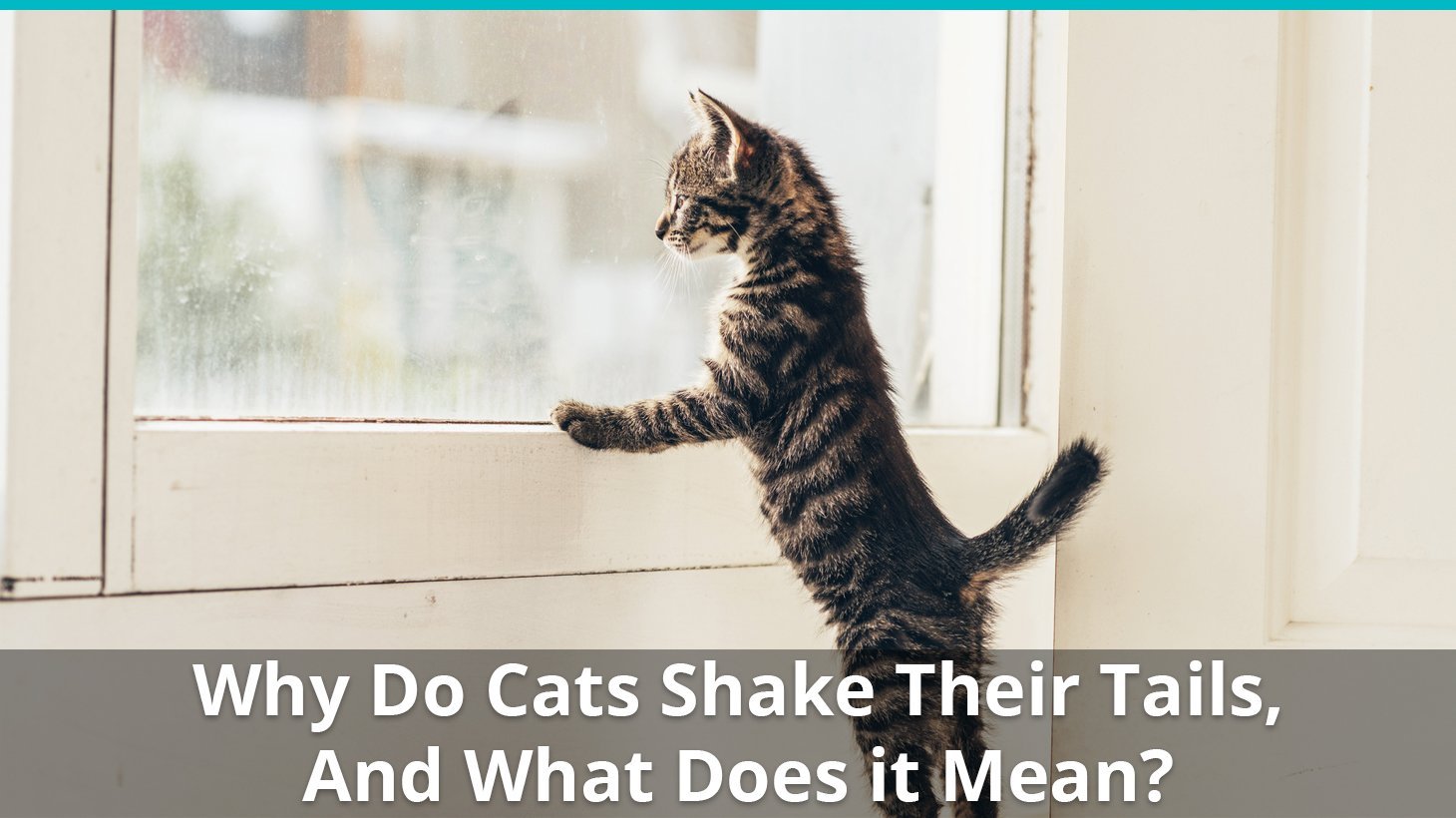 Understanding a cat’s mood and needs can prove difficult even for experienced pet parents. Cats communicate mainly through body language or vocalization.

But even if your pet kitty doesn’t have a problem with speaking its mind through meows, yowls, and chirps, the fact that you don’t speak meow makes communication hard. So all that’s really left for you to try and do is to monitor your beloved furball in order to read its body language.

One of the most expressive aspects of the feline body language is the tail position. Unless you own a bob-tailed breed like the Highlander or the Pixie-Bob, you can learn a lot just from the way your cat is moving or positioning its tail in various situations.

Out of the many ways a cat can move its tail, a particularly interesting movement is shaking, or vibrating (not to be confused with wagging).

When cats shake their tails, they express a variety of emotions. The shaking/ vibrating can affect either the entire tail or just its tip. It usually occurs when the tail is facing upwards or is slightly bent at the tip.

So What Does It Mean When Your Cat Is Shaking Its Tail And Why Do They Do It?

Depending on the situation and the cat’s surroundings, it can either give off positive or negative emotions. Here are the basic feelings a cat with a shaking/ vibrating tail is experiencing.

When the upper part of your fluffy friend’s tail is vibrating or shaking, it means your kitty is anxious about something. The restless mood can be triggered by numerous things – even something as simple as not being able to find its favorite cat toy.

Cats have enviably heightened senses and as such, they can actually sense things we, human beings, would completely miss. So your kitty’s anxiety could be the result of a noise you didn’t hear or some odor which you can’t smell.

If the cat is residing in a house or apartment with a noisy family, it can develop chronic anxiety. Moreover, it can also start developing a number of health disorders caused by stress, such as skin problems. Some cats are suitable for big families and noisy environments, but others aren’t that laid-back.

If your pet’s upper tail is vibrating and she’s anxious on a daily basis, you should try making the kitty’s room quieter and more comfortable.

Cats can get annoyed by basically everything. The easiest ways to anger your beloved furball is to not pay enough attention to it or to go to the other extreme.

If your cat is shaking or vibrating its tail during long play sessions, it’s time to leave it alone. Trying too hard to make it perform tricks or hugging/ squeezing/ petting it too much will ultimately result in irritating your kitty. You should be looking out for tail shaking when house guests or children are trying to play with the cat. Putting a timely stop to their attempts to bond with your pet can prevent aggressive behavior on the cat’s behalf. Best-case scenario – the cat will run away. Worst-case scenario – an accident could occur.

As the cat’s annoyance escalates, the vibrating will transform into rapid tail whipping. Should the feline’s tail or the fur on the rest of its body bristle, you must allow it some time to calm down.

In most cases the shaking tail is a sign of negative emotions, but there are exceptions to every rule. In other words, it’s also possible for your cat to be happy or excited when its tail is vibrating.

This can occur if you own a dog-like loyal cat and it’s coming to greet you whenever you arrive home. The upright tail with a vibrating tip is a clear sign of excitement, whether a human, animal, or an inanimate object is causing it.

You might spot your pet performing this tail movement whenever it’s sitting on the window perch, while monitoring something outside.

Another common situation in which the shaking tail indicates excitement is when you open a new can of cat food just as your pet is hurrying towards its food bowl.

I remember my grandmother’s cat used to stand in the kitchen and vibrate her tail whenever her little package of treats was brought out.

Your pet kitty’s hyperactive tail is the most expressive fragment of its body language.

Other expressive aspects include its ears, eyes, and overall sitting/ standing/ lying positions. Regardless of the situation, it’s important to monitor your precious furball’s body language. Learning how to decipher it will help you understand your cat’s emotions, needs, and possible reactions to its surroundings.

3 thoughts on “Why Do Cats Shake Or Vibrate Their Tails, And What Does it Mean?”