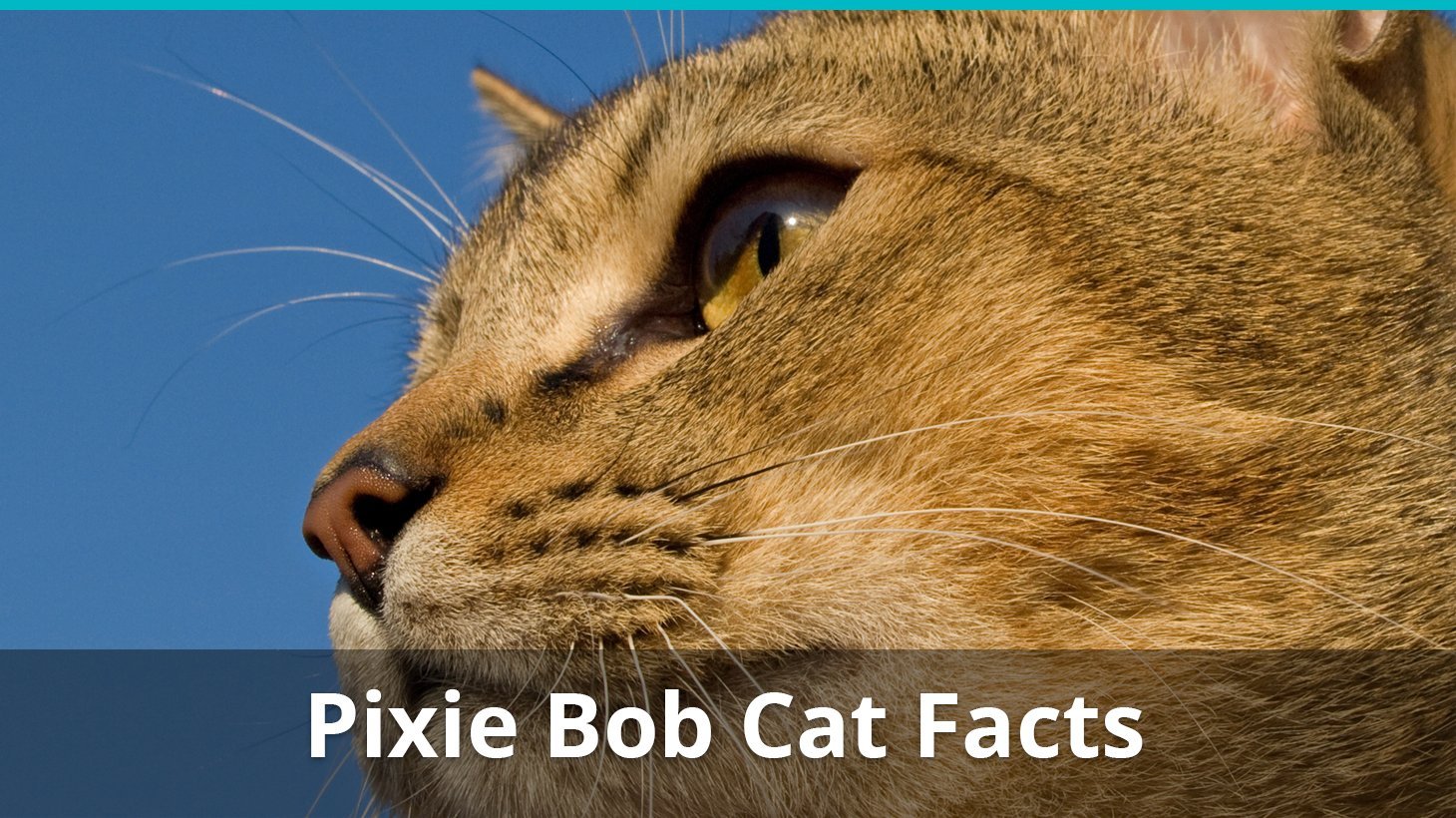 One of the most interesting and controversial felines out there is the Pixie-Bob breed, named after one of the very first Pixie Bob kitty’s parents.

These cats are controversial due to their alleged origins. The breed was developed in 1986 in Washington State by Carol Ann Brewer and is allegedly a result of the mating of two naturally-bobtailed cats, one of which was the offspring of a bobcat. However, DNA tests showed that the new Pixie Bob kittens, which Brewer started breeding, didn’t carry any wildcat genes.

Unlike many exotic and designer breeds Pixie Bobs still don’t show any traces of wildcat DNA even nowadays, decades after they were officially recognized as a new breed. Thus, pedigree Pixie Bobs aren’t exactly a designer breed, but they are considered rare.

Though they are pedigreed, they don’t have particularly special nutritional requirements. All they really need is high-quality cat food, like all other kitties. You can feed them with dry or wet canned food. They aren’t picky about their food and as long as it’s providing them with essential vitamins, amino acids, and minerals, instead of fillers and grains, they will be healthy and happy.

The lack of special dietary requirements isn’t the only factor that makes this breed easy to care for. Their easygoing, amiable, and patient tempers make them ideal even for first-time cat owners. Furthermore, grooming them consists of brushing their hair twice a week. And that’s definitely something that can’t be said for many other feline breeds!

Here are a few interesting facts about this rare breed, which will give you some further insight into its characteristics and temperament.

All Pixie Bobs Are Born Bobtailed

The bobbed tails and the fluffy fur coats are among the Pixies’ most notable physical characteristics. The first kittens were born from two naturally bobtailed parents. The mutation genes which had affected the parents’ tails by making them significantly shorter remain prevalent in the breed even today.

They’re all born either with moderately short tails or with seemingly no tails, depending on how dominant the gene is.

The Mekong Bobtail, which is a variation of the Siamese cat, the Highlander, and the Manx, are some other popular feline breeds with natural bobtails.

Think all cats are capricious? You haven’t met the Pixie Bob! They are famous for their easygoing temperaments. Unlike other furballs, these pals don’t fuss about anything – from food to attention.

Pixies won’t mind you snuggling with them or ignoring them due to chores. They also won’t mind you inviting strangers over who are eager to meet your fluffy pet. And as long as they have toys and food, they won’t mind being left home alone for a few hours.

Owning a Pixie-Bob means you won’t have to worry about catering to your cat’s every whim. They’re laid-back and low-key!

While Pixies are tolerant and laid-back, it doesn’t mean that they are lazy. On the contrary! Pixies are extremely energetic.

They’ll never shy away from play sessions, even if this means playing with a friend of yours whom they’ve just met! Purchasing an interactive pet camera with built-in laser chasing games is a great way to keep an eye on these cats if you have to leave them home alone. They aren’t destructive by nature, but they do love climbing and jumping, so a broken vase or other similar accident might occur.

Another option to keep them entertained and properly exercised is to purchase a cat tree that offers multiple levels and interaction for your Pixie Bob kitty.

Pixie Bobs aren’t whimsical and won’t act needy, but they do have social needs. They are a notoriously sociable breed and adore all sorts of human interaction. They won’t hide under the couch or act territorial upon the arrival of some stranger in your home. The Pixie’s affable nature will make it run off to the stranger to sniff and befriend him/ her in an instant!

Their friendly nature is one of the many reasons why you should keep your Pixie Bob kitty strictly indoors. Of course, outdoor diseases, fleas, and other parasites are also factors, but the biggest risk is that the cat might decide to bolt from your yard to explore the outside world and make some new friends along the way.

This breed is quite intelligent and amenable to training and learning various tricks. You can teach them how to respond to their name, how to give you high fives, how to stand up, and even how to jump through hoops!

As long as you’re patient and consistent, and you’re always applying positive reinforcement techniques, your Pixie will learn new commands in no time.

Most felines have oval paws, but this particular breed has almost round ones. What’s more, the Pixie Bob’s paws are polydactyl. That means they have some extra toes on their fluffy paws.

This is caused by a genetic mutation which also occurs in human beings. Polydactylism may affect any one of its paws, as well as all of them.

Similar to Oriental Shorthair cats, Pixie Bobs are vocal kitties. They aren’t shy about speaking their mind. However, they also aren’t big on demands or complaining. As such, it’s rare for a Pixie to meow to bring your attention to it.

However, they do like vocalizing their thoughts, mostly through purring and chirp-like sounds. They’re laid-back, but also cheerfully talkative.

This breed is an ideal choice for first-time pet parents, who have never owned a cat before. These kitties adapt to new people and unfamiliar surroundings almost immediately. Pixies are among the easiest cats to move with and they are also far less likely to be troublesome during traveling than most feline creatures.

Pixies also make great companions for big families with kids due to their friendly and tolerant ways. Moreover, they are also suitable for residing with other pets such as dogs. Of course, not all dog breeds can co-exist with a feline furball. It’s best to opt for an amiable and laid-back canine like a beagle or Labrador.

They Have An Average Life Expectancy

Their lifespan is about average for a kitty, somewhere between the 12 and 16-year range.

How much do Pixie-Bob cats and kittens cost? Price analysis and buying guide.

Pixie Bobs may be rare, but their price tag definitely isn’t as expensive as the prices of other rare feline breeds. In fact, if you look at the average buying price of a Pixie Bob, these bob-tailed creatures are actually affordable.

So, how much do Pixie-Bob cats and kittens cost? Roughly the same in different countries across the globe. Here are some quick pointers:

This is one of the few breeds, which major cat organizations officially recognize as polydactyl. And if you want to buy a Pixie-Bob that has 3 extra toes instead of one, that won’t cost you extra bucks. On the other hand, finding a good Pixie Bob breeder will be a bit trickier.

What’s more, many Pixie Bob kittens are actually a mixture of two or more different breeds. And due to the natural genetic diversity of these furballs, even pure-bred kittens might have recessive traces of non-pure DNA.

Buying guide tip for Pixie Bobs – do thorough research on the available kittens in your country. Don’t opt for overhyped breeders and beware of mix kittens with a $300-$400 price tag.

Health Problems To Be Aware Of

No kitty out there is 100% disease-proof, and usually-healthy Pixie Bobs aren’t an exception to this rule. The most common feline disease is hypertrophic cardiomyopathy. While not many cases have been reported of Pixies suffering from this disease, they are not immune.

It’s rare for a female Pixie Bob to suffer diseases linked to pregnancy and delivery, but there are recorded cases where Pixies have had cystic endometrial hyperplasia and dystocia.

If you’re having doubts regarding your feline pal’s mental or physical health, immediately schedule an appointment with the vet, and don’t ever miss annual or monthly check-ups.

Pixie Bobs are among the most unpretentious and easy-care-for feline breeds on the planet. Their playfulness, intelligence, notorious adaptability, and lack of special grooming or dietary needs make them suitable for inexperienced owners. However, this doesn’t mean that you should neglect them. If you devote your time and efforts to maintaining the health and happiness of the Pixie Bob, it will cherish you for the rest of its lifetime.