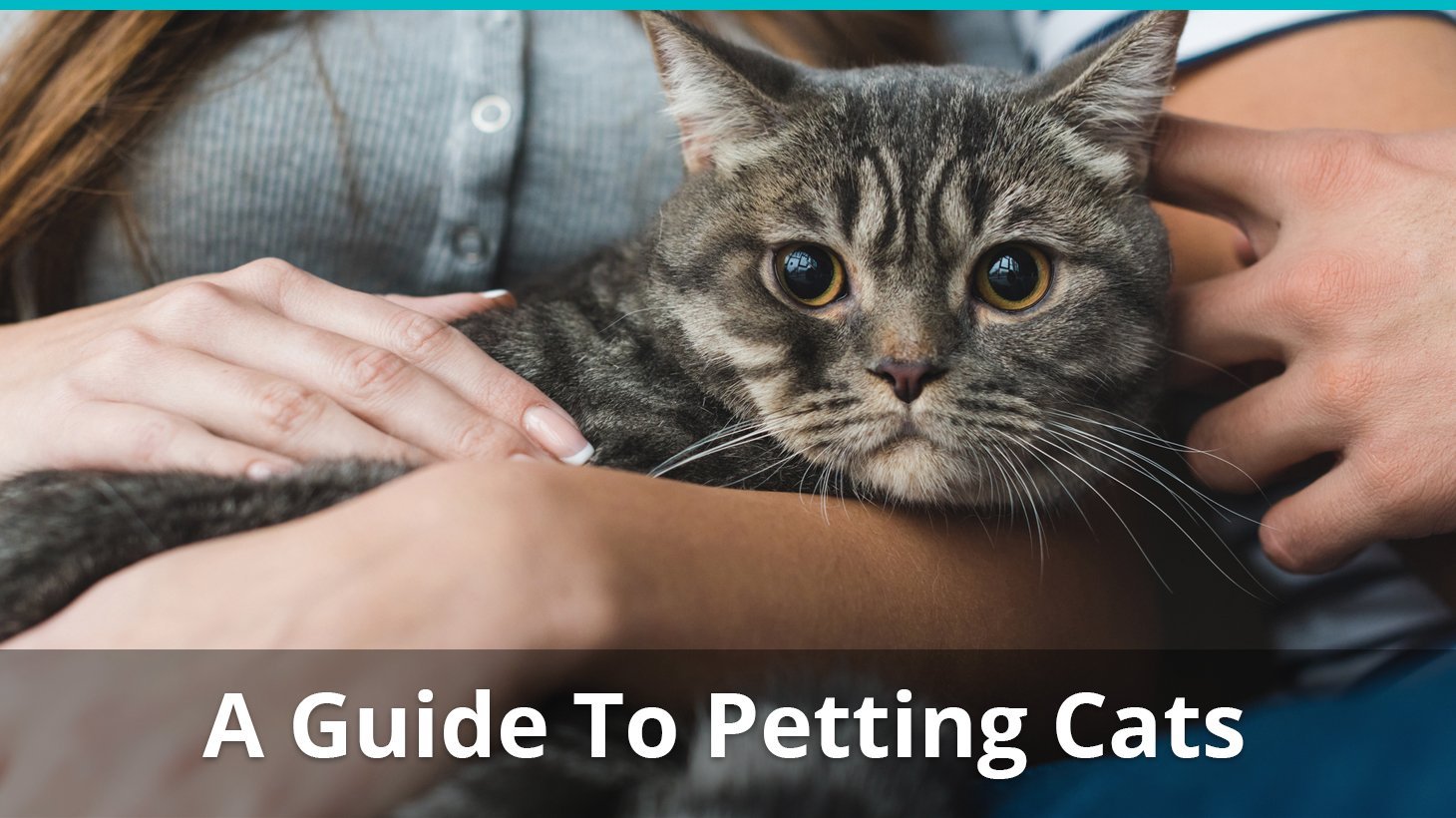 One of the best things about owning a kitty is that you can snuggle, stroke and pet its fluffy fur.

Even cat breeds that are hairless, such as the Donskoy or Sphynx, have a layer of fluff which is awesomely velvety and pleasant to the touch. Of course, cats require special skin and fur care in order to be so enjoyable when you’re petting them, but that’s not what we’re going to talk about today.

Instead, we’ll cover the proper (and improper) ways to pet your feline pal. Our guide will teach you how and where to pet your kitty in order to make the experience pleasant for the cat and to avoid any possible incidents.

And before you claim that you know exactly how to handle a feline furball just because you’re a pet parent, don’t forget that each cat is unique on its own and it’s never too late to learn something new.

How To Pet A Cat

It’s a well-known rule that cats don’t like being squeezed. And that’s one of the main reasons as to why felines tend to dislike children. Even if your kitty happens to tolerate some tough love and appears as though it doesn’t mind being squeezed, it doesn’t really like it. Forceful petting and padding also aren’t proper ways to handle a cat – after all, it’s not a Labrador.

Cats should be handled with care. Soft strokes and caresses are ideal for them. Massaging and light scratch-like movements are also particularly enjoyable. That’s why many cats take great pleasure into being brushed or combed with cat brushes that have soft silicone tips.

Being gentle, however, doesn’t mean that you should barely touch your feline furball.

On the contrary – cats adore being stroked by their owners almost 24/7. Notably tolerant and lazy breeds won’t mind some rough petting, but you should be careful. A feline’s skin and fur are much more sensitive than you might expect.

Speaking of expectations, a lack of purring doesn’t mean that your kitty isn’t enjoying the way you’re petting it. Not all cats purr.

Some cats are less sociable than others. If yours happens to be one of them, it might act reserved towards your attempts to pet it. And it probably won’t show you that it likes the way you’re touching it. Encourage the cat to be open to the idea of petting with small amounts of food or some cat treats. This way it will associate the experience of being petted with something pleasurable and rewarding.

Cat Petting Zones: Where To Pet A Cat

Even though each feline furball is unique, there are a few sweet spots where almost all cats enjoy being petted.

The chin and the neck areas are not only safe, but they are also among these sweet spots. Felines adore being stroked in these areas and they might even rub them against you when they’re seeking your attention.

Between And Behind The Ears

Between and behind the ears is another area where cats love being petted. Use gentle pressure when stroking the cat and keep an eye out for visible signs of content, such as purring, half-closed eyes, arched back and soft rotation of the head and the whiskers.

The back area is another sweet spot. You can safely pet your kitty starting from the back of its head to the base of its tail, but don’t touch the tail. Keep going only in one direction towards the tail because kitties genuinely don’t like being petted the other way around.

You can also pet the cat sideways if it’s lying on its side and if it appears to be relaxed in your presence. You can try this only if the kitty is next to you or in your lap. Otherwise it might feel threatened by the chance of accidental belly rubs.

The tail should be off limits. The motions of a twitching tail are often interesting for children, but warn the kids to stay away from the kitty’s tail.

Belly rubs are also a bad idea. One of the most relaxed and vulnerable sleeping positions of any cat out there is when it’s lying with its belly fully exposed because it’s feeling trustworthy towards its surroundings and its owner. If your cat likes sleeping in this position, then it fully trusts you that you won’t do anything harmful and won’t touch its most vulnerable body parts. Don’t betray its trust with belly rubs!

The paws are among the most sensitive spots on any feline’s body. Don’t rub them at all. Some kitties like it when their owners are playing with their feet during play sessions, but these areas should be avoided when it comes to petting. However, if you worked to desensitize your kitty while she was a kitten by purposely touching her paws, she may be fine with it.

For more off limits zones, check out this funny, yet quite accurate picture below. 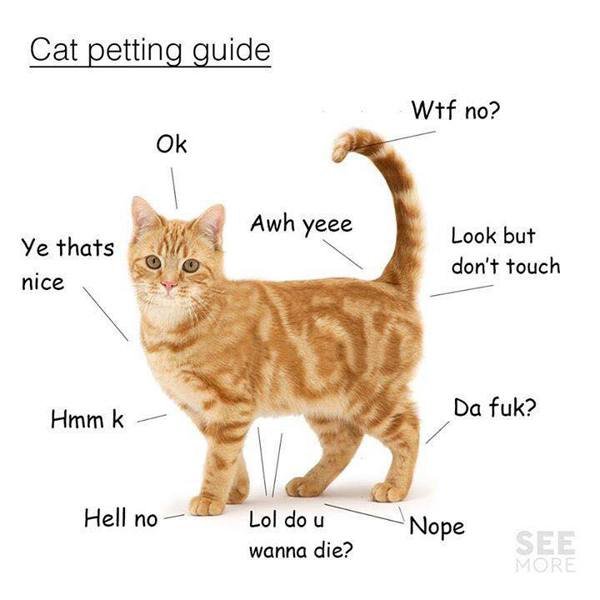 The Do’s And Don’t’s

As stated above, each cat out there is unique on its own. Nevertheless, there are a few simple dos and don’ts which you should keep in mind whenever you want to pet your beloved kitty.

Don’t pet the cat when it’s eating or drinking. This one is rather obvious, but some pet parents still tend to pet their cats whenever they’ve decided to not be finicky about food or have agreed to drink the medicine dissolved in their water bowl.

Never pet your feline as a way to calm it down after it’s done something bad or after it’s created a mess. Scolding, yelling or punishing the kitty isn’t the answer, but neither is petting. If you’re trying to apply the positive reinforcement technique in cases like these, it will only confuse your furball. And it might misunderstand your actions as a reward for doing something good instead of something bad.

Don’t be forceful. Don’t pet the kitty if it’s not in the mood for snuggling or if its attention is preoccupied with something else. Fidgeting, hissing, bristling and dodging your hands are typical signs that the cat doesn’t want you to pet it.

Do handle your precious furball gently. Petting is a way of expressing affection, so be gentle and use soft, massaging-like strokes.

Focus on the sweet spots around the head. There are many scent glands near the kitty’s ears and mouth areas and by petting it there you’re basically making your cat scent-mark you as its owner.

Lightly scratching your pet is fine if you keep your fingers moving and you aren’t scratching only one area. Keep in mind that the scratching should be light and with moderate pressure.

Do pet your kitty whenever it’s rubbing against you, poking at you or trying to jump into your lap. Not paying enough attention can result in destructive behavior. Scratches on the furniture or pee puddles outside the litter box are just a couple destructive outcomes.

And lastly – have fun. Instead of overthinking what you should do and what you shouldn’t, just enjoy the time you’re spending with your precious feline furball. Show it some love and affection and it will cherish you in its own special, purr-fect way.