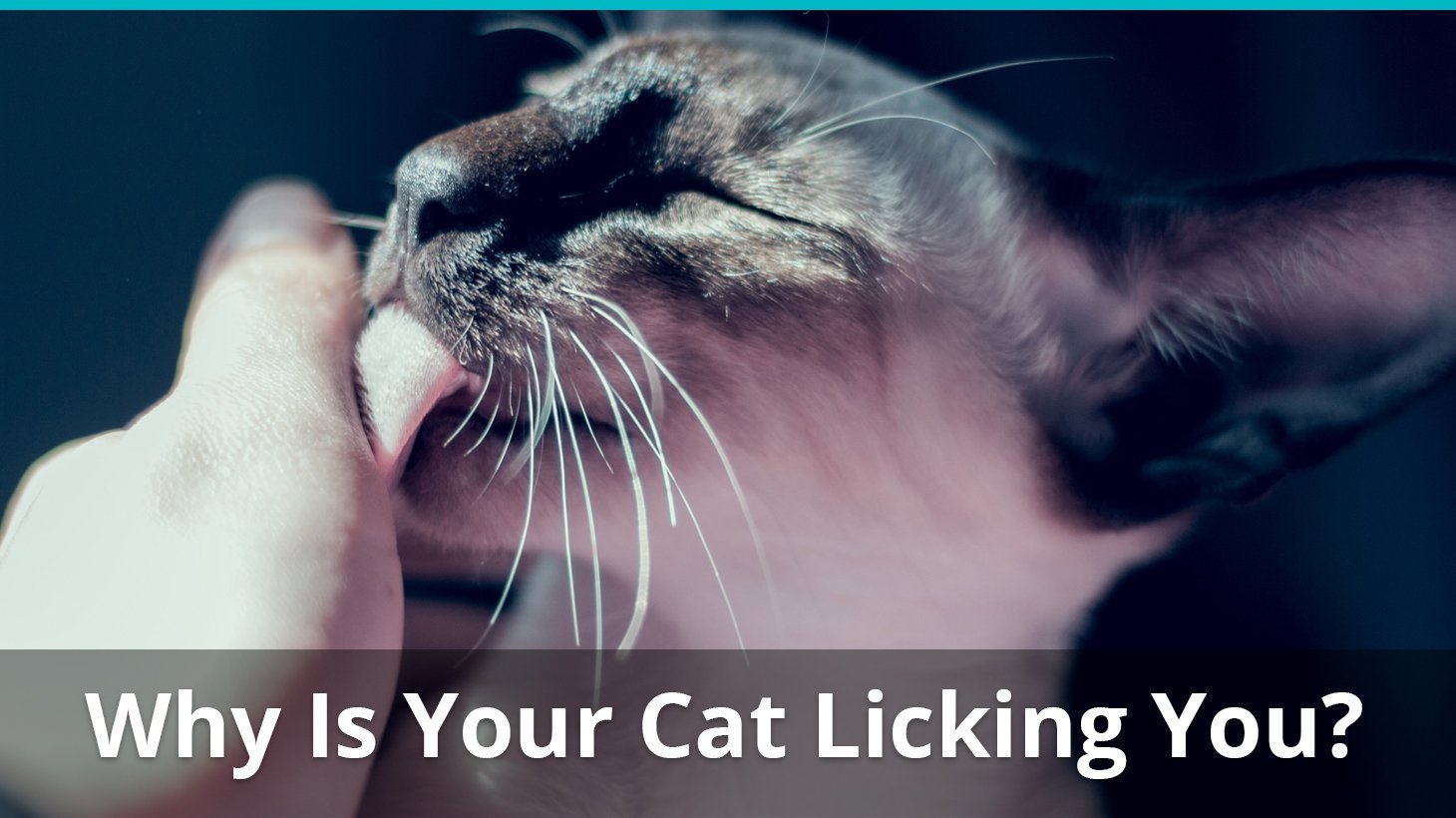 Cats of all breeds and ages can become extremely attached to their owners.

Even if you happen to be the owner of a notoriously independent feline breed, it’s possible for your precious furball to start acting as loyal and as affectionate as a lap dog, always licking you and rubbing up against you.

And that’s not always a bad thing as long as the kitty isn’t driving you insane with its clingy behavior.

Felines can show their affection in numerous ways. They can vocalize and purr, sleep on your lap, snuggle with you or follow you around even when you head to the bathroom.

But as you know, one of the most curious displays of affection is licking.

It’s curious because dogs are much more prone to “kissing” their pet parents rather than cats. So when your cat brushes you with its tongue, it’s only natural to ask yourself – why is my cat licking me?

Cats use their tongues and teeth for cleaning and grooming purposes. So does that mean your pet is trying to clean you up? Or is it just kissing you?

Well, it actually depends on the situation and the cat’s current mood. Your fluffy pal could be licking you for a number of reasons due to the various ways it can perceive a given situation.

Truth be told, the reason behind the licking can be either positive or troublesome. Let’s review the most common reasons for this behavior in further detail so that you can answer for yourself why your pet is licking you at any exact moment.

Why Is My Cat Licking Me? What Does It Mean?

You’ve Got An Appealing Scent Or Taste

If your kitty has never licked you before and is doing it now, you could simply smell appealing to it. Felines have extremely evolved senses, including an enviably strong olfaction. If your face or hands have an appealing scent/ taste, your furball will be tempted to lick your skin.

As curious, playful and often unpredictable as cats are, they want to explore and get a taste of everything. Some things have a particularly intriguing scent to felines. Take coconut oil, catnip and even antifreeze for example.

Chances are your skin won’t smell like antifreeze, but it may smell like something else, which the kitty finds pleasant enough to lick.

A Way Of Claiming You

Cats can act territorial in a variety of ways. They don’t need to pee on something in order to scent-mark it. Kitties often lick other animals, even if they aren’t siblings from the same litter. By licking you your pet is claiming you as its human and as a part of its territory. Moreover, it’s also marking you as its faithful companion.

Unfortunately, such behavior can sometimes hint jealousy or fear that the cat’s territory is being invaded. Felines can basically perceive anything and anyone as invasive – from a new piece of furniture to a stranger visitor.

Side Effect Of Premature Weaning

If the mother has prematurely weaned the cat or if it has been adopted at a young age, it could lick its pet parent as a side effect of missing out on its birth mom’s natural cares. Excessive licking and kneading are common for orphaned kittens.

This type of behavior can easily be explained as a substitute to suckling and need of some soothing comfort. Unless your pet develops a fixation with licking and sucking on your skin, it will eventually grow out of it.

If your cat is licking your hair, beard, or eyebrows, then it’s simply grooming you. Cats have an inborn instinct of untangling any matted fur and particles stuck on their own hair. They are using their tongues just like you’d use a cat brush on your pet.

By licking your hair the kitty is basically grooming you. It also shows that your pet not only trusts you, but also wants some bonding time with you. When cats groom each other or their pet parents, it’s a way of showing friendship, devotion and care.

Felines can experience a variety of emotions and one of them is anxiety. Compulsive licking is among the telltale signs of high anxiety. The cat may lick itself, its pet parent or even an inanimate object, like its favorite toy.

In such cases it’s of intrinsic importance to calm down your precious pal. Pet it with gentle, soothing strokes or hug it. Speak in a low, calming voice. Try to distract it in any possible way instead of opting for more extreme measures, such as relaxants and sedatives.

Yes, the licking can simply mean that your cat is trying to “kiss” you the way a loyal puppy would lovingly lick your face. Think of it as the feline version of petting you. Your pal is just showing you how much it adores you. Licking as a form of displaying affection proves that the cat trusts you, feels comfortable, happy, and truly devoted to you.

What To Do When Your Cat Is Licking You

Let’s face it, nobody wants saliva dripping all over them. On top of that, the experience of being licked by a cat’s rough tongue can be a bit unpleasant, to say the least. The barbed, sandy feline tongue brings a ticklish, irritating, and even sore sensation.

The “armored” tongue can seriously irritate your skin and can be quite painful. If your cat is licking you out of seeking comfort or soothing its own anxiety, you need to help it relax.

If it’s just out of devotion, you also need to make it stop for your own sake. Do not punish the kitty for its actions. And do not give it food or treats, otherwise it will immediately start associating the licking with a rewarding experience.

Your best option is to distract the cat with something else. Felines can be perceptive, but that doesn’t mean that they know what they must and mustn’t do. It’s your job as a pet parent to teach your cat the proper way to behave.

Last, but not least, if the excessive licking continues as a form of chronic anxiety, seek a professional’s help. If you’re suspecting something’s wrong with your kitty, schedule an appointment with the vet. Don’t ever neglect your furball’s needs and make its well-being a priority.