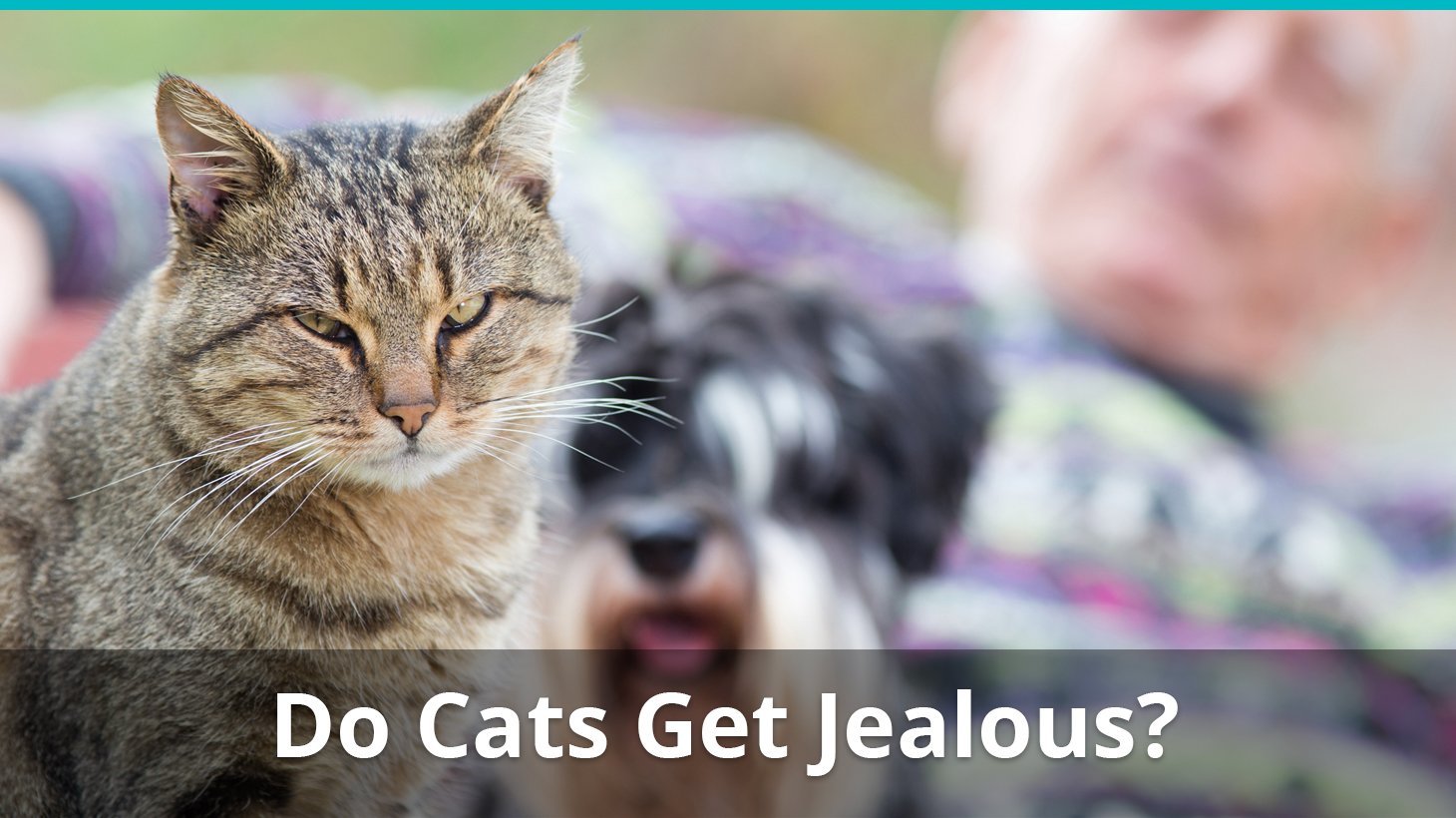 Pet parents all over the world tend to give their cats human-like traits. Anthropomorphizing our beloved feline furballs is a common pastime!

We say that cats love us, that they can understand us, and that they have human-like emotions. So the question might naturally arise–can cats get jealous just like human beings?

Yes, Cats Can Get Jealous.

It’s not uncommon for a feline to feel  territorial. The predominant feeling for many cats is “MINE!” when it comes to their living area and/or pet parents. You may experience the same feelings toward your own house or loved ones!

Felines can easily get jealous of cats, dogs, and other animals. They can also get jealous if their owners are being more attentive to daily tasks or to a house guest. This could result in a cat sprawling across your keyboard, for instance, to demand its quota of daily cuddles.

Some breeds, such as the Pixie Bob and the Maine Coon, are quite laid-back, easy-going, and tolerant of strangers. They typically don’t mind sharing their owners’ attention with other pets or people. Of course, each cat is unique. As a result, even a notably tolerant feline breed can show excessive jealousy.

Why Do Cats Get Jealous?

Why do you, as a human, get jealous, while others may not? Some humans and felines are simply made that way.

For example, one particularly jealous cat breed is the Oriental Shorthair. These furballs adore being the center of attention and they’ll do anything to achieve that. They aren’t happy when their owners are being more attentive to other humans, animals, or even inanimate objects while carrying out their daily tasks.

Feline jealousy depends on the cat’s personality and temper, as well as on its upbringing, level of socialization, and overall interaction with its pet parent.

There are, however, several common reasons behind your kitty’s jealous feelings.

If your beloved furball isn’t convinced of your unconditional love, it may jealous for seemingly no reason at all.

Insecurity usually comes after the cat has experienced a heartbreaking moment such as a parting with its previous owner or a similar unpleasant memory. The kitty may feel unconvinced that it won’t also lose your affection, so you’ll have to prove yourself (potentially over and over.)

Cats which lack enough socialization with other animals or humans easily experience jealousy. When faced with a social encounter, they may act out improperly because they’ve never been taught better.

Whether it’s studying, working, watching TV, or doing house chores, people have daily tasks. Much as you might like to, you can’t engage in training sessions or play time with the kitty 24/7. But when the cat feels like it’s not getting enough bonding time with its owner, it becomes a problem.

What Happens When Cats Get Jealous? Meanings And Signs

You’ll spot behavioral changes, which will indicate that something’s wrong with your cat. Your fluffy pet won’t act out each time it gets jealous, but when it does, you’ll definitely notice it.

Aggressive behavior such as hissing, scratching, biting, and attacking you or the other person/ animal/ inanimate object which triggered the jealousy is common. The cat may also pee on the carpet or try to scratch the furniture. Basically, your furball will try to get revenge for the way it’s feeling. And that means attacking whatever it thinks will make a clear point.

The kitty may start acting lethargic, shy, and depressed because of basic insecurity. For any number of reasons, it may feel like your love is about to be withdrawn permanently and this can set it into a tailspin.

A common type of jealous behavior is fawning. Purring, rubbing against you, pleading with excessive meowing, and so forth are typical signs of fawning. This is basically your cat’s way of obtaining your attention.

If you encourage the cat by teasing it on purpose, laughing at it, or purposely not showing it attention when the jealous behavior seems amusing, your actions will only worsen the situation. Kitties do get hurt feelings!

If you can’t devote your time to attending to your kitty’s needs, think twice before adopting a cat. You can also opt for a more independent and laid-back breed. Another option is to stock up on interactive cat toys to keep the kitty entertained and exercised. Nevertheless, every cat out there needs love and attention, so don’t neglect your furball’s needs.

7 thoughts on “Can Cats Get Jealous Of Other Cats, Dogs, Or Humans? Signs And Behavior”