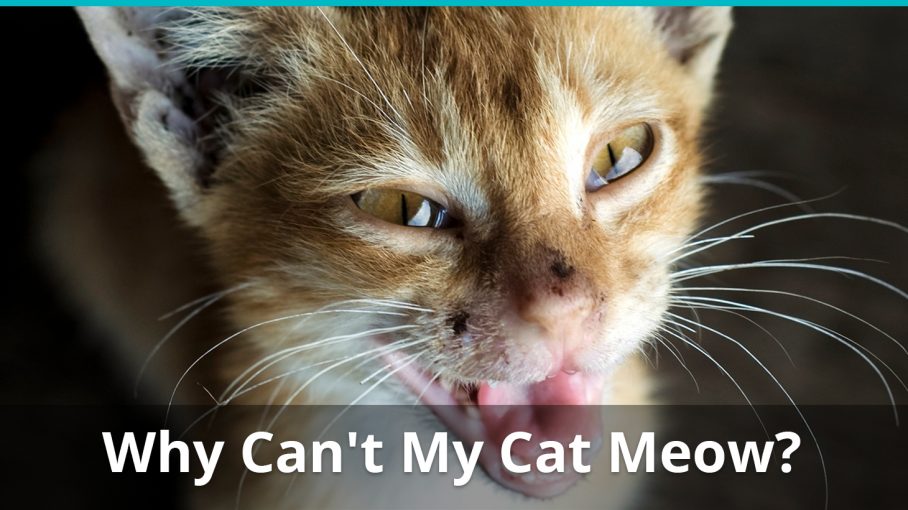 Why Can’t My Cat Meow? What Causes A Cat To Stop Meowing Or Have A Raspy Or Hoarse Meow

Some feline breeds are more vocal than others by default.

Take the Oriental Shorthair for example. These furballs can meow, chirp, and make all sorts of crazy sounds when they want to speak their minds. Other breeds are shyer when it comes to expressing their opinion. They won’t meow or even purr unless it’s a special occasion or they’re really craving your attention.

Whether your cat is vocal or not doesn’t just depend on its breed. Each kitty is unique, so your pet’s tendencies towards vocalizing also depend on its personality.

Cats meow for things like food, playtime, or something else that’s making them excited, worried, or just restless. Sometimes you can even tell if a cat is depressed or angry by the tone of its meowing. But what about when it’s not meowing at all?

As if not speaking cat language isn’t already hard for you, is it really possible for your pet to just stop vocalizing all of a sudden? Yes, it is.

It’s often a telltale sign that you need to take your kitty to the vet’s office for a check-up.

Why Is My Cat Not Meowing?

Here are the most common reasons why your kitty has stopped meowing, or has developed a raspy or hoarse meow.

If you’ve recently moved to a new home, your cat may still be getting accustomed to it.

Sometimes having visitors spend the night or getting a bunch of new furniture pieces could also result in a lack of meowing.

Separation anxiety can also trigger this type of behavior, even though it’s more common for depressed or anxious felines to meow constantly instead of keeping quiet.

Another psychological reason for the lack of meowing is a cat’s personal association with meowing. If something painful or hurtful happened the last time it tried to speak, it could be suppressing its voice on purpose. Such post-traumatic behavior is often accompanied by other symptoms like loss of appetite, lethargy, or destructive behavior.

Another reason for the lack of meowing could be a temporary loss of voice. Similar to how you lose your voice when you’ve been shouting all night long at a concert, your kitty could also go through something similar.

It’s highly unlikely that your pet was at a concert when you left it home alone. But if it was constantly meowing during that time, your cat may be suffering from a sore throat.

So yes, cats can briefly lose their voice from excessive meowing.

The temporary voice loss isn’t a reason to panic. Your cat should get back to its normal vocalization in a couple of days.

Even overall healthy feline breeds can develop respiratory infections, regardless of their age. Among the most common upper respiratory diseases in cats is feline herpes.

Colds, allergies, calicivirus, and other similar respiratory issues can easily cause a sudden loss of meowing. These ailments are often accompanied by one or more of the following symptoms:

If you think your cat has an upper respiratory infection or a respiratory condition, call your vet.

If you’re allowing your pet to roam the outdoors freely, it could eventually contract rabies from another infected animal.

Rabies often causes a hoarse voice to such an extent that it may seem as though a cat is only opening its mouth without producing any meow-like sounds. If there’s the slightest chance your kitty has been near a rabid animal, you must take it to the vet’s office immediately.

Polyps, tumors, cancers, and other types of growths could develop inside your cat’s mouth, on its vocal cords, and in other areas such as inside its throat. These growths can change your pet’s meowing and the way it sounds, and they can also lead to a permanent lack of meowing.

Some of these health issues often result in other side effects apart from the loss of voice. These include sneezing, respiratory issues, and even ear infections.

This condition is more prevalent in canines, but it can also affect cats.

Hyperthyroidism is a health disorder caused by hyperactive thyroid glands. Senior cats are more prone to developing it than their younger counterparts.

While it does happen, this isn’t a common cause for cats to lose their meow. Veterinarian Michelle Burch explains…

It is very rare to see a cat lose its meow with hyperthyroidism. It is possible, and I have seen 1-2 cats with this symptom, but their thyroid tumor was significantly larger than the normal. Usually, with hyperthyroidism, clients will see an increase in meowing, especially at night time with their cats.

Another possible reason for the loss of a cat’s meow is damage to the nerve controlling the voice box. This impairment can be from either external compression or internal trauma.

The damage is often caused by foreign bodies, such as grass blades or twigs, in the laryngeal region.

If your cat has had a recent surgery requiring anesthesia, she may have had a tube inserted into her air passageway for ventilation.

The intubation process can irritate the vocal cords, causing internal inflammation. Sometimes, this results in the temporary loss of your cat’s meow.

If this is the case, your cat should be back to its vocal self within a week.

The content in this article was reviewed and approved by veterinarian Michelle Burch.

When To Seek Help

If your cat’s meowing has been hoarse or completely silent for two days or more, and you are not sure why, call your vet.

There’s a chance that it’s nothing serious and that it will pass. However, it is better to seek professional help early rather than wait too long.

Thank you so much. Going to take my cat to the vet. He’s acting strange.