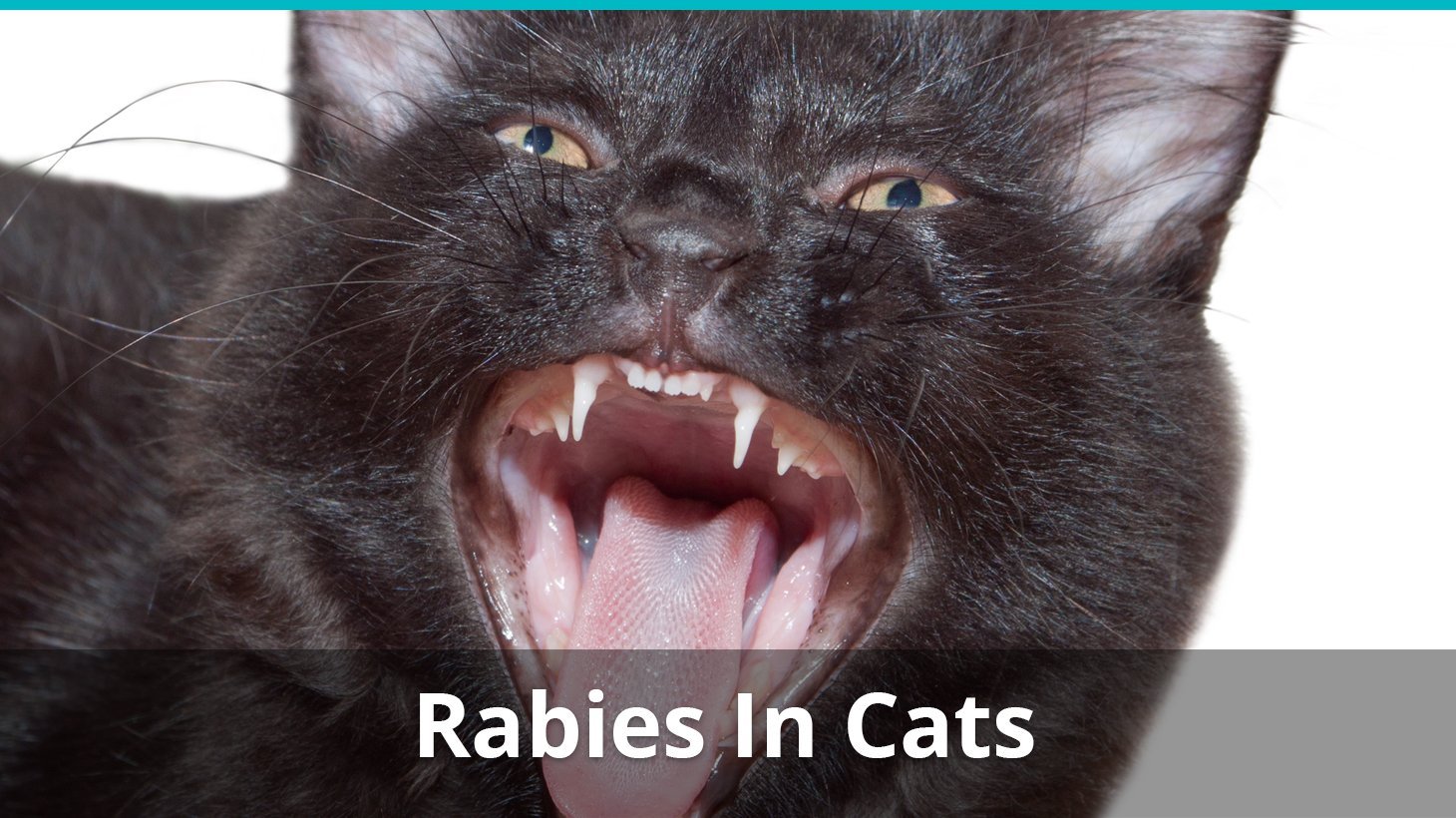 When you think about the word “rabies”, you probably associate it with sheer horror. And for good reasons.

Not only is the rabies virus deadly, but it’s found all over the globe and can affect cats, dogs, and other mammals alike – including human beings.

Other than the obvious, rabies is so dangerous because the symptoms may not present themselves over long periods. They might not show up even for a few months!

The post-symptom survival rate of rabies-infected mammals is low, even when vets administer preventative medicine.

In other words, rabies is highly dangerous and you shouldn’t take it lightly.

Since it can be transferred to humans and pets alike, it’s of extreme importance to not rule out the possibility that your cat might have rabies – especially if it has been bitten or scratched by another animal. Making sure your fluffy pal is up to date with its shots guarantees its safety, as well as your own.

What Is Feline Rabies In Cats And Kittens?

Rabies is a fatal viral disease. As mentioned above, it can affect any mammal, including human beings.

Rabies in cats is a common issue in many countries where feline overpopulation of feral cats is present. The disease affects the animal’s brain and its spinal cord, thus leading to a lethal outcome.

The rabies virus is widespread across the globe. However, reports have shown that in the US it mostly affects cats rather than other domestic animals.

How Does Rabies In Cats Affect The Animal?

This process may take a few days, weeks or even months.

The rabies virus eventually affects the entire nervous system. As such, when the virus becomes active, it causes confusion, disorientation, aggression, loss of appetite, erratic behavior and other problematic outcomes like paralysis and seizures. If left untreated, the rabies symptoms will worsen, eventually leading to the cat’s death.

How Can A Cat Contract Rabies?

As mentioned above, rabies can be transmitted through a bite wound or a scratch mark. Dogs, cats, bats, foxes, ferrets, raccoons, and all types of mammals can give your cat rabies.

According to the ASPCA, somewhere around 3.2 million cats end up in shelters on an annual basis in the US alone. On top of that, countless felines end up homeless on the streets.

These feral cats, as well as the ones in shelters, can easily contract rabies from other animals. Thus, if you’re allowing your pet to roam the outdoors freely, it may get the virus from a rabid feral cat.

On the other hand, it could also get it from the shelter or even from a seemingly harmless walk on a leash.

Even though the rabies virus usually travels through bite wounds, your pet kitty can contract it from the saliva of a rabid animal. Moreover, scratches can also transmit the disease. As soon as your cat’s bloodstream, eyes, nose or mouth come into contact with the virus, your feline pal will get infected.

Since the rabies virus causes groundless aggression, if your cat happens to be near a rabid animal, the chances of an attack, scratch or bite wound are extremely high. In other words, your pet should be under strict supervision whenever it’s leaving the safety of your home, even if it’s on a leash.

Symptoms Of Rabies In Cats

Each feline furball is unique on its own. Having that in mind the symptoms might not show up even several months after your kitty has been into contact with the virus. However, it’s also possible that your fluffy friend could start experiencing symptoms only days after contracting the disease.

Unlike most viral diseases, which cause diarrhea or vomiting, the symptoms of the rabies virus are not specific for all cats. Some felines may only suffer from disorientation before becoming paralyzed. Others could start acting out in uncharacteristic behavior, such as going from extremely calm to fiercely aggressive for unexplainable reasons.

The most common symptoms of rabies in cats include:

Because the infection spreads differently in every cat, some kitties won’t experience most of the afore-mentioned symptoms at all.

What’s more, there are two types of stages of the rabies infection – initial stage and post-symptoms stage. There are also two types of symptoms – furious and paralytic.

The Two Types Of Rabies Symptoms

Once the virus has spread across the cat’s central nervous system, the animal will enter either a furious stage or a paralytic stage (a.k.a. “dumb rabies”).

The furious stage often results in erratic behavioral changes. Even the calmest, laziest and most amicable cat can turn into an extremely aggressive animal ready to viciously attack anyone or anything in its way.

Excitability, irritability and constant changes in the cat’s attitude and behavior are common for the furious stage.

The paralytic symptoms are milder in terms of behavioral changes, but they are still an alarming indicator with a lethal outcome.

During the paralytic stage, cats may become partially or fully paralyzed. Loss of coordination, loss of appetite, lethargy, shyness, excessive drooling and muscle weakness are all typical for this stage.

Some cats go through both types of rabies symptoms. However, some infected felines won’t show any severe symptoms at all before it’s too late.

As soon as you spot the slightest sign of any rabies symptoms in your cat, you should take immediate action. When the symptoms start occurring it means the virus has already spread across your pet’s body. The kitty’s chances of surviving the disease are slim if the post-symptoms stage has kicked in.

What To Do If Your Cat Has Rabies?

Now that you know what rabies is and how dangerous it is for you, your cat and the rest of the people residing in your household, it’s time to talk about what you can do if you’re suspecting your fluffy pal has contracted the virus.

The important thing to remember is that rabies is a preventative disease.

There are treatment options available before and after exposure to the rabies virus. Rabies vaccinations are available in every single country. They can be administered to your cat even if it has never been in contact with a rabid animal. Moreover, there are also rabies booster vaccines, which can be administered shortly after your cat has been bitten or scratched.

If you’re trying to save money from vet trips by not getting your cat a preventative shot before contracting the disease, you’ll be increasing your expenses. Furthermore, once the symptoms start occurring, chances are it will be too late to save an unvaccinated cat.

Treatment: What To Do After A Bite Or A Scratch From A Rabid Animal?

As soon as you spot the bitten or scratched area, take the cat to the vet’s office. If your pet is up to date with its shots, provide proof. If the cat has attacked somebody, that person must get a vaccine.

Washing the wounded spot with warm soapy water can prevent typical bacterial infections, but it won’t prevent the rabies virus from spreading. Moreover, due to the pain from the wound, your cat may not allow you to touch it.

Once the vet has administered the vaccine, the bitten or scratched cat should be kept in quarantine. This means residing strictly indoors and staying away from all human or animal contact.

The quarantine period usually lasts around 45 days, during which you must carefully monitor your pet for any symptoms of the virus.

In some countries, rabid animals must be euthanized immediately – even if they’re domestic. The pet parent must have proof that the cat is up to date with its shots.

How To Prevent Rabies In Cats And Kittens?

The easiest way to prevent rabies is to keep your feline friend strictly indoors, thus limiting its contact with other animals. A bite or a scratch takes mere seconds. And your furball can contract the virus from all sorts of stray animals.

Vaccinating your pet before a bite ensures its safety, as well as the safety of everyone in your home. Use a reputable vet’s services and make sure you’re getting a licensed rabies vaccine. In many countries these vaccines are mandatory, so not getting them means the authorities might euthanize your pet.

There’s no ultimate test that could diagnose rabies in cats. As such, if you’ve adopted a kitty from a shelter or off the street, you should immediately vaccinate it.

Last but not least, if you’re residing with a cat and a pet dog, treat the canine with the same safety measures as you would treat the cat.

Limit the dog’s access to unsupervised outdoor adventures and monitor it closely for any wounds or unnatural behavioral changes. If your puppy has contracted the rabies virus, it can easily transmit it to you or your cat.