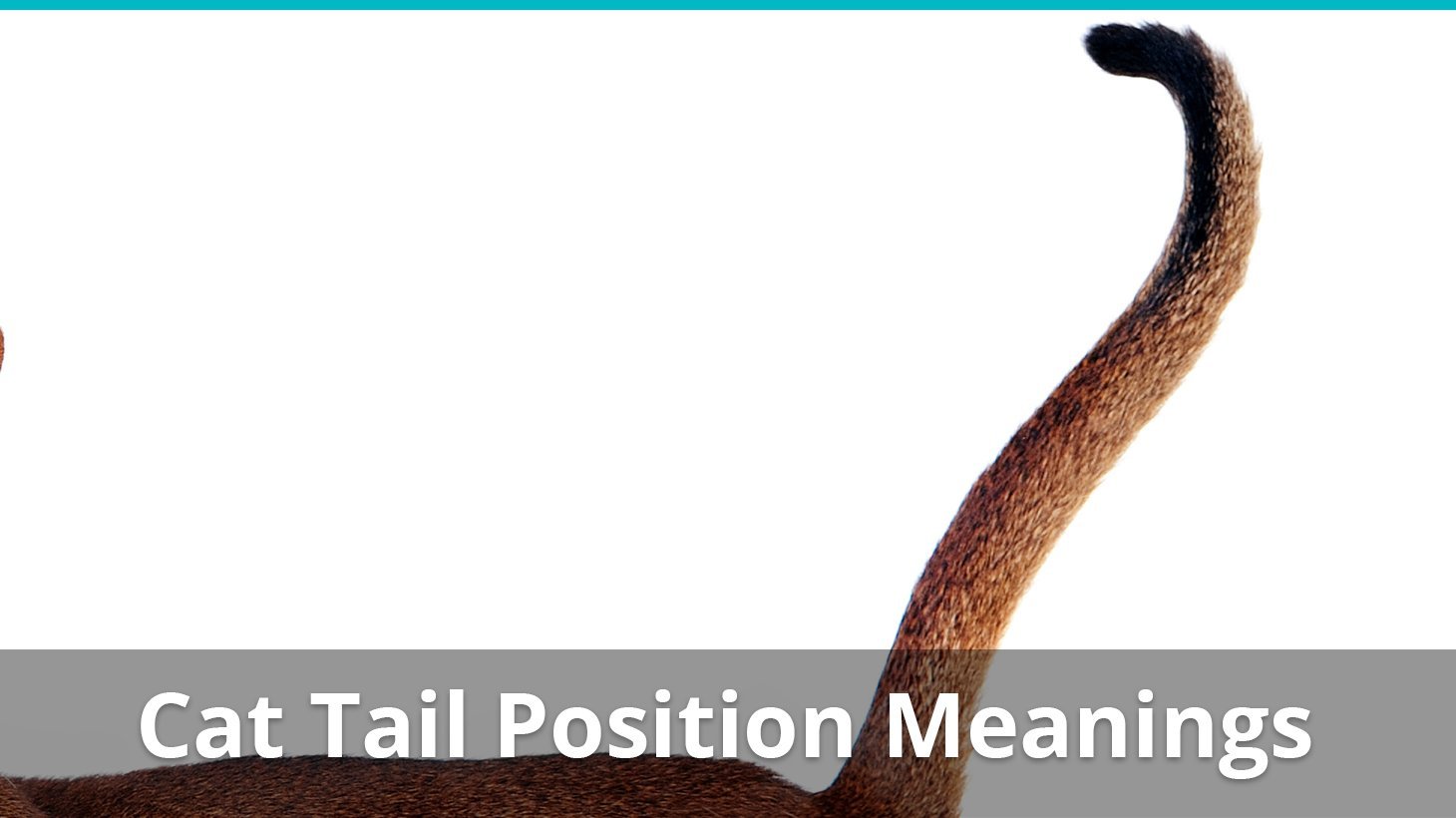 Cats are often misunderstood by their pet parents. As fascinating as feline creatures are, they still can’t talk and tell us what they want or need. And while they have evolved enviably heightened senses like sight and hearing, they still can’t speak our language.

We often misinterpret our kitty’s behaviors due to the lack of a mutual language. And while some breeds, such as the Oriental Shorthair, are quite vocal, the excessive meowing and chirping sounds don’t really give us a good insight into what the cat wants.

Fortunately, there are ways to understand your kitty through monitoring its body language.

A cat’s tail position and movement speak eloquently. While dogs, for example, tend to simply wag their tails, cats have a unique way of communicating through a vast variety of tail movements.

Your kitty’s tail indicates different things depending on the angle it’s lifted at and the way it’s curved. The tail position can show contentedness without purring and fear or aggression without hissing. In other words, the tail alone can give you a pretty good idea of what your cat is feeling and how it perceives its current surroundings.

Understanding your cat’s behavior is important. So, without further ado, let’s talk about cat tail language and the diverse meaning behind the various cat tail positions.

Cat Tail Positions: What Do They Mean?

High, Up In The Air

This particular tail position can vary depending on the way your cat is stretching its tail up high, quivering it up high, or even raising it up at a 90-degree angle. If your feline pal is holding its tail up high in a vertical position it translates as contentedness and amicability. This occurs when the cat is feeling safe, confident, and happy.

A mom will often raise her tail upright when greeting kittens or urging them to follow her. The quivering of a raised tail also indicates that the cat is pleased to see its owner, kittens, or other pets residing in its home.

If your furball’s tail is raised straight up at a 90-degree angle, it indicates that your pet is feeling uncertain, but not threatened. This is a typical tail position for greeting newcomers into your home.

Hooked Or Curved At The Top

A hook or curve at the top of the tail indicates uncertainty and a bit of insecurity. In this position, your fluffy pet’s tail resembles the curve of a question mark. And that’s exactly how your feline is feeling – unsure and cautious.

Fortunately, if the tail is still raised up high while hooked or curved, it means the cat feels friendly. However, it is still guarded, even though it’s expecting a positive outcome from its surroundings.

Furthermore, the hooked tail can indicate the need to engage in a play session. When you spot the curved question mark, try taking a break from your current tasks to play with the cat.

Every kitty out there needs some playtime. If you can’t devote a sufficient amount of time attending to your pet’s needs, stock up on lots of interactive cat toys. You can make them even more appealing for the kitty with a few sprites of catnip spray.

Beware of the low-positioned tail! Fear and aggression are the two most common reasons behind the low tail, especially straight down. Scratches, bites, and similar attacks may occur soon if you don’t give the cat some space to calm down.

Of course, a sudden noise or an unfamiliar scent may also trigger aggression, so this particular tail position doesn’t have to mean that your cat is irritated with you or its surroundings.

Moreover, some feline breeds like the Persian do tend to keep their tails positioned like this most of the time. Thus, if you own a Persian kitty the tail position doesn’t necessarily indicate aggression. Nevertheless, it’s better to be safe than sorry and give your furball some space.

Tucked In Between The Legs

This particular tail position is an unmistakable indicator that the cat is feeling nervous and submissive. It can show that the kitty is guilty, afraid, or simply stressed out.

When the tail is tucked in between the legs, the feline is severely upset and perceives itself as the submissive creature in a potentially threatening situation. Your cat may be scared of you, another animal, or even an inanimate object.

In such cases, it’s better to leave the kitty alone and provide it with a clear escape route. Allow it to calm down and make sure it feels safe and relaxed in its surroundings before approaching it again.

Puffed Up And Bristled

When the cat’s tail is puffed up and bristled like a brush, just leave the room. Even young children are aware of the fact that they should stay away from cats with bristled tails.

The puffed-up tail means your cat is scared and is acting out aggressively. By bristling its tail and the fur on its back the feline is trying to appear larger to ward off the potential threat. Your cat may see you, another animal, or even an unfamiliar inanimate object as the threat.

If you try to calm your cat or to approach it in any way when its tail is in this position, it will most definitely attack you.

Whipping Back And Forth

The whipping tail is a telltale sign of negative and stressful emotions for the cat. When your feline furball is whipping its tail back and forth or up and down, the uneasy movements indicate that there’s something that is bothering your pet.

Overly territorial cats, which spend a great deal of time on the window perch, are constantly whipping their tails. They are feeling uncomfortable when they spot something unfamiliar in the yard and are ready to protect their territory. Such tail movements should give you a clear warning – stay away from the cat until it feels safe and relaxed.

Unlike dogs, cats don’t really wag their tails, but rather swish them from side to side. When the cat is slowly swishing its tail sideways, it’s usually focused on an object or another animal. It’s common for cats to do this right before they jump towards their toys or run off towards the food bowls. The swishing means strong concentration and simply shows that your kitty is expressing a particular interest in something.

This type of swishing also occurs when your kitty is stalking prey and possibly getting to pounce. Moreover, it could also indicate excitement or an invitation for another furball to join a play session.

Whether it’s on prey or on another animal that is invading the territory, the cat’s tail will twitch when the kitty focuses its attention on something.

The twitching tip also means your pet is highly alert. Depending on the situation, the cat may be feeling playful, ready to hunt, or even slightly aggressive. Either way, your feline pal is not relaxed.

This is the cutest tail position of all time. When your fluffy pal has wrapped its tail around something – a human being, another pet, or even an inanimate object – it may seem as though the cat is hugging it. And that’s exactly what it’s doing!

When a kitty entwines its tail around something, it’s expressing its affection towards something or somebody. Some cats will even do this as a way to plead for food, attention, or play sessions.

Sometimes your cat may twitch, swish, or whip its tail not because of the way it perceives its surroundings, but due to health reasons. If your kitty is suffering from an undiagnosed health issue, it may try to signal the disorder through the movement of its tail or the position in which it’s being held up, down, or sideways.

Make sure your pet’s health comes as your priority. Feed it only with high-quality cat food items and if needed, get vitamin supplements, but don’t ever use them as substitutes to actual food.

Don’t ever neglect your kitty’s needs and don’t skip any vet appointments. If you suspect that something’s wrong with your pet, schedule a new check-up with the vet as soon as possible. Devote your time, care, and affection to your fluffy pal and you won’t regret it. Your cat will cherish you for all of your efforts.

2 thoughts on “Cat Tail Position Meanings: What Does It Mean When It’s Tucked, Twitching, Up, Down, Or Between The Legs”