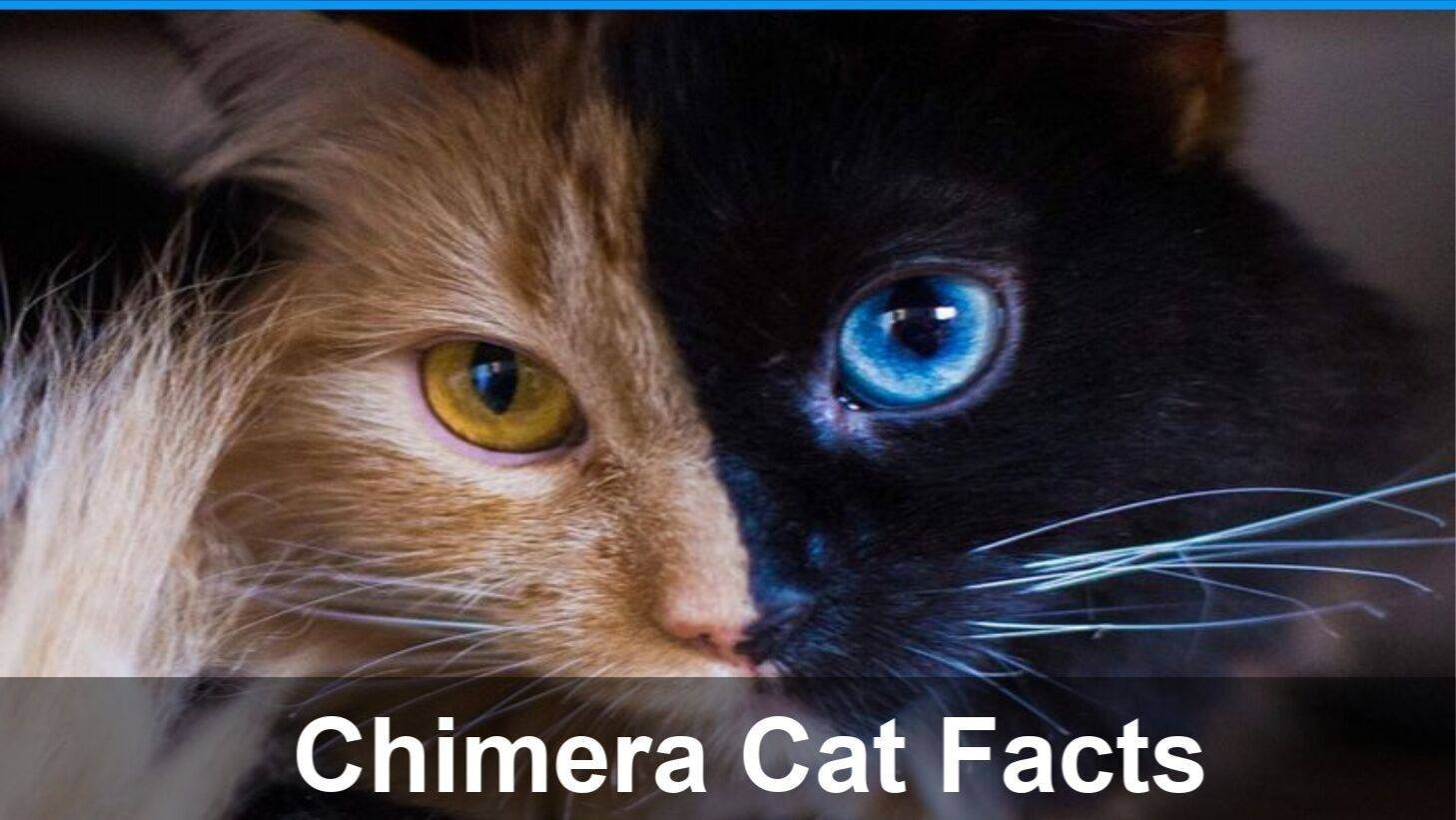 Have you ever heard of a “split-faced” cat, or a “two-faced cat”?

If you’re a frequent Facebook or Instagram user, chances are you have. These are names often used to describe a chimera, and there are some pretty famous ones out there. If you haven’t heard of these chimera cats yet, read on to meet them!

What is a Chimera Cat?

The simplest explanation is that a chimera cat is one that has one color scheme on half of its face and/or body and another on the other half. The line that separates them is sometimes uncannily straight, making the face look like Mother Nature was having a little joke—trying to blend two cats into one.

Which is actually not far from the truth.

If you’re familiar with the chimera of Greek mythology, you would be forgiven for thinking the chimera is a magical cat. The chimera from Homer’s Iliad was a fire-breathing monster that had the head of a lion, the body of a goat, and the tale of a serpent.

But the feline chimera is a much more down-to-earth creature with a logical scientific explanation.

What Causes the Chimera Phenomenon?

A chimera cat is one cat that started out as two. Chimera cats have two sets of DNA because a pair of embryos fused together early in the mother’s womb. So, chimera kittens are born with their own individual DNA, plus the DNA from a second embryo. (Some like to say that a chimera is its own identical twin.)

The newborn kittens can be born with coloration differences so slight that it’s not really noticeable or with differences that can’t be seen. Occasionally, though, one will show a difference that’s so dramatic that it’s startling.

Why Do Some Chimera Cats Have Different-Colored Eyes?

Chimeras will often have eyes that don’t match. This can be the most noticeable feature of some chimeras. It’s a phenomenon called heterochromia.

Most cats with “odd eyes,” as it’s often called, are not chimeras, But it is more likely to happen with chimeras because of the two sets of DNA these cats have. They get one color from their own DNA and another from the second set.

Are Calicos and Tortoiseshells Chimera Cats?

Calicos and tortoiseshell cats often look like chimeras, but most are not. Most of these cats are females, but once in a great while a male will be born. Chances are good that that male will be a chimera.

This happens because of the XX sex chromosomes that females carry and the XY of the males. The mother and the father each pass one chromosome on to the offspring.

The gene for calico and tortoiseshell coats is only carried on the X chromosome, so dad’s Y can’t produce a calico or tortie. Therefore, nearly all cats with these color patterns are female (X from mom and X from dad equals XX, or female).

Once in a while, an embryo fusion will take place. If one of the fused embryos were female and one was male, that cat could be male. That male is more than likely to be a chimera (but again, not always).

Unfortunately, male torties and calicos will remain rare because most of them are sterile.

How Do I Know if My Cat’s a Chimera?

The differences caused by chimerism can be subtle, so your cat could be a chimera even if it’s not obvious. On the other hand, a calico or tortoiseshell’s natural coat pattern may look like a chimera’s when it’s not. The only way to know for sure is to have your cat DNA tested.

Will A Chimera Cat Have Chimera Kittens?

Chimerism can be hereditary, according to Healthline. Depending on which parts of the mother’s body the second set of DNA affects, it is possible for a mother to pass two sets of DNA to the kittens, resulting in a chimera.

But this is impossible to predict. Even if you DNA tested the mother, there is no way to know which traits she will pass on to her kittens or which they will inherit from their father.

Because chimerism is not a breed but a genetic phenomenon that can happen to any cat, there is no one personality type and no standard traits. Chimeras will have all of the natural variety of the feline species.

If you already know about chimeras, chances are you’re familiar with one of the famous chimera cats that have become popular through Instagram and other online sites.

We do need to point out, though, that without DNA tests, it’s impossible to tell if these cats truly are chimeras. According to geneticist Dr. Virginia Papaioannou in an interview with The New Republic, they could just have coincidental color patterns.

Either way, we think they’re adorable!

Venus may be the first well-known chimera cat. She has a striking two-colored face with orange on the left and black on the right.

She also has heterochromia with one blue eye and one green.

Venus has a large following on Instagram and her Facebook page. She also has her own merchandise, including a stuffed animal version of herself and a calendar. She even made an appearance on ABC’s Good Morning America.

Narnia is a gorgeous British Shorthair bred and owned by Stéphanie Jimenez of the Grace Cattery in France. His body is black, but half of his face is blue (cat talk for a color that’s more like slate gray), and the other half is black. Both of his eyes are blue.

Quimera is, interestingly, almost the mirror image of Venus. Her face has black on the left and orange on the right. She also has one green eye and one blue. See Quimera on Instagram, or check out this story about her at People.com.

Yana is another tortoiseshell cat with features of a chimera. She is owned by a woman named Elizabeth from Belarus, who found her through a classified ad when she was just a kitten. Yana also has the split facial coloring, but unlike Venus and Quimera, her eyes are both green. You can visit with Yana as a kitten on her Instagram page.

How Common Are Chimera Cats?

Chimeras with the dramatic facial features we see in Venus and Narnia are very rare. But chimerism may be much more common than we’d think. A cat could have more than one set of DNA, but sometimes the parts of the body that are affected aren’t visible.

For example, some chimeras are born with two blood types mixed in their veins. Others are born with both male and female reproductive organs but might appear female from the exterior with their male organs tucked inside.

In cases like that, only DNA testing (or surgery) would prove if the animal were a chimera.

Because we often hear the chimera called a “two-faced cat,” it’s easy to confuse them with another cat that shares that nickname. Obviously, chimeras have only one face. But occasionally a cat will be born with two actual faces.

These are the real two-faced cats, and they’re called Janus cats. They’re named for the Roman god Janus, who was said to have two faces so he could see back into the past and forward into the future.

Janus cats are extremely rare and very few live beyond a few days. But some beat the odds. This CNN video features two Janus cats. One is a just-born kitten, and the other is the longest surviving Janus cat, named Frank and Louie.

Frank and Louie (whom the media cruelly nicknamed Frankenlouie) made it into the Guinness Book of World Records when he was 12 for the longest-surviving Janus cat. He was 14 years old at the time of this video.

Where Can I Find a Chimera Kitten for Sale?

The short answer is that you probably can’t. Again, because chimeras aren’t a breed but only a genetic variation, you can’t just shop for one.

Unfortunately, there is no such thing as a chimera cat breeder.  You can visit shelters and rescues and watch classified ads, and one day you might get lucky. (After all, Elizabeth found Yana through a classified ad!)

But finding a true chimera cat (or even a cat that looks like one) is probably less likely than finding a four-leaf clover in your backyard.

If you did get lucky and find one, it would be impossible to predict a chimera cat price.  Because of their rarity, even if you were to find someone willing to part with one, if they knew the value of what they had, the price would probably be high.

Can Humans Be Chimeras?

Yes! But you probably wouldn’t know it in most cases. There are a few famous examples of human chimeras who only found out because of DNA testing done for other reasons. To learn more about them, check out this article at Scientific American.

Not only can it happen with cats and humans, but chimerism occurs with other animals as well. For some interesting possibilities, check out this story on Weird Nature.  While we can’t guarantee that these are all legitimate chimeras, it’s scientifically possible.

Dr. Leslie Lyons, a professor at the University of California Davis, in an interview with National Geographic about Venus, explains that her unique coloration can be explained by the natural course of genetics, that she may not be a chimera. She also says that her theory doesn’t explain Venus’s one blue eye, however. She concludes, “She is a bit of a mystery.”