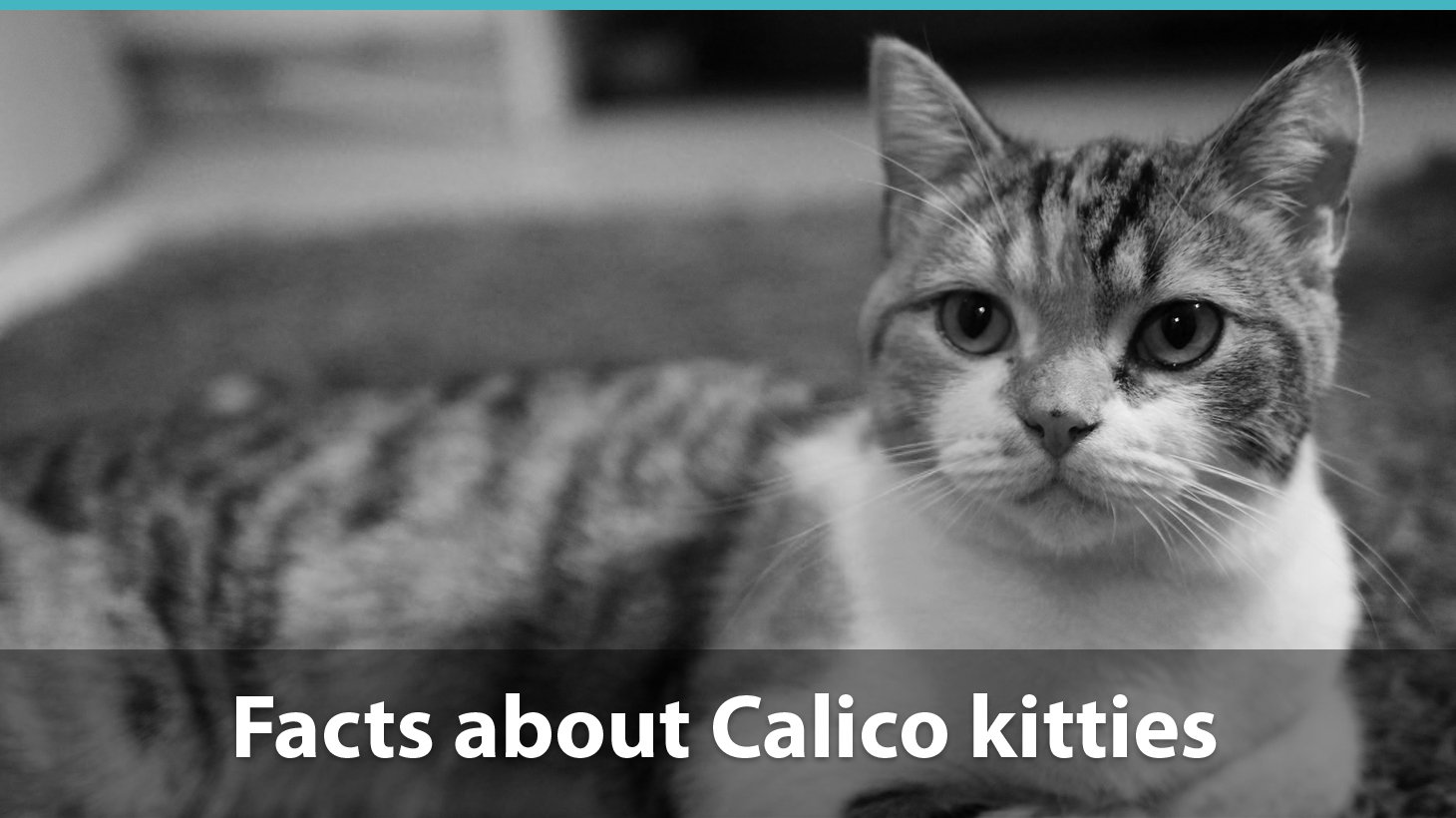 Calico cats are fascinating creatures for many reasons. For starters, owning one of these tri-color kitties is just like owning three different cats merged into one. Their cuteness factor is undeniable.

What’s more, they’re quite famous and highly valued in different parts of the world, especially in Japan and the UK. Why in the UK and Japan?

Because according to local folklore, they have a bunch of supernatural powers that benefit their owners in various ways. Moreover, these lovely kitties come in different shapes, personalities and eye colors.

Nobody knows the true origins of the Calico cat. The term Calico comes from a type of woven cotton textile and it became popular as a name given to a particular type of Tortoiseshell cats that have white patches on their fur.

One of the many things that make Calico cats so curious is the fact that their distinctive patterns occur completely incidentally. This means that they can’t be bred and developed for their signature appearances like a standard feline breed.

Today I want to share some other interesting facts about Calico cats with you – and some of them might even shock you.

Here are 12 surprising facts about Calico kitties that will make you fall in love with these adorable fluffy creatures.

They are non-breed specific

Let’s start with the first and most important fact about Calicos – these kitties are non-breed specific. Or in other words, they don’t belong to a single feline breed.

The term Calico doesn’t specify the breed at all. It’s just a type of fur pattern.

Many people think that Calicos and Torties are the same thing, but they aren’t.

Tortoiseshell is a type of pattern that just combines multiple colors. Calico is a specific type of tri-color pattern that includes white patches.

The Calico combination usually consists of white, black, and ginger or white, brown, and ginger. Tortoiseshell cats, on the other hand, can have a vast variety of coat colors, including chocolate, lilac, blue, black, red, ginger, cream and so forth.

Most Calico cats are female

Another interesting Calico fact is that most of these kitties are female cats. The key to this strange phenomenon lies in their genetic heritage, regardless of the breed.

It comes down to the sex chromosomes. Specifically the X and Y chromosomes and how they distinguish males from females.

Male cats have an X and a Y (or XY) chromosome combination and female cats have 2 X’s (or XX). Two X chromosomes are required for the Calico pattern.

So if you’ve seen a Calico, chances are it was a girl.

Male Calico cats do exist across the globe, even though they are notably rare to come by.

The occurrence of a male Calico happens when a male kitten winds up with two X chromosomes along with the Y ( an XXY pattern). This is called Klinefelter syndrome. It can happen when the cat is a Chimera (two different embryos merge in the mother’s womb), or even more infrequently when kitten skin cells spontaneously mutate.

If you’re lucky enough to come across a male Calico cat, chances are you won’t be able to reproduce it. These rare creatures are almost always sterile.

In addition, the genetic abnormality sometimes leads to other health problems, including diabetes, brain damage, and organ failure. Yet there are plenty of male Calico’s also live perfectly healthy lives if properly cared for.

Because of the rarity and potential issues, healthy male Calicos may have a slightly more expensive price tag than female Calicos.

They’ve been around for a long, long time

Some people believe Calico cats were popular pets even among the Ancient Egyptians. However, nobody has proven this theory, so we don’t know if they really come from Egypt.

Whether the theory is true or not, it’s a fact that Calicos have been around for a very long time. These kitties can be spotted in various Japanese paintings dating back to the 1800s.

A Calico cat served as a Station Master

One tri-color kitty made history when it was appointed a real human-like occupation back in 2007. The cat in question (a white-patched Tortie named Tama) became the Station Master of a railway station located in Kinowawa, Japan.

Becoming one of the most famous feline furballs in the country, Tama kept serving as a Station Master up until she passed away in 2015. The Telegraph has an insightful article on the subject if you want to find out more info about Tama.

The Maneki-Neko Japanese figures are based on Calico cats

If you’re wondering why I’ve mentioned Japan several times already, it’s only because Calicos are quite famous among the Japanese people for many reasons. One of them is the Maneki-Neko figure, which has gained worldwide popularity over the years.

These Japanese figures are all based on Calico cats (even the gold ones) and more specifically, on Calico Japanese Bobtail cats. People believe they bring good fortune and prosperity to their owners. That’s why you can often see them near the entrances of homes, restaurants, shops, parlors and other similar public places.

The Calico is the official state cat of Maryland

Back in October 2011, the Maryland government picked a Calico cat as its new state symbol to match the orange, black and white colors of its other symbols – the state insect (the Baltimore Checkerspot butterfly) and the state bird (the Baltimore oriole.)

As an aside, outside of Maryland and Maine, Massachusetts is the only othe state with a state cat. Theirs is the tabby.

Calicos are also popular in folklore

And here’s yet another reason why Calicos are so awesome – they’re quite popular in folklore and they are the subject of many legends.

They have diverse personalities

Some Calico and Tortie cat owners claim that their colorful furballs have notably sweet personalities.

Others swear that their cats have the infamous “tortitude” towards everything in life.

Either way, Calicos have diverse personalities because they come from different breeds. So, if you’re thinking of buying or rescuing one such kitty, you’re definitely in for a treat!

They have awesome eyes

Another one of the many things that make Calicos so fascinating is the fact that they have stunning eyes.

Since they come from different breeds, Calicos can have blue, almond, green, black, hazel and basically any type of eye color. On top of that, depending on their breed’s characteristics, their eyes can also come in a variety of shapes.

And their lifespan varies

The great thing about getting a Calico kitty for a pet is that you can choose not only the signature tri-colored looks, but also the lifespan expectancy.

Some Calicos live up to 18-20 years (American Shorthairs), whereas others have a shorter lifespan of 12-15 years (Persians).

Depending on the breed of your Calico you can find yourself in the company of a life-long fluffy friend.

How Much Do Calico Cats And Kittens Cost? Price Analysis And Buying Guide

You’ve probably seen Calico cats among feral kitties at least once. But how much do these cute furballs cost if you want to get them from a cat breeder? Here’s a quick price analysis for Calicos:

If you want to buy a Calico kitten, make sure you’ve researched the breed you want, not just the patterns and the pedigree.

You can find it among many breeds and you don’t have to spend a small fortune on the kitten, unless you want a pedigreed pet for shows.

How To Care For A Calico Kitten

If you’ve recently adopted a new kitten and it happens to be a Calico cat, here are some helpful tips and tricks that will guide you on your journey.

Find out the correct breed

It’s of extreme importance to find out the real breed of your Calico kitty.

Knowing the breed helps you focus on the suitable cat food as each breed has specific dietary requirements.

Plus, it’s one of the easiest ways to know what to expect in terms of personality, growth, lifespan, health concerns, etc.

How can you pinpoint the exact breed? Don’t rely on the seller’s words alone! Instead, opt for the services of a reputable vet.

If your fluffy friend is a mix, you need to keep its parents’ breeds in mind and ask the vet to perform a health check-up to make sure everything’s in order with the kitten.

Even though each feline furball is unique on its own, the breed plays a significant role for the temperament, nutritional requirements and lifespan.

Keep an eye out for health concerns

Once you’ve found out your Calico’s breed, you need to keep an eye out for the breed-specific health concerns. Some breeds are overall healthy, whereas others tend to be more prone to developing diseases.

Don’t be afraid to ask the sellers about the kitten’s genetic heritage and its parents’ health history. It’s possible that they won’t admit it if there’s a chance for genetically inherited diseases, but that doesn’t mean you shouldn’t ask.

If there are any warning signs that there’s something wrong with your kitten, alert the vet immediately. Catching an undiagnosed problem on time can help your vet prescribe a treatment that could save your new pet’s life.

Pay close attention to the fur

Calicos are notorious show-stoppers wherever they go due to their colorful and unique fur patterns. Unfortunately, their uniqueness is a double-edged sword.

The different colors make it harder to spot skin problems at once, as well as other nasty things like fleas and ticks.

Pay close attention to your Calico kitty’s fur and don’t skip the essential everyday grooming procedures. Maintaining its fur and skin in top condition is crucial for its well-being.

Bathing your kitty is also a necessity. Depending on how predominant the white patches are, you might want to use cat shampoos manufactured for light fur coats.

And my final tip for taking care of a new Calico kitten – don’t forget to give it the love and attention it needs (and deserves) every single day.

Even though cats can’t speak, they know how to show us just how grateful they are for all of our efforts and devotion in their own unique and purr-fect ways.