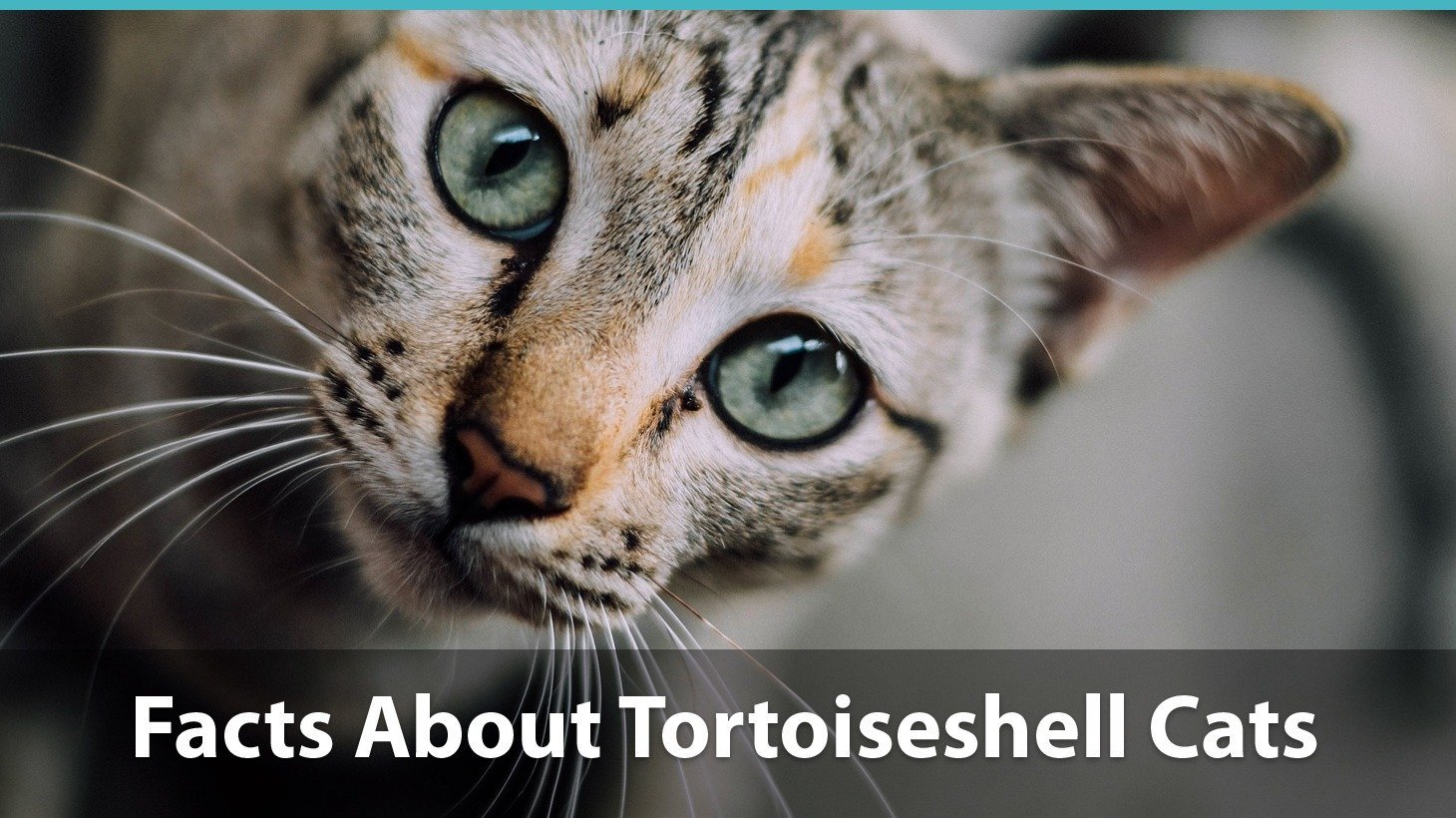 Cats are fascinating and often misunderstood creatures. Nevertheless, they are among the top popular choices for pets all over the world. Owners value them for their personality traits, whether they’re devoted and amiable or aloof and independent, as well as for their gorgeous looks.

And while nobody can deny that a solid white or mitten-patterned kitty is absolutely stunning, the beauty of colorful kitties shouldn’t be overlooked.

It’s no wonder that the most colorful breed, the Oriental Shorthair, is among the most popular feline breed across the globe. This article, however, isn’t about Orientals. It’s about Tortoiseshell cats, which are also known as Tortie cats or simply Torties. You’ve probably heard about them. And you’ve most definitely seen them, even if you didn’t know what they were called.

This article will cover everything you need to know about Torties. That includes general info, as well as some little-known facts, which might truly surprise you.

And if you stick with me to the end, you’ll also find a crucial guide to taking care of a Tortoiseshell cat.

Are you ready to learn more about Torties, and what makes them unique? Let’s go!

They have many names

Torties are named after the colorful tortoise shell material. However, they are known by many names in different countries. For example, tabby-patterned Torties are called Torbies. The term Calico refers to Torties with white markings in the US and Canada. And sometimes they’re also called simply tricolor cats. But as long as you use the universal term Tortie, you can never go wrong.

Most Torties are actually female

The tortoiseshell genes are predominant almost always in female cats. Why? Because females inherit more X chromosomes than males. As such, they have a greater chance to inherit the “O” colorful gene in the X chromosomes, which gives Torties their distinctive colors. Nevertheless, that doesn’t mean that male Tortoiseshell cats don’t exist. It just means they are notably rare to come across.

The male ones are mostly sterile

Even if you’ve managed to adopt or buy a male Tortie cat, don’t get your hopes up in terms of reproduction. Most male Tortoiseshell cats are sterile. Chances are he won’t be able to fill your home with cute baby Tortie kittens.

Regardless of the Torties’ gender, these kitties can come in some pretty crazy colors. Whether they’re tabby, heavily patched, or lightly spotted, they can have a plethora of color combinations. Cream, white, blue, chocolate, ginger, fawn, lilac, black, red… the list goes on and on! The asymmetrical markings of the tortoiseshell patterns can also be diluted. In other words, Torties vary in terms of their physical appearances. And that’s yet another reason as to why they’re so fascinating and beautiful.

While we’re on the subject of reasons that make Tortoiseshell cats awesome, here’s another one – they are “lucky cats.” According to Japanese, Irish, and Scottish folklore, these feline furballs have supposed supernatural powers.

In the US, it’s believed they bring money and prosperity. Celtic folklore claims they bring luck to their owners. Japanese fishermen thought taking a Tortie cat on board would protect them from ghosts at sea. And in some parts of the UK, people once thought that rubbing a Tortoiseshell cat’s tail on their skin would remove skin warts. Obviously, these cats were treated as something more superior than a mere domestic pet.

A Tortie cat served as a Station Master

Yes, a Tortoiseshell cat had a real human-like occupation. And it wasn’t in ancient times either! Back in 2007, a Tortie cat named Tama became a Station Master at the railway station in Kinokawa, Japan. She served up until her passing in 2015 and was often regarded as the most famous cat in Japan. Want to read more on the subject? Check out this article on The Telegraph’s website.

The Tortie cat is the official cat of Maryland 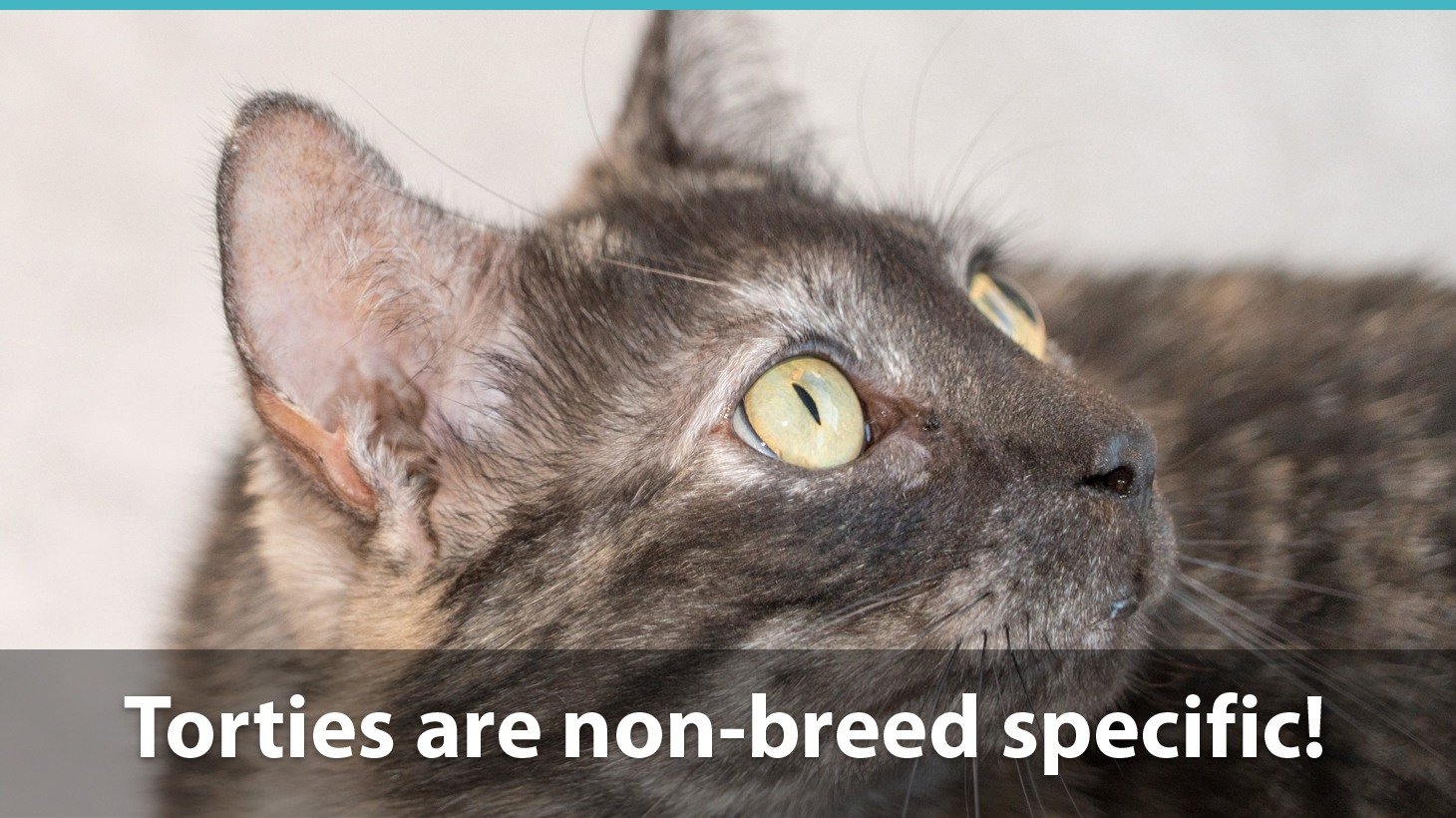 You might not know this, but Torties aren’t an actual feline breed. They are just a type of color. Many breeds can have Tortoiseshell kitties. As such, Torties can also have short or long hair, long and slender or short and chunky bodies, primary white colors, or nearly solid-colored fur coats.

Torties are often spotted in the Cornish Rex group and are a preferred type of pattern in the Japanese Bobtail breed. However, you can even find them among Birmans, as well as among many other breeds.

Something that’s even more varied than the Tortie’s colors and patterns is its personality. Since Torties are non-breed specific, they have different traits and temperaments. So, you can really expect any kind of extremity when it comes to the Tortoiseshell cat’s personality.

And yet there’s something called “tortitude”

Many owners of Torties have expressed their concerns over what has grown to be famous as “tortitude,” the attitude of Tortoiseshell cats.

These furballs are known for challenging their pet parents to the point of annoyance, baffling curiosity, or even frustration. Whether they are demanding, destructive, clingy, or just too energetic, many cat owners and cat lovers claim that Torties have a stronger attitude in comparison to most other cats. However, since Tortie cats aren’t a breed, their attitude can’t and shouldn’t be contributed exclusively to the colors of their fur coats. The breed plays the key role in the temperament – not the color.

One of the most famous Tortoiseshell cats in history – Marzipan – lived in Melbourne, Australia, and enjoyed a surprisingly long lifespan of 21 years. Due to the fact that Torties can be found in many different breeds, these furballs have a varied lifespan. While some of them might be short-lived (8-10 years), others can offer their pet parents a lengthy lifetime filled with great moments.

Extensive researches have shown that purebred Torties can live up to 14 years. On the other hand, crossbred Torties or cats of mixed breeds showed tendencies towards outliving their purebred counterparts. In other words, you don’t need to spend a small fortune just so you can buy a lifelong Tortie companion.

Now that you know how diverse these creatures can be in terms of lifespan, physical appearances, and personality traits, it’s time to focus on another essential aspect – health concerns.

The Tortoiseshell fur color is not connected to the cat’s overall health.

This doesn’t mean that the coat isn’t linked to skin and fur coat problems. It simply means that there are no universal health concerns, which can be applied to most Torties. It all depends on the breed and on the kitty’s upbringing.

What does this mean? If your Tortie kitty’s breed is known to be prone to specific conditions, you’ll need to be cautious about those health complications. And regardless of your pet’s breed or fur color, you should never neglect its needs, which brings us to the upcoming question. 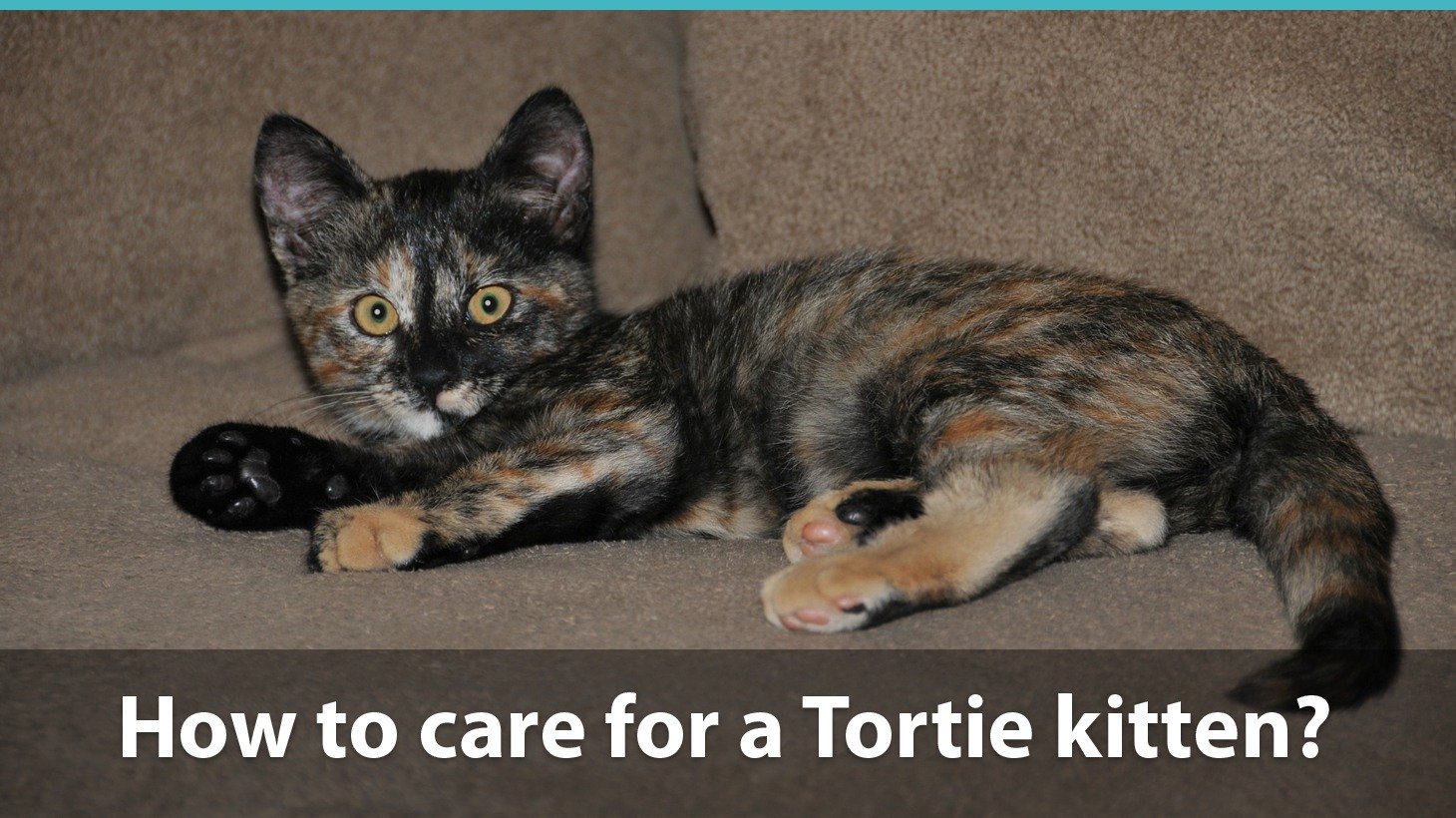 How To Care For A Tortie Kitten

As I promised you at the beginning of this article, I’ll cover some tips and tricks on taking care of a Tortoiseshell cat or kitten. Let’s start with the basics.

When getting a Tortoiseshell kitten, it’s of intrinsic importance to pinpoint its exact breed, and especially its parents’ breeds if the furball isn’t pure. You need to know the breed in order to keep an eye out for the breed-specific health concerns, as well as for the cat’s possible breed-specific personality traits. The easiest way to do this is to take the kitty to a reputable vet, regardless of what the previous owners have told you. The doctor will be able to give you proper information regarding the genetic inheritance of your new pet.

However, you should treat Torties just as you would treat any pure or pedigreed kitten when it comes to food. Many breeds have specific nutritional requirements. Depending on your Tortoiseshell cat’s breed, it will demand a special diet.

Your cat might have a problematic attitude towards something (or someone), but let’s face it – every cat is like that. In fact, unlike dogs, horses, and most other domestic animals, feline furballs are actually well-known for having a cat-titude. So, if your own fluffy pal happens to be a pain in your neck sometimes, just take a deep breath and love it the way it is. Trust me on this one – even the most difficult moments are still worth it!

Some cats are more demanding when it comes to grooming than others. Most longhaired breeds make controlling cat hair quite painful. And some kitties have an undercoat, which makes the fur more prone to matting (and to shedding too).

Torties can come in longhaired and shorthaired variations. Depending on the breed, you’ll need to get proper grooming tools and pay close attention to your furball’s skin and fur coat condition. Don’t skip the de-shedding procedures and the obligatory brushing if you want your pet to have silky, healthy, and smooth fur.

And don’t neglect the bathing!

Yes, yes, I know that bathing your cat is a challenging task, and sometimes it seems like the mission impossible. However, cats do need a bath, and learning how to do it the proper way can spare you the headaches, along with some painful scratches and bite marks.

Did you know that cat shampoo manufacturers offer shampoos for dark and light fur? Depending on your kitty’s dominant color and fur density, you might want to choose a fur-specific version. That is, of course, if you want to keep your pet’s coat beautiful and healthy throughout its entire lifetime. I know I do!

Provide your kitty with all of the necessary essentials

Food and attention aren’t everything a new cat needs, regardless of how old it is and whether or not it’s a Tortoiseshell cat. And Torties deserve to be treated as equals to every cat out there.

If you’ve just welcomed a new Tortie kitten into your home, make sure it has all cat-related essentials. This means you’ll need to buy:

To determine more of what you need, ask yourself questions such as the following:

Think about the answers to these questions, and what that means for your cat.

If she is home a lot, she’ll need some way to entertain herself. If you travel, you’ll need to gear to support that. If you have multiple cats, you’ll need to make sure she has adequate space to feel safe, along with things that are hers and hers alone.

In addition, kitty furniture is absolutely crucial for every indoor cat. But depending on your lifestyle, you might need some additional accessories.

Don’t forget the most important things – love and devotion.

If you’re not sure you can devote your time and efforts to a Tortie’s upbringing, don’t get a pet cat right now. Countless kitties all over the world end up homeless or in overcrowded shelters because their owners can’t take proper care of them.

Show your pet the love and devotion in deserves, and it will cherish you for the rest of your lifetime. Cats have unique ways of showing us just how much they hold their pet parents dear. If you can prove to your fluffy companion that you truly care about it, you’ll have a lifelong trusty and affectionate furry pal that’s eagerly waiting for you to come back home.