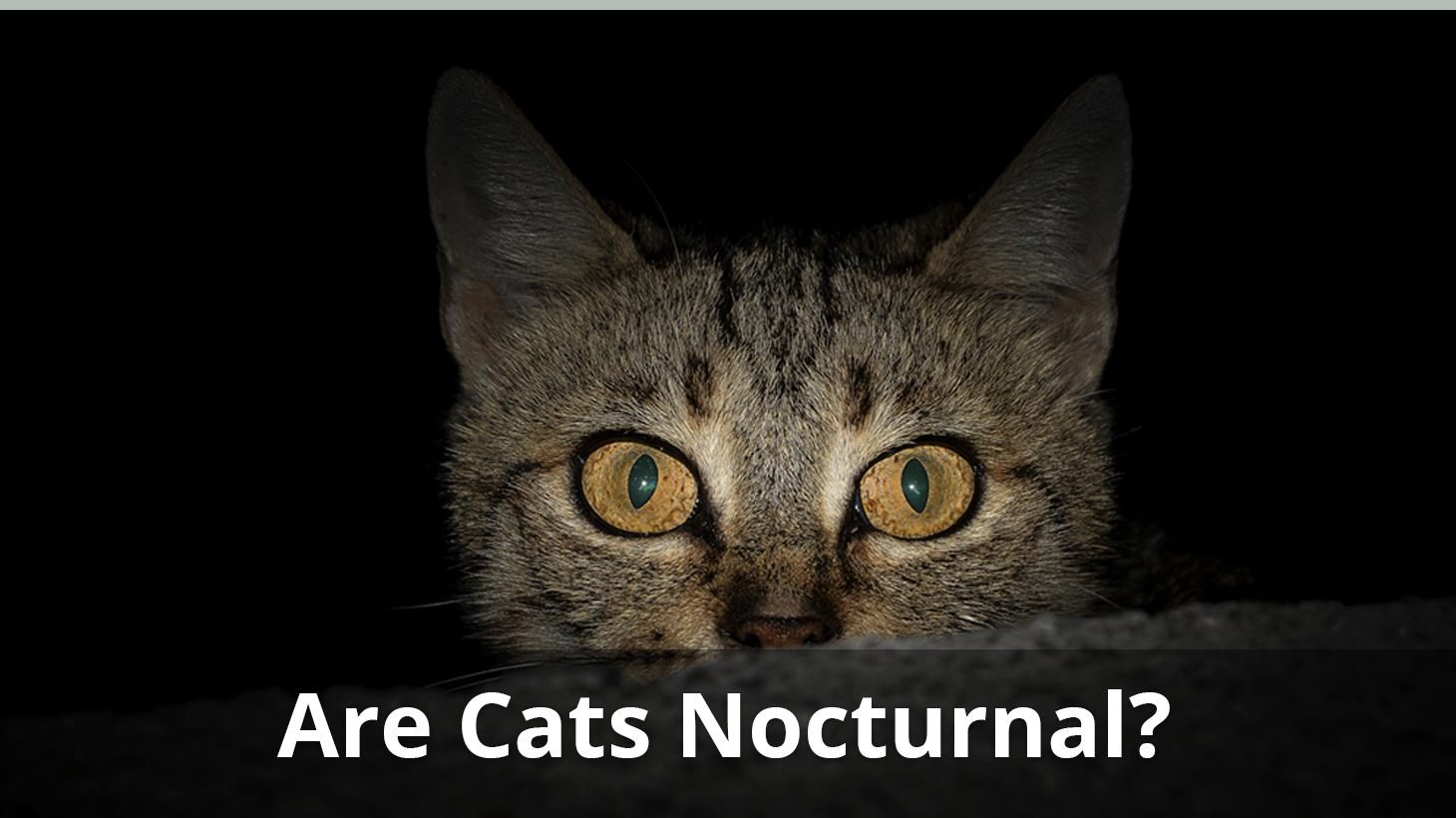 As anyone who has ever been owned by a cat can tell you, cats sleep a lot. After all, the word “catnap” was created especially for them.

Sometimes it seems cats sleep during the day to save up their energy  to play with you when you get home from work.

At other times, their natural sleep patterns appear to be a diabolical plot to keep you awake at night.

In any case, when a typical cat (is there such a thing?) comes alive in the evening, it’s only logical to believe that he must be nocturnal.

But are cats nocturnal?

We did some research to find out.

Cats are hard-wired to be more nocturnal (most active at night), than diurnal (most active in the daytime). But they are more accurately described as “crepuscular,” meaning their most active time occurs at dusk—or twilight—and dawn, just before the sun rises.

There is a good biological reason for this activity pattern. If we look at non-domesticated cats, we find that a crepuscular pattern is beneficial to their survival.

Big cats such as the lion are at the apex of their kingdoms – meaning few if any predators.

Smaller cats are both prey and predator.

For those in the wild, crepuscular behavior is a survival necessity.

Large birds such as owls, hawks, and eagles are small cat predators. During the crepuscular periods of the day, birds have poorer vision than at other times.

Cats, on the other hand, have eyes that are perfectly adapted to hunting during times of less light, and they use this to their advantage. They can hunt effectively while also being less visible to those that hunt them.

Big cats in the wild use the lower light levels of dawn and dusk to help them stealthily approach their prey.

As for feral cats and some domesticated cats, their prey is typically smaller birds and mice, which are most active at dawn and dusk, making it a good time for cats to hunt.

Finally, a crepuscular pattern allows cats to sleep during the heat of the day to conserve their energy.

Do All Cats Have the Same Sleep Pattern?

Yes and no. They do if they’re living in the wild, but not necessarily if they live indoors.

Cats sleep anywhere from 12 to 16 hours a day. This is more than most mammals, and there’s an interesting reason for that, according to Rubin Naiman, Ph.D., for the Huffington Post. He says that housecats sleep so much simply because they can.

Sleep is dangerous in the animal kingdom. It makes most creatures vulnerable in an environment where all must watch their backs constantly.

The exception to this is the big cats in the wild. They are lucky enough to have few predators, so they feel secure about curling up at any time and having a snooze.

This is why you see lions and tigers in the wild sleeping out in the open savannah when few other animals do. And why your domestic cat can sleep just about anywhere.

So unless your cat is noisy at night, this ability to sleep whenever she wants can make it hard to know exactly when your cat is most active.

And as we’ll see, living with your family can also affect your cat’s sleeping patterns.

While the basic nature of the cat is to be crepuscular, you may not see this pattern in your cat.

My Cat is Diurnal. Is That Normal?

Yes. While living with humans, cats have less work to do. When cats are born in the wild, their mothers teach them how to hunt in the first eight weeks of their lives. Housecats raised indoors don’t get this training.

Housecats still have their instinctive hunting drive, but it’s much less intense than those born in the wild (and far less skilled). Because they have humans providing for them, they don’t need to spend much time working. Therefore they sleep more.

Because they don’t need to worry about hunting for themselves, being active during the crepuscular period of the day isn’t as critical to them. You may very well have a cat that has adapted to be more diurnal.

Do Cats Adapt Their Sleep Habits When Living with Humans?

Yes. A 2014 study found that housecats kept mostly indoors were more active during daylight. But cats who were outdoors for longer periods had higher levels of nighttime activity.

The cats who were given less time indoors also were significantly less active in general than the outdoor group. The study’s results show that cats who live indoors with humans can adapt their sleep patterns.

It depends on the family’s routines, whether your kitty is an indoor or outdoor cat, and individual difference.

Can I Train My Cat to Sleep at Night?

Yes, says Dr. Sophia Yin, DVM. Cats’ sleep-wake patterns are not set in stone. She has some great suggestions for helping your cat transition from a more-nocturnal pattern to a primarily diurnal one.

Dr. Yin also suggests training your cat to sleep in her crate during the night. But be prepared to wear earplugs for the first few nights!

The Animal Humane Society (AHS) also offers tips on how to change your cat to a daytime schedule. They suggest never paying attention to your cat when he wakes you, as he will see this as a reward. (Even negative reactions such as yelling at him get him the attention he’s looking for.)

If your cat wakes you to be fed earlier in the morning than you’d like, ignoring her might be the solution. Shut your bedroom door and pay no attention to her until you’re ready to get up. She should get the message eventually.

They also recommend feeding your cat his largest meal of the day in the evening. He’s more likely to sleep if his belly is full.

A gentle brushing before bed may also help your cat to sleep better at night.

While all these suggestions may help, don’t expect to change your cat’s schedule completely. The seven- to eight-hour stretch that we sleep is not natural for them. They tend to sleep in short bursts alternating with periods of activity.

But they can be trained to reduce their activity level in the hours when you sleep.

You may even want to consider adopting a second cat. Having a playmate could keep your cat entertained enough during the night that he won’t need to demand your attention.

Will It Harm My Cat to Change Her Sleep Schedule?

Training your cat to be less active at night will not cause her any harm. As long as her needs are met, she should have no negative effects.

However, while a gradual change to a diurnal routine won’t harm your cat, it’s important to know that it’s not natural for a cat to have sudden changes in sleep habits.

If you notice your cat being less active during the night without your intervention, it could be a reaction to illness. If you notice any other unusual symptoms, you should call your vet.

The most complete answer to the question of whether housecats are diurnal, nocturnal, or crepuscular is that, while in theory they are crepuscular, in practice it’s not so clear.

Because living with humans has caused them to adapt their natural behaviors, domestic cats can have any of these sleep patterns.

The majority, though, can be categorized as crepuscular, which could be good news or bad news, depending on your circumstances.

You can attempt to change your cat’s sleeping pattern using the tips in this article. Cats being cats, of course, none of these will work without their permission. If your cat isn’t on board, then you may have only one option.