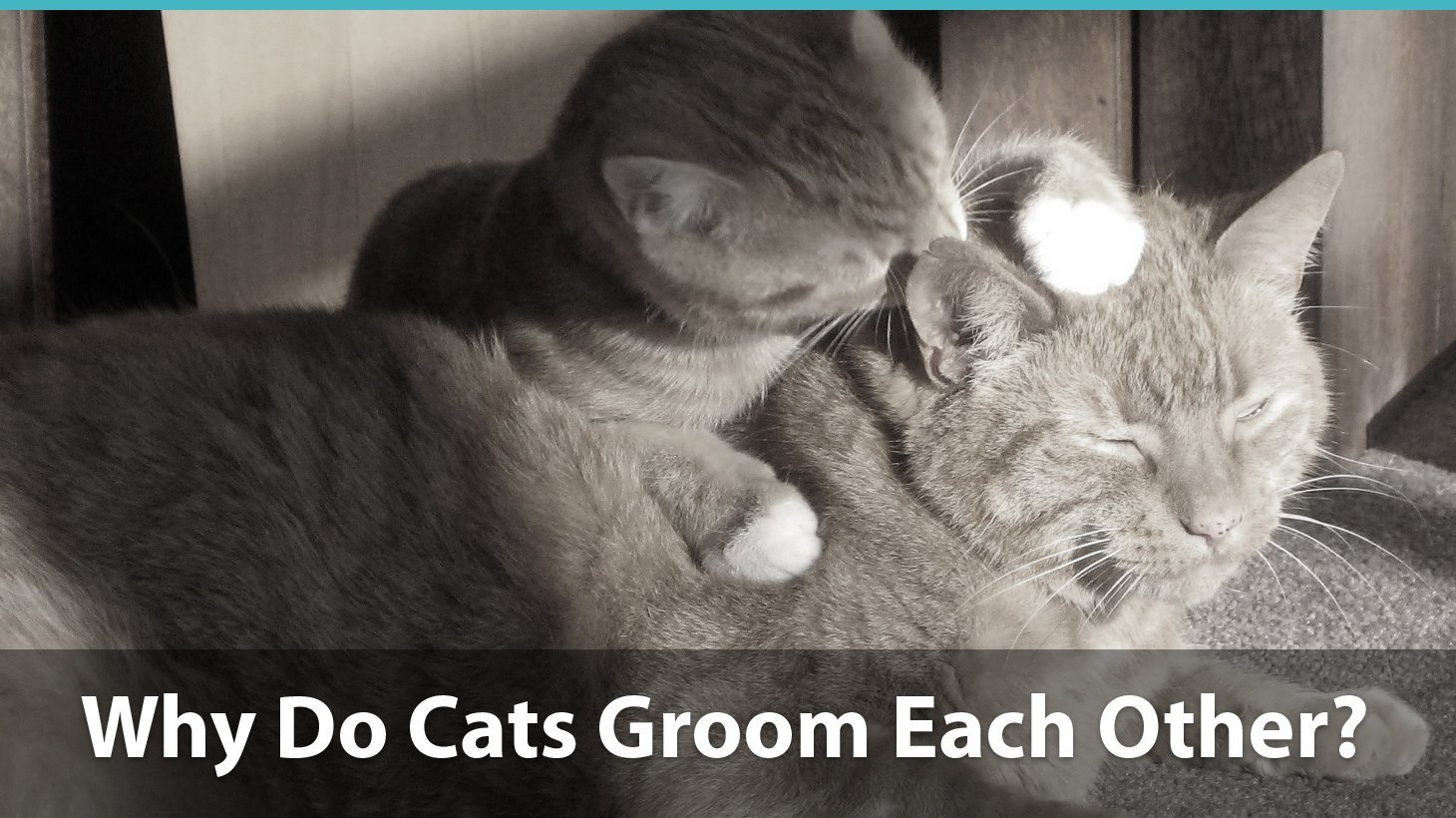 If you’re residing in a multi-cat household like I am you’ve probably seen some pretty puzzling things. Things that a one cat owner probably won’t see unless he/ she welcomes another furball into their home.

One such thing is cats licking and grooming each other. That’s called allogrooming.

Even pets that don’t get along might start licking each other at some point or another.

But if the two cats happen to be siblings, friends or even mates, then they will groom each other quite often. In fact, you might even see a pattern of dominance among them.

For example, one of the cats might be grooming the other more often, thus dominating the allogrooming routine. Such a hierarchy isn’t common for all kitties, but it’s not an extreme rarity either.

You probably know from first-hand experience how unpleasant it can be when your cat licks you with that barbed tongue. And you’re familiar with that painful sensation.

So why does it seem like cats enjoy it when other cats are grooming them? After all, that sandpaper-like tongue can’t be pleasing to the touch, right?

Well, cats do like grooming each other. They’re quite used to the feeling of their barbed tongues.

Moreover, they actively crave that feeling, especially when it comes to stressful situations. In those cases, you might see cats compulsively licking themselves or one another.

But today we’ll be focusing on the reasons why cats lick and groom each other, not on compulsive self-grooming.

Why do cats lick and groom each other?

The main reason for these actions is, of course, the grooming. Kitties are well-known for their self-cleaning impulses.

Check out my article if you want to learn more about why and how feline creatures groom themselves using their paws, tongues, and teeth.

Even though cats are big fans of maintaining their hygiene through self-grooming on a daily basis, they can’t clean every single area of their bodies. Sure, they do use their paws to reach some spots and they have agile bodies. Nevertheless, they still can’t clean everything.

Sometimes they need help from a friend, sibling or their pet parent. This is the most common reason as to why cats lick each other. Having another cat’s tongue and teeth untangle matted fur, remove dust particles and comb the stray hairs comes in handy.

Cats don’t have to ask their housemates to groom each other. It’s just a natural inborn instinct for them.

Even if the two cats aren’t that close, you still might see them licking each other once in a while. It’s puzzling and contradictory, but it’s just how cats are when it comes to personal hygiene.

The fact that they’re allogrooming, though, doesn’t mean you should leave all the work to the cats. You still need to use de-shedding tools, to bathe them and if necessary – to give them the occasional haircut. Even with a grooming buddy, your pets still need you.

One of the many ways cats show their affection to someone or something is through licking, similarly to dogs. Think of it as a sort of kissing.

Moreover, the grooming between two cats is also a bonding experience. They exchange scent, help each other clean out of reach areas and express how pleased they are with each other’s company.

If you see your cats licking each other, don’t bother them. Just sit back and enjoy their cuteness to the max. And maybe take a few pictures and show your friends and followers how adorable they are.

If your female cat ever had a litter, you know that as soon as kittens are born their mom starts licking them. At first she’s removing all that yucky stuff from their bodies. Then she’s warming them up and soothing them.

Some cats may lick each other out of maternal instincts. They’ll do it as a way of offering protection, comfort, and calmness to their feline housemates.

Don’t judge your pets for licking each other, even if they’re going towards their genitals or if they’re licking you with those scratchy tongues in the process. That’s just how kitties are.

If, however, you’re suspecting they might be compulsively stress-licking themselves and one another, call your vet. It’s always better to be an overprotective pet parent rather than a negligent one.

And don’t leave all of the grooming to the kitties. Regardless of how thoroughly they clean each other, they still need you for grooming purposes, affection, protection, and overall health care.

And if they happen to lick you or the rest of the people in your household – don’t punish them for giving you a scratchy or painful sensation. They simply want to show you how attached they are to you.