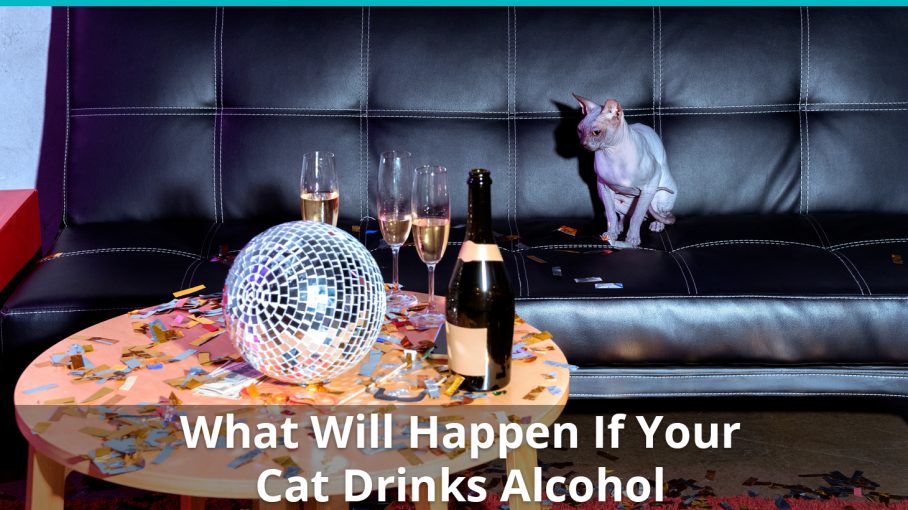 What Will Happen If My Cat Drinks Alcohol Like Wine, Beer, Or Spirits?

When it comes to human beings, some alcoholic beverages have positive side effects such as all the antioxidants in red wine. And, some would argue, the whole getting drunk part.

However, their benefits cannot outnumber the dangers they pose to a person’s health.

The same goes for your cat. It’s dangerous!

And it’s not like you have to purposely give it to your kitty…it’s absolutely possible for a cat to drink alcohol without somebody pouring it in its food or water bowl.

Your feline pal can lick alcohol off the ground after you’ve accidentally spilled some. It can also ingest alcohol by getting into the liquor cabinet or simply by trying to satisfy its curiosity regarding the scent and taste of the thing in your glass while you’re not looking at it.

Moreover, your furry friend can ingest alcohol from something other than an actual beverage. Mouthwash, medications, perfume, cleaning detergents, cooking products, and a plethora of other items containing alcohol can be found in any household. And due to felines’ unpredictable hiding habits, it’s possible for your cat to accidentally lick something alcoholic.

Drinks like beer and cider contain low percentages of alcohol in comparison to detergents or heavier beverages like wine. However, even a few drops of beer are bad for your cat.

What Will Happen If Your Cat Drinks Alcohol Like Beer Or Wine?

It depends on the amount of alcohol the kitty has ingested, on how long ago it ate, and on its overall metabolism. Basically, the cat will become excited or drowsy. However, the consequences of alcohol intake actually go further than just a short-term behavioral change.

Even tiny amounts of alcohol can cause:

Exposure to small amounts of soft or hard liquor can severely damage your fluffy friend’s health. The medical term for what happens to your cat is ethanol toxicosis (ethanol poisoning). If left untreated, it can have lethal outcomes, regardless of your pet’s breed or its age.

Ethanol poisoning can occur from beverages, as well as from alcohol-infused products like perfume, mouthwash, medication, cleaning supplies, and so forth.

Trying to give water to your pet to prevent it from dehydration and further damage won’t do anything. Cats don’t have a strong inborn sense of dehydration by default, so your kitty will likely refuse to drink.

Waiting around for the side effects to pass or for the cat to go into a drunken slumber is also not the answer. If your furball starts developing any symptoms of ethanol poisoning, you should call your vet.

The symptoms of ethanol poisoning actually resemble the ones which occur if your cat drinks antifreeze. Nausea, disorientation, vomiting, increased and uncontrollable urinating, suppressed reflexes, and a slowed-down heartbeat are the common side effects.

That’s why your pet may appear drowsy and uncoordinated or even lose consciousness. If the cat has eaten shortly before drinking alcohol, the symptoms might not occur for a few hours. However, if it has ingested ethanol on an empty stomach, the effects will kick in 10-30 minutes later.

Since a cat’s body can’t handle even tiny amounts of ethanol, unlike a human’s organism, your best chance at preventing a lethal outcome is to immediately call the vet.

Treatment And Management Of Your Cat Ingesting Alcohol

Be as descriptive as possible with the veterinarian. Tell the doctor what type of alcohol the kitty drank, where it came from, how much it manage to ingest, etc. Don’t forget to mention any health disorders or medications the cat is taking.

The vet will carry out further blood tests. They will determine the acidic levels and alcohol concentration in your pet’s bloodstream.

From there on the doctor will decide if your cat needs artificial ventilation (oxygen masks), intravenous fluids (for re-hydration), cardiac therapy, or any type of medication in order to lower the ethanol levels and treat the damage to your cat’s organism.

In order to prevent possible problems with alcohol, keep all beverages, paints, dyes, detergents, mouthwashes and other similar products out of pet reach at all times. Make sure everything is safely stored away because you can never fully predict your pet’s curiosity or where it will want to hide the next time you’re looking the other way.