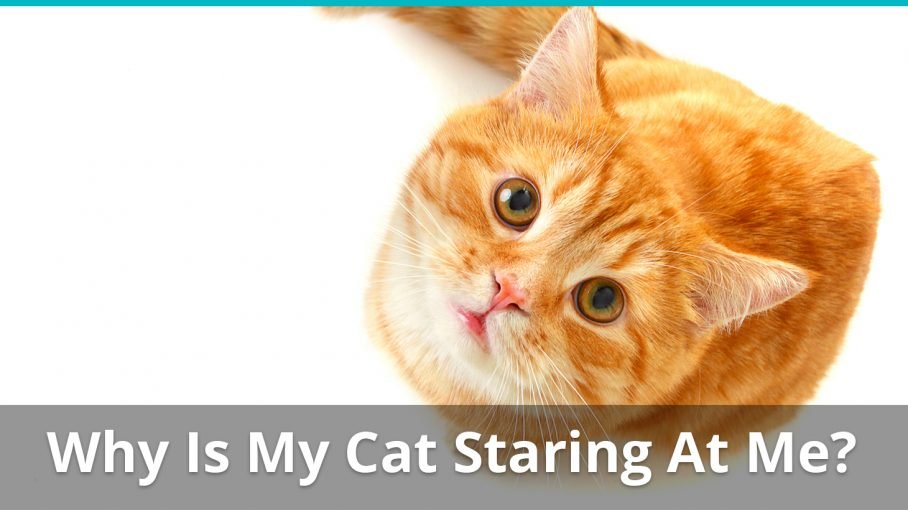 Why Does My Cat Or Kitten Always Sit And Stare At Me?

Cats are curious and capricious creatures. Try as we may, we often don’t quite understand the things they do.

One of the silliest things domestic cats of all breeds do is “stalk” their pet parents.

You know the type of stalking we’re talking about – no meowing, no pawing or poking, just sitting there and staring as if their life depended on it. It’s confusing and even a bit creepy.

In fact, this type of feline behavior is so incomprehensible for most cat owners that all they can think about is: why is my cat staring at me?

Reasons Why Your Cat Is Staring At You

Even independent cats know that they actually do depend on their pet parents for food, shelter, and social interaction. You’re providing everything your kitty needs, so you’re sort of its everything! As such, it comes only natural for the cat to look at you whenever it’s feeling insecure about something.

Cats experience a wide range of emotions. It’s possible for them to get confused by something as simple as an unfamiliar sound or odor. Your cat could be staring at you because it doesn’t know how to react in a certain situation and it needs your affirmation. By observing your own emotions, body language, and actions, it will gain confidence about how to perceive its surroundings.

Yes, cats do get bored just as easily as humans do. This can often lead to destructive behavior, which is way worse than the stalker-ish staring.

If your pet is bored, it will probably stare at you in hopes that you’ll provide entertainment. And it’s not always as a way to demand playtime. Your fluffy friend may simply be finding entertainment in whatever it is that you’re doing.

Cats easily learn what they have to do to get some sort of reward – treats, verbal praises, petting, etc. And most cats aren’t afraid to ask for attention or a reward. Just because your kitty isn’t approaching you or getting vocal, it doesn’t mean it’s not demanding something through its stare.

The same goes for food. Since your pet knows you’re the source of the food in its bowl, it’s only natural for the cat to stare at you whenever it wants to munch on something tasty.

As we mentioned above, your cat knows that its well-being depends on you. Whenever it feels scared, stressed out, anxious, depressed, cold, or in pain, it will actively seek your support. Sometimes it won’t try to snuggle with you directly and will just stare at you. New furniture pieces, noisy children, health problems and other everyday factors can easily upset any feline furball.

Last, but not least, the awkward staring may be caused by nothing more than sheer curiosity. Felines are excellent hunters due to their awesomely evolved senses. Everything catches their attention, even if they aren’t showing it 24/7.

If you’re doing something that seems interesting to your pet, it won’t stop staring anytime soon. Even if you’re just writing down the shopping list – as long as it sparks your furry pal’s curiosity, the cat will continue staring.

Don’t rush to spoil it with treats or attention every time, otherwise it will become needy and demanding!

Instead, try to find the reason for the cat’s actions. Study its body language – tail position, body position, ear movement, and so forth. Feline body language can tell you a lot about your pet’s feelings and how it sees its current surroundings.

If your furball appears to be under the weather, irritated, or anxious, try calming it down. If you haven’t paid any attention to it lately, opt for playing a game or for a training session. Don’t forget to check the clock – you might be delaying its dinner. And lastly, think about any symptoms of a health problem which the cat might have shown recently.

Not being able to pay attention to your feline pal 24/7 is understandable. It doesn’t make you a bad pet parent. However, neglecting your pet’s needs and ignoring it won’t lead to anything good. Make sure you’re spending enough quality bonding time with your kitty on a daily basis and it will cherish you for the rest of its lifetime.

Are Cats Nocturnal? Cat Sleep Patterns – How To Train Yours To Sleep At Night
Do Cats Dream? Can They Have Nightmares?
Do Cats Pant Like Dogs? What Does It Mean?
Cat Growling 101: What It Means and Why They Do It
Why Do Cats Stick Their Tongues Out? (+ 6 Surprising Cat Tongue Facts)