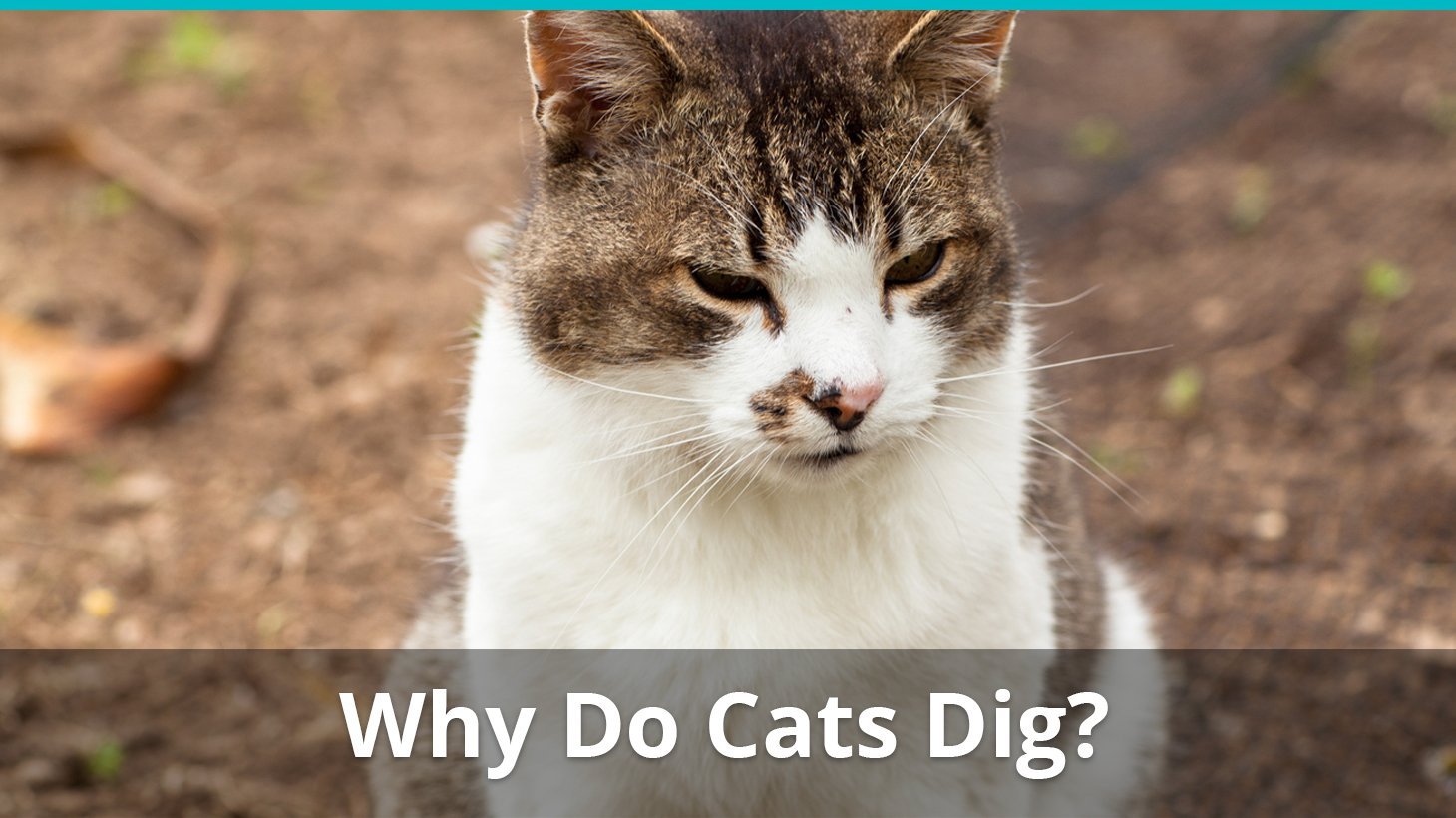 As pet parents we often tend to anthropomorphize our beloved feline furballs. Or in other words – we ascribe human-like qualities to them.

Some cats tend to resemble their owners a lot. Others simply follow them around from room to room, interested in whatever their pet parents are doing. And then there’s that type of cat that likes acting like a dog – being unconditionally loyal, greeting their owners whenever they come home, performing tricks, or lounging in their laps like typical lap-dogs.

Today we’ll talk about one particular dog-like behavior – the act of digging. Wait, can cats dig like dogs do? Yes, they can. And some cats actually do this quite often.

Don’t confuse the dog-like digging with the things your kitty is doing inside its litter box when it wants to cover up its feces.

Litter box digging is usually quite normal and simply a biological instinct to cover up their business.

We’re talking about the phenomenal process of digging up a hole in potted plants, in the garden, or even in your throw pillows without the need of filling that hole with waste.

If you’ve never spotted your own feline pal doing it, it doesn’t mean it hasn’t. On the other hand, if you happen to notice the kitty digging on frequent basis – don’t worry. This dog-like behavior isn’t as rare as you think. And it definitely doesn’t mean that your cat thinks he or she is a dog!

Where Do Cats Commonly Dig?

There are a few basic spots where you might find your indoor or outdoor pet cat digging or trying to dig a hole.

Don’t worry if any (or if all) of the above sound confusing to you. Cats are indeed whimsical and often misunderstood by their pet parents, but that doesn’t mean their actions are insane.

Why Do Cats Dig?

For most cats, regardless of their age or breed, plant soil resembles cat litter. As such, even if their litter box is clean or if you’ve changed to a different type of litter, the kitty still might want to do its business in the garden or in your potted plants.

Thus, it will dig a hole, do its business and then mask its scent. Sometimes the cat may not dig before relieving itself, but only after so that it will cover up the odor.

Hiding leftover prey is an inborn instinct in stray feral cats. However, some domestic ones may feel the need to hide their food, even if they’re kept strictly indoors.

But if the cat is digging inside its food bowl, its behavior is not triggered by the desire to hide a snack for later. When your pet is digging inside the bowl or on the floor around it, it either wants to find something a bit tastier than what it’s getting, or it’s just scent-marking the area around the bowl with the scent glands located on its paws.

Felines are notoriously territorial creatures. They can easily get jealous and will become fierce when trying to protect what’s theirs. As stated above, cats can dig around food or water bowls to mark the area. They can also dig on the floor just to rub off their scent without any visible reason. Yes, sometimes cats simply do that just because they can.

Some cats will dig up holes in the outdoors for hunting and playing purposes. Whether they’ve caught the scent of some bug or something else, if it’s sparked their interest, they’ll keep digging. Felines are among the best hunters inhabiting our planet. So if your pet is trying to hunt something, don’t worry about its strange digging habits.

What’s more, cats need to exercise on daily basis and that includes exercising their toes and claws. The designated scratching post you’ve bought isn’t always enough for them.

When your furball is digging on your bare skin, it’s actually kneading. The same goes for when it’s digging on blankets, clothing and other types of soft fabrics. Cats of all breeds and ages knead as a plea for attention and a way to express their affection. And of course, during the kneading process they are also scent-marking.

When cats get stressed out, their behavior usually becomes problematic. And whether they’re running around frantically, obsessively licking themselves, digging without explanation or doing some other puzzling things, these types of strange behavior should never be neglected.

If you’re unsure about your cat’s digging habits, don’t hesitate to call your vet. Chances are your kitty is just acting out of inborn instincts. But if its actions are caused by chronic anxiety, things could get worse. If you want to stop the digging habits in the soil, consult with a vet. He or she will tell you what types of detergents and substances you can use in order to make the soil repelling, but not poisonous to your pet.

2 thoughts on “Why Is My Cat Digging?”