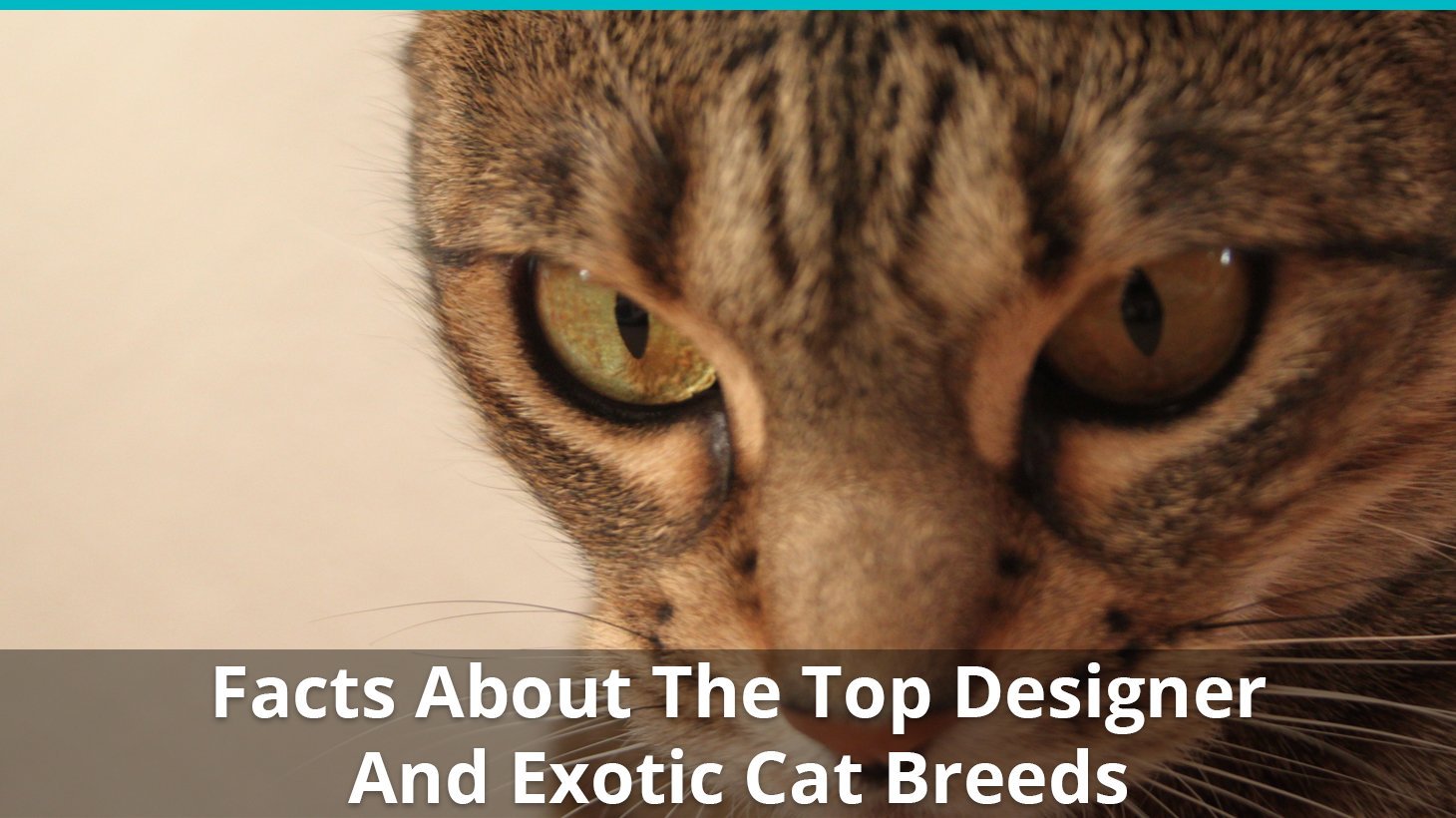 What is a designer cat breed? Is it Chanel CEO Karl Lagerfeld’s red spot Birman cat? Is it Taylor Swift’s Scottish Fold kitty? Actually, the latter is indeed a designer breed, but we’ll get to that point later.

Contrary to what you might think, designer cat breeds aren’t just the feline pets of fashion designers or other celebrities. They may be owned by designers, but that’s not where they got their name! So-called designer cats are usually hybrids of two or more natural breeds.

Sometimes designer cat breeds are also seen as exotics – most of which are bred as a mixture of domesticated felines and wild cats. And, of course, there are also those designer breeds which are a result of a natural gene mutation.

Designer and exotic cat breeds are growing more and more popular all over the world. Unlike the average domestic cat, these kitties are rarer. You likely won’t find them at your local cat shelter, and purchasing them will come with a hefty price tag. Their care may also not come cheap.

They require special care and nutritional needs depending on their age, DNA, and surroundings.

The majestic Bengal cat is among the most famous designer breeds. The Bengal is a cross between a wild cat and a domestic cat. Their large rosette spots and their elegant, lengthy bodies resemble those of wild leopards.

The Bengal is a large cat, reaching around 15 lbs.

Bengals are usually gentle tempered, but they constantly seek attention and are extremely playful. One of the main health risks in this designer breed is autosomal recessive disorder. Autosomal means that the disease affects male and female cats alike. Recessive means that both parent cats had to have the gene in order for their offspring to possibly inherit a disease. So if a male and female cat both had, say, a genetic blood condition, their baby could also have it.

Lastly, Bengals are among the top hypoallergenic breeds ideal for pet owners suffering from allergies, and they don’t require a lot of grooming.

Similar to the Bengal, the Savannah cat is also a mix between a domestic feline and a wild cat. These kitties are actually known as the world’s largest domestic cat as they can reach around 20 lbs. in weight.

Savannahs were bred for the very first time in 1986.

These designer cats are so loyal that they are usually compared to dogs. They’re also excellent jumpers and unlike your typical furball, many actually enjoy bathtime. Their exotic looks – tall and slender frame, spotted patterns, and wide ears – bear a resemblance to the original Serval wild cat which was used for the creation of the Savannah.

This breed is actually illegal in several US states, as well as in Australia.

The Oriental Shorthair kitty derives its roots from Thailand and is a distant cousin of the Siamese cat.

This breed is famous for its triangular face and its incredible intelligence. Not only are these lovely furballs absolutely stunning in looks, but they are also the only breed which comes in over 300 different colors! The almond-shaped eyes and wide ears are their most notorious features and they are among the most loudmouthed cats in the entire world.

Strangely enough, the Ocicat resembles a wild cat, but it doesn’t bear any wild DNA.

This exotic breed is a mixture of Oriental Shorthair, Siamese, and Abyssinian, which is why it comes in a variety of colors. The most sought-after are the silver Ocicats.

These kitties are so sociable that they will make the perfect companion for a family with children and are also great for dogs. Larger than the common domestic cat, the Ocicat’s muscular body and exotic spots give off the impression that it was bred as a mixture of a wild cat and a domestic feline.

Nope, we didn’t misspell it. The Toyger is the so-called “toy tiger” and it goes back to the 1980s as well. I’m sensing a trend of what people were into in the 80s.

This breed’s notorious stripes mimic the ones of an actual tiger and the ideal desired markings follow a natural “makeup” print – mascara and white spectacles around the eyes, and black lipstick around the lips.

Friendly, intelligent, and energetic these felines are among the most spectacular cats out there. The Toyger is definitely a fascinating and gorgeous kitty. This breed is extremely expensive and there are only about 30 breeders of Toygers all over the world.

Instead of being a product of two or more breeds of domestic and wild cats, the Scottish Fold actually became a popular designer breed due to a natural gene mutation.

These kitties have small bent ears which appear as though they have been folded forward. The big yellow eyes of the Scottish Fold and its signature bent ears are the two main features which contribute to its owl-like appearance.

Originating from Scotland in the 1960s, these affectionate kitties are among the top sought-after designer breeds. Taylor Swift has two Scottish Folds named Olivia Benson and Meredith Grey.

Designer cat breeds require special devotion due to their mixed DNA. Proper grooming, high quality cat food, and lots of care are essential for designer and exotic cats of all breeds and ages.

Of course, some designer breeds will have different nutritional needs than others, so you’ll need to consult with your vet if you’re planning on getting one of these felines.

Many designer breed and exotic cats imitate a wildcat’s stripes to near perfection, whereas others are unique on their own. Let’s take the Oriental Shorthair cat for example. Did you know that it comes in over 300 different colors? These colors can be categorized as solid, shaded, smoke, parti-colored, tabby coated, and bicolored. Some people wonder why you would want a boring black kitty or a ginger one when you can have a tiger-striped Toyger cat or a blue Scottish Fold.

Unfortunately for many cat lovers out there, the Fel-d1 allergens found in cats cause severe allergic reactions. As such, they can never have a feline pet. Or can they? As stated above, no cat will ever be 100% hypoallergenic. However, a little-known designer and exotic cat breed fact is that many of these kitties don’t produce as much of the Fel-d1 allergen as other, more common breeds. Moreover, most of these breeds are short-haired and don’t require a lot of grooming. After all, nobody wants to have their clothing and furniture buried in cat hair!

Illegal In Some Countries

Many of these feline furballs, such as the Serval and Savannah, are indeed illegal in some countries. It’s understandable why many countries forbid these cats, which bear wild DNA, for safety purposes.

Every cat is special on its own. And every breed has its own dietary needs. When it comes to designer cat breeds, however, these kitties really do have unique nutritional needs.

You can’t feed a designer breed with ordinary cat food. High quality food items are vital for these creatures. Not only are they natural carnivores, but many of them bear the DNA of particular domestic breeds. They may eat cat food suitable for one domestic breed, but they might suffer from food made for another breed. In this sense, designer and exotic felines are quite fragile.

Dietary needs are not the only factor which poses threat to an exotic breed’s health. Most designer breeds suffer from a number of issues. Progressive retinal atrophy, lymphoma, autosomal recessive disorder, kidney diseases, and so forth are some of the main health risks. Due to their mixed DNA, such breeds require special devotion, especially when it comes to physical and mental health care. Why mental? It’s quite simple – if a designer breed bears wildcat genes, it may act partially like a wildcat. This means it will need more space, more adventure, and more playtime – possibly really rough playtime.

If you wish to get a designer or exotic cat breed as a domestic pet, don’t act upon a whim. Finding and purchasing these furballs (and taking care of them) is expensive and time consuming. Your kitty’s health should always come as your priority. If you can’t devote yourself to the happiness and health of your pet, or can’t afford to pay for its unique needs, don’t get one.

How much do exotic cats and kittens cost? Price analysis and buying guide.

Exotic and designer cat breeds are expensive because they require a special, lengthy and strict breeding process that other kitties don’t require. As such, coming across a pure designer or exotic cat is rare. And the price for these felines is higher than for most domestic cat breeds.

Here’s a quick price analysis of the most famous designer breeds:

Are you shocked by this price analysis? Don’t be! Exotic and designer cat breeds are expensive by default. Kittens cost more than adult cats, but that’s not the only thing that’s expensive.

Due to the various health problems and wild DNA these cats have, their healthcare is also pricier than the healthcare for a common domestic breed. In other words, you need to earn a small fortune in order to be able to afford an exotic cat.