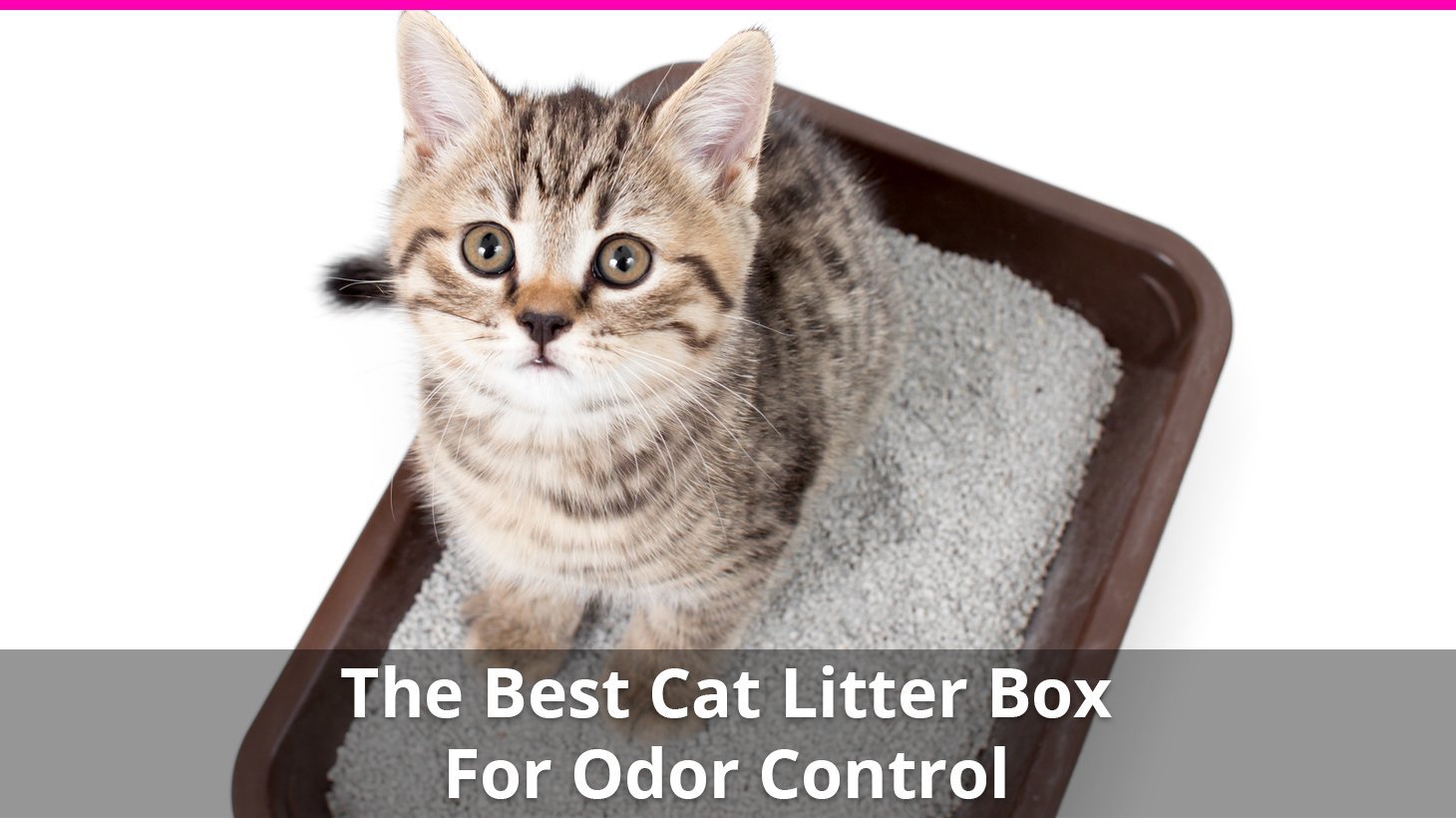 The one negative thing about having a cat at home is, well, it can get kind of stinky. Not because cats are gross, but because their litter boxes are. That urine ammonia smell…

And having lived in a small apartment at one point with a kitty and her litter box, I know there are some major issues that need to be dealt with on this matter.

I’ve pulled together my knowledge of no odor litter boxes, cat litter deodorizers, and anything I could think of for a quick overview and review so that you can find your best combination possible.

There are three components to reducing the odor from a litter box. These work together to prevent, eliminate, and abort odor issues, depending on the particular environment in which you live, the GI issues kitty might have, and the space in which the litter box is placed.

The right litter for fighting odors will be, of course, one of the biggest parts of this odor-fighting system. That’s a whole massive subject, however, since litter comes in a ton of different material types that your cat may or may not like.

Next, the right odor-fighting accessories are also pretty important. My husband has used Arm & Hammer baking soda in a pinch, which can be effective, but I’ll touch on some of the other specific products below to help make sure you can really combat those odors.

Finally, the best cat litter box for odor control is your bigger ticket item and will be the most important part of your system.

How to Choose the Best Odor-Free Litter Box

Just like with any other product, there are a few things to keep in mind as you choose a litter box. You’re here because the stink is an issue – and trust me, I’ve been there! Gus is one of the stinkiest kitties on the planet! – and that means you’re serious about dealing with this problem.

The things I looked for to help combat this problem include the following couple of items.

For the most part, litter boxes are made of the same stuff. However, there are some made of sturdier quality plastic, and, even more exciting, some that are infused with Microban.

This stuff is an anti-microbial material that helps to prevent mildew, mold, and microbes from building up, which can make your kitty and family ill.

Most of us think of hooded litter boxes when it comes to odor-fighting litter pans. However, it’s important to make sure that your cat has a hooded box with proper filtration and ventilation. The odors in there are harmful to kitty, not just offensive to our noses.

How I Chose These Odor-Free Litter Boxes

I’ve reviewed a variety of litter boxes recently, so I started with some of the similar sources I’ve used before, like other review sites, the “best of” lists on Chewy and Amazon, personal reviews given by other bloggers, and of course the litter boxes I personally use.

This gave me a list of about 35 odor-free litter boxes, so I narrowed down the list by cutting out ones I’d looked at before and deemed “unworthy” of other lists. That dropped the choices down to about ten.

From there, I investigated specifically into the boxes ranked highest, with the most comments about non-smelling litter box options and came up with this list of what I personally believe are the best choices in this category.

Reviews of the Best Cat Litter Boxes for Odor Control

Note: Catological readers receive a $25 discount when clicking the button below.

The Litter-Robot III is hands down the best litter box for smell. Even Lady Stardust’s seemingly rotten insides are no match for this thing. And that’s saying a lot.

The Positives of the Litter-Robot III

Like any automatic, self-cleaning litter box, the Litter-Robot is a scoop-free option, meaning you set it, plug it in, and leave it alone. There’s a waste compartment that you empty out easily, and, well, that’s pretty much it other than the occasional cleaning and the refilling of the litter itself.

The Litter-Robot III is safe for cats who take a while, too, since it gives a seven-minute lapse from activation to the time it starts cleaning the pan. And if kitty decides he’s not really finished and comes back, the Litter-Robot will stop and allow Fluffy to finish his business safely.

Finally, the filtration system is awesome. It uses a carbon filter to clear out the dust and odors better than anybody else.

The Negatives of the Litter Robot III

The main issue most people have with the Litter-Robot is the price. It’s fairly high at about $450. The majority of cat owners have said it’s worth the price, but $450 can be prohibitive for a lot of us.

But, keep in mind that if you choose this litter box, you get $25 Off (automatically applied) by purchasing through our link below…thanks Litter-Robot!

Also, unfortunately, the Litter-Robot isn’t for small cats. Any kitty weighing in at under five pounds won’t be able to activate the trigger.

Finally, it’s also a pretty hefty litter box. It weighs a bit and takes up a fair amount of space. If you’ve got a small home, you may, unfortunately, need to consider a different option instead.

The Litter-Robot III is the best of the best litter boxes for eliminating odor.

It’s scoop-free, meaning you pretty much don’t have to do anything after you set it up. And since it’s automatic, it eliminates the odors from cat waste within a short period of time, safely, after kitty has gone on with her day.

You can find a more in-depth review for the Litter-Robot III elsewhere on Catological.

Overall Rating: 4 out of 5 stars

The Cat Genie is ranked number two because of the biggest challenge for most of us: having a water line run.

It’s more affordable than the Litter-Robot, though, at just a little over half the price. So if having a line run isn’t too big of a deal, you may want to consider this choice instead.

The Positives of the Cat Genie

The Cat Genie is another automatic, self-cleaning litter box. This one, however, uses a water line to flush the waste down. Yes – that means this litter box actually washes itself, too.

The Cat Genie uses specific granules that are washable and non-absorbent. This means that after kitty uses the potty, the Cat Genie can thoroughly clean and sanitize the granules, and you don’t have to replace them very often. This eliminates odors better than most options, plus it saves you some money in the long run.

The Cat Genie is also a more suitable size for smaller homes and tighter spaces. So, if you’ve got small quarters, this is a great option for an automatic, smell-proof cat litter box.

The Negatives of the Cat Genie

There is really only one major negative I can see to this litter box. The installation process is, well, a process.

Unlike other litter boxes that don’t smell, you have to have a water line run for it.

For the plumbing-skills inclined, you’ll be fine. For the not-so-handy types – like me – you’ll have to hire someone to come in and install this smell-proof litter box for you.

The Cat Genie is a great self-cleaning odorless litterbox. It washes away the waste and stink, and is almost completely hands-off, while also costing just a little over half of what the Litter-Robot 3 costs.

It’s not the absolute top of the line, but it sure comes close. This is the best cat litter box for odor control for anyone on a mid-range budget.

>> Tap Here To Read More Reviews and Get The Best Price On Amazon.com <<

For those not looking to shell out hundreds of dollars on an odor-free litter box, the Catit Jumbo Hooded litter box is the best choice and one of our runner-up picks for best litter box.

The Positives of the Catit Jumbo Hooded

The Catit is a large litter box, so one of the big points for me on this one is that even larger cats can easily use it. They can crawl in, turn around, and scratch a bit comfortably.

It’s also got a large entryway, which is important for a lot of cats to feel safe while doing their business.

The Catit Jumbo also has an effective carbon filtration system, which is incredibly important on any covered litter box.

The dust particles and ammonia odors inside a litter box can be harmful to Garfield, so this filtration is a must. The filters reduce the odors and suck out the dust making it a safer – and far less smelly – place for kitty to get things done.

The Negatives of the Catit Jumbo Hooded

Unfortunately, the Catit Jumbo requires a lot of litter to have a deep enough layer for your cat’s potty habits.

But, if you’ve got a large cat, you’d be using this amount of litter anyway, most likely, so it’s probably not much of a problem unless you have difficulty picking it up to move it.

The Catit Jumbo Hooded is also fairly large and takes up a bit of space, meaning it’s not so great for small apartments. But, again, if you’ve got a large cat, that’s just part of life.

If you’re not able to do a self-cleaning no smell litter box, and want to keep a lid on things, the Catit Jumbo Hooded Litter Pan is probably your best bet for an odor control cat litter box.

It’s large enough that most cats can use it, it’s got the right kind of filtration, and it’s much more budget-friendly than the self-cleaning models.

If you’re looking for a slightly cheaper option still, there are two small, inexpensive options I can recommend. They’re both made with Microban, meaning they’re anti-microbial and easy to clean.

As I mentioned before, there are three parts to this odor reduction equation. The right litter is critical, the right box it vital, and so are the accessories.

I personally use this deodorizer in either the spray or the powder form, depending on the litter I’m using in the given litter pan. I have found that these both work wonders on the odor, even when you don’t have the top-of-the-line litter box.

The powder keeps the box fresher all the time, while the spray gives a boost of fresh scent right after a cleaning.

As to cleaning the litter box itself, the right cleaner is also important. The NaturVet Odokleen option is a really fantastic cleaner for eliminating residual odors and helping to prevent more from clinging on once kitty gets back in there.

It doesn’t use any harsh dyes or ingredients and is safe for all kinds of washable fabrics and materials. That means it’s hypoallergenic and safe for kitty and your favorite jeans.

Once you’ve decided on the right litter box for your budget and studied up on the best cat litter for your cat’s persnickety ways, don’t forget a safe cleaner and cat litter box odor eliminator like a deodorizer.

The combination of the three ingredients in this odor-reduction magic will change how you and your cat live and breathe. Toss in the right litter mat, and you’re all set for a nearly odor-free home!