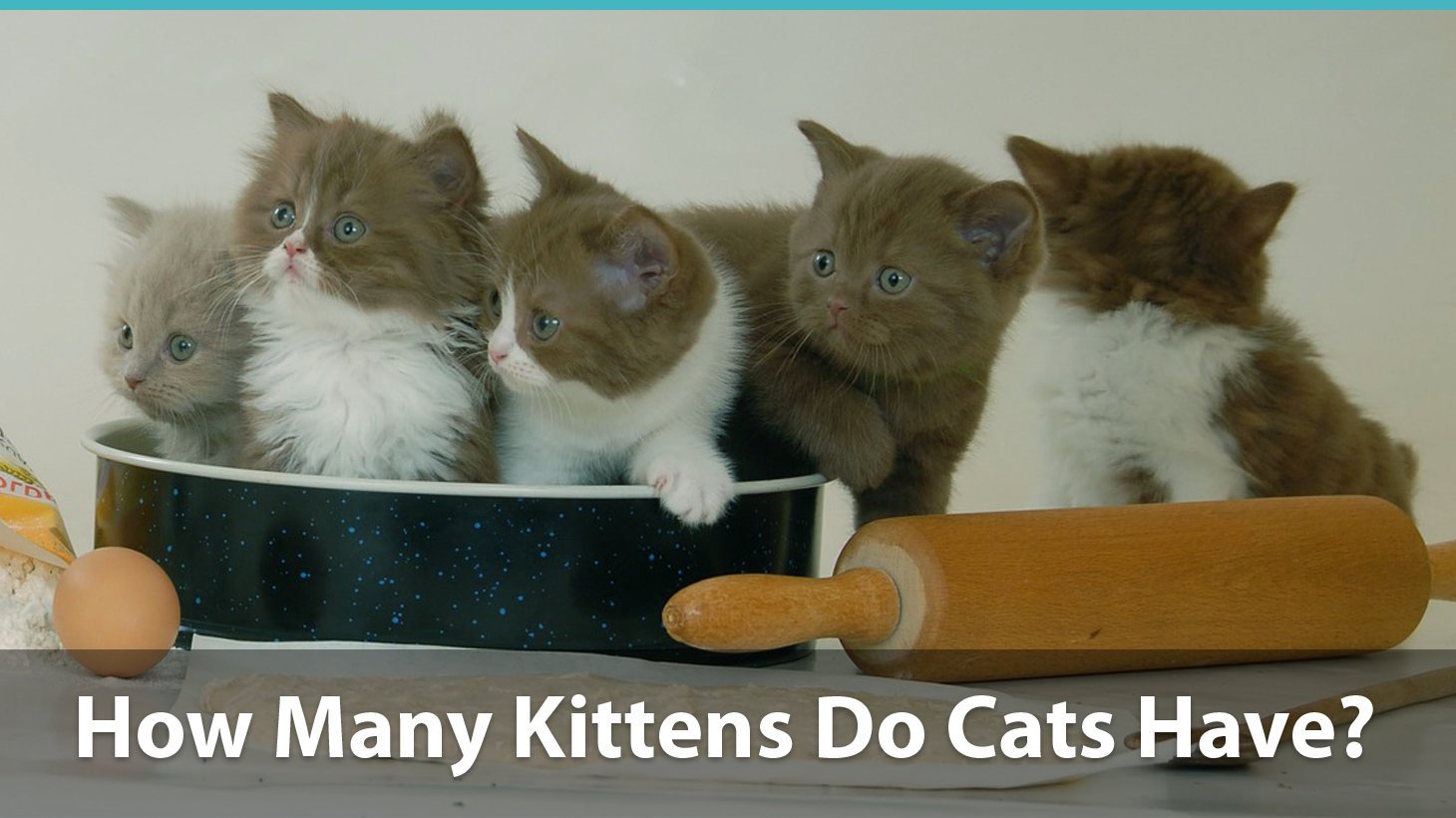 Kittens are so adorable, playful and huggable that even people who aren’t big cat fans have wished they could get a kitten at least once in their life. I mean come on, how can you not want so much cuteness around you?

It comes natural to many cat owners to want to breed their female kitty and to experience the joys of having an entire litter of kittens. And female cats can easily make that dream come true.

They go into heat often and can actively reproduce for up to 3 times a year! What’s more, a female cat’s pregnancy lasts only around 2 months before she gives birth to an adorable litter of baby kittens. And it’s only a matter of a few months before these kitties reach reproductive maturity and are able to have kittens of their own.

But how many kittens will a feline furball have? Will the litter be small? How about the total number of kittens a cat will have throughout her entire lifetime? You can find the statistics below.

How many kittens can a cat have per litter?

Depending on the breed, health, surroundings and numerous other external factors a female cat can bear a different number of kittens each time she gets pregnant. But just because some breeds are significantly larger than others, don’t expect the Munchkin to give birth to one kitten, whereas the Maine Coon – to ten.

On an average scale female cats give birth to 4 kittens per litter.

However, this is an average statistic and can’t be applied to every single situation. It’s completely normal for your healthy, average-sized adult indoor cat to give birth to 5 kittens per litter and then for it to have only 3 kittens from the next litter.

Of course, similarly to humans, the feline reproductive capacity decreases with age. This means that the older your fluffy lady friend gets, the less kittens she will bear per litter.

During the last stages of a cat’s pregnancy you can easily tell how many kittens the litter will produce. As they start kicking and moving inside her belly, you’ll be able to see and feel them. Ultimately, at an earlier stage you can take the cat to the vet’s office. The doc can tell how many kittens she’ll bear via ultrasound.

How many kittens can a cat have over a lifetime?

Unlike human females, cats don’t exactly go through menopause. What does this mean? It means that if you want to (and can afford it), your cat will give you a lifetime of babies – literally! Senior cats keep getting pregnant too, so basically cats can give birth to new kittens throughout their entire lifetime.

But how many kittens will your cat have over a lifetime?

Most domestic cats tend to live around 12-15 years. If you do simple math with the average statistics of kittens per litter, you’ll get the following result: 4 kittens per litter, 3 times per year for 15 years makes a total of 180 kittens over a lifetime. However, females reach reproductive maturity only around the end of their first year and they probably won’t be able to bear kittens in their last couple of years. Besides, you wouldn’t be able to keep up with new kittens every few months!

In other words, these numbers are probably going to be lower than the average. On the other hand, feral cats residing outdoors mate with numerous stray males each time they go into heat. If they’re lucky enough to have good health, proper shelter and lots of nutrition, they can have more than 180 kittens throughout their lifetime.

How to cope with so many adorable kittens?

Unless you want to purposefully breed your pet, chances are you won’t get to have so many kittens. The healthcare can be extremely pricy – not to mention other non-health-related annual feline expenses.

On top of that, taking care of a pregnant female and her newborn kittens is challenging on many other levels.

What you can do is make sure your precious furball won’t become a breeding machine. This means trying to limit her access to any males, unless you’re willing and capable of fully devoting yourself to dozens of kittens each year. Spaying the kitty is another option, although many pet parents are against it. Feline overpopulation is a serious issue, though, and contributing to it isn’t the best idea.

In reality, spaying is a humane decision. Not only does it prevent the mood swings, anxiety and stress that come with each heat cycle, but it also reduces the chances of having your pet run away from home. Moreover, this way you also won’t have to worry if you can’t find proper homes for each kitten she bears. After all, each kitty on the planet deserves to have a good life with responsible pet parents who surround it with care, love and devotion.