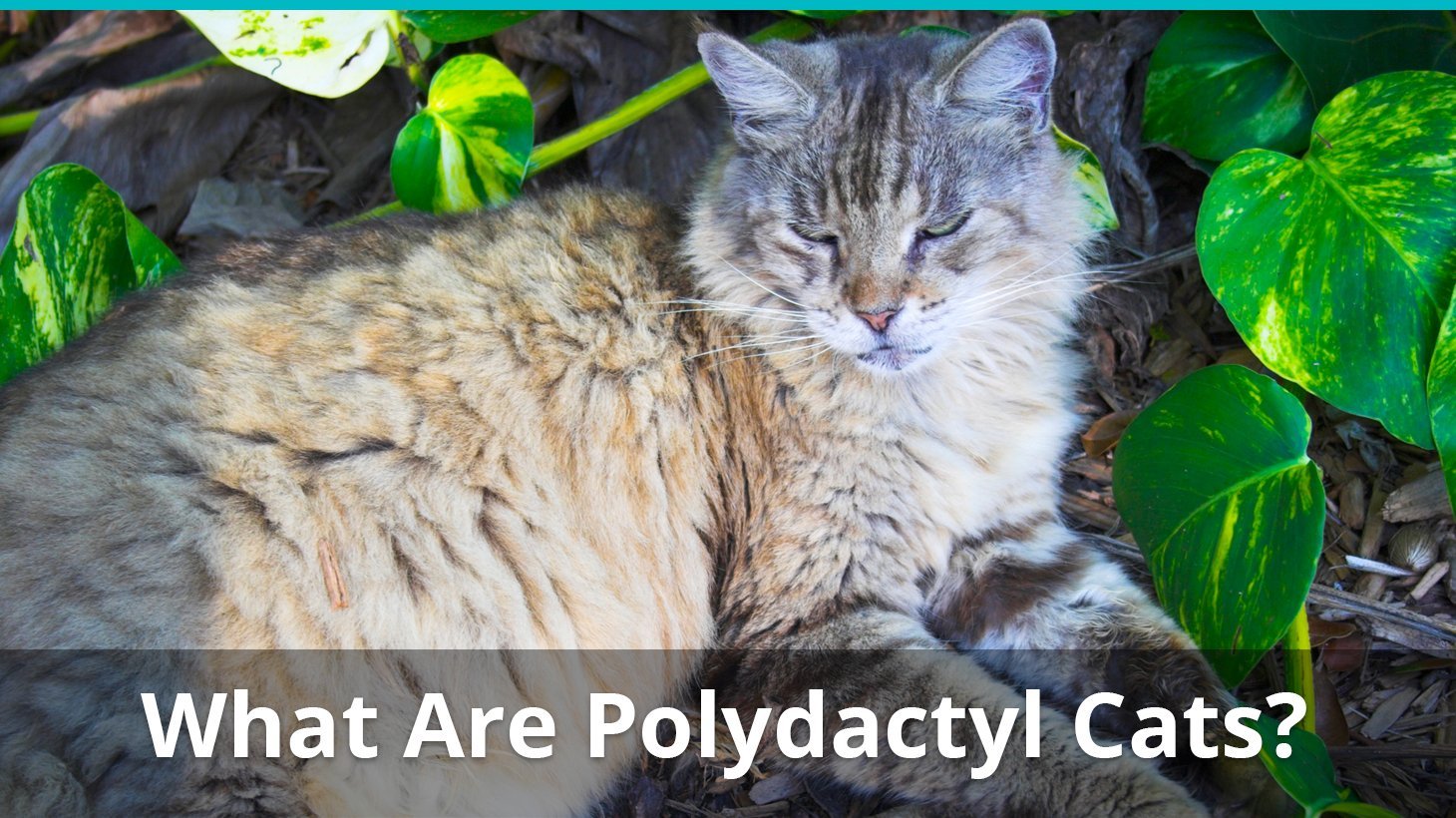 You might have come across the term “polydactyl cat.” And chances are, you want to know what it means. We actually refer to it a few times in our ultimate guide to cat breeds.

What Is A Polydactyl Cat?

Unlike human beings, cats don’t have a total of ten toes – they actually have only 18 toes in total. The paws on their front legs have five toes each, whereas each of their hind legs has four toes.

Each toe has its own claw, pad, and bone structure.

In most instances, polydactylism affects the kitty’s front paw(s).

Nobody really knows how this genetic mutation occurs in felines. Today, some breeders focus on the polydactyl genes, especially when it comes to the so-called American Polydactyl Cat (not an actual breed) and the Polydactyl Maine Coon (a pedigreed variation of the standard Coons). The polydactyl trait can also be observed in several designer and exotic feline breeds.

Polydactyl cats are most common in the eastern part of Canada and the US and in Wales, South West England, and Hull. Despite this, polydactyl furballs are residing all over the globe. In fact, your own fluffy pet might have an extra toe, which you might not have seen just yet.

There are many cool facts about polydactyls.

Once upon a time, polydactyl cats were quite popular on ships. Sailors thought their extra toes would make them better at hunting mice and other rodents.

Not only were polydactyl furballs respected and well-cared for by sailors, but they were also perceived as gems at sea. They were so praised by seamen that they were given as gifts and were thought to bring good luck to the ships’ crew members.

Polydactyl Cats Can Have A Lot Of Toes

Polydactyl cats can have up to 8 toes on each leg.

The Guinness World Record for the cat with the most toes on the planet is currently held by a feline named Jake. And said kitty is notable for having a total of 28 toes!

Some of the most common nicknames for polydactyl kitties include Mitten Cats, Snowshoe Cats (Snowshoe is actually a breed), Thumb Cats, and of course – Hemingway Cats.

Why Are They Called Hemingway Cats?

Due to sailors having such respect for polydactyl cats, a captain once gave the Nobel Prize-winning author Ernest Hemingway a polydactyl kitty as a gift.

The cat in question, named Snow White, fascinated Hemingway so much with its extra toes that the late novelist later became quite well-known for his affinity towards all polydactyl cats.

The author’s intense fascination with kitties like his own Snow White is the reason for the nickname Hemingway Cats.

In Key West, Florida, Hemingway’s former home now serves as a public museum. Approximately 40-50 feline furballs reside on its premises, all of which carry the polydactyl genes.

Nearly half of these cats have extra toes, with the genes being recessive in the others. Legend has it that many of these cats are descendants of his pet kitty Snow White.

The people caring for the museum show great love and devotion to all cats residing in the area. It’s normal for a domestic cat to have annual vet check-ups. However, these cats also have expensive health care and treatments against diseases and parasites all year round.

Here’s yet another fun fact about the Hemingway Cats of our world. During his lifetime, Ernest Hemingway owned more than one polydactyl kitty. And he named all of his cats after famous people.

Even nowadays, the caretakers at the museum are still naming the new kittens after famous public figures!

No kitty out there is disease-proof, and polydactyl cats are no exception. In fact, they come with their own set of physical health risks.

The extra claws of polydactyl kitties are different from the standard ones.

Even one of these extra dew-claws can pose a danger to your furry pal if it’s carrying the polydactyl gene. The dew-claws won’t wear out when the cat scratches the furniture or uses the designated scratching post. And they can keep growing longer if you don’t clip them.

One of the most dangerous risks dew-claws pose is the risk of getting embedded into the toes. Needless to say, this causes serious problems.

In addition, the dew-claws may grow around the toes, limiting the cat’s proper movements when walking or engaging in other activities.

Then there’s the maintenance. While most times, the nails on the extra toes are healthy if taken care of properly, having to trim extra nails can add additional stress to your cat if they already hate the process, as most felines do.

Sometimes, extra toes don’t grow as big as the regular ones with polydactyly. They can be tiny, deformed, or even appear as if they’re hanging off the paw.

In some cases, it’s possible for the cat to accidentally rip the toe if it catches on an object. This may occur while performing average everyday activities, and it may eventually lead to the need for surgical extraction.

Ripped, ingrown, and embedded claws and toes can lead to different infections, including abscesses. Removing the dew-claws doesn’t automatically guarantee that the polydactyl toes won’t cause any issues in the future.

Polydactyly in cats requires explicit attention, and pet parents must handle their cats with great care.

If you own a cat, you should carefully examine its four paws to see if it is polydactyl or not. Sometimes the polydactyl genes are visible as a tiny sprout-like particle instead of an actual digit. And as such, you can easily miss it if you’re not paying attention.