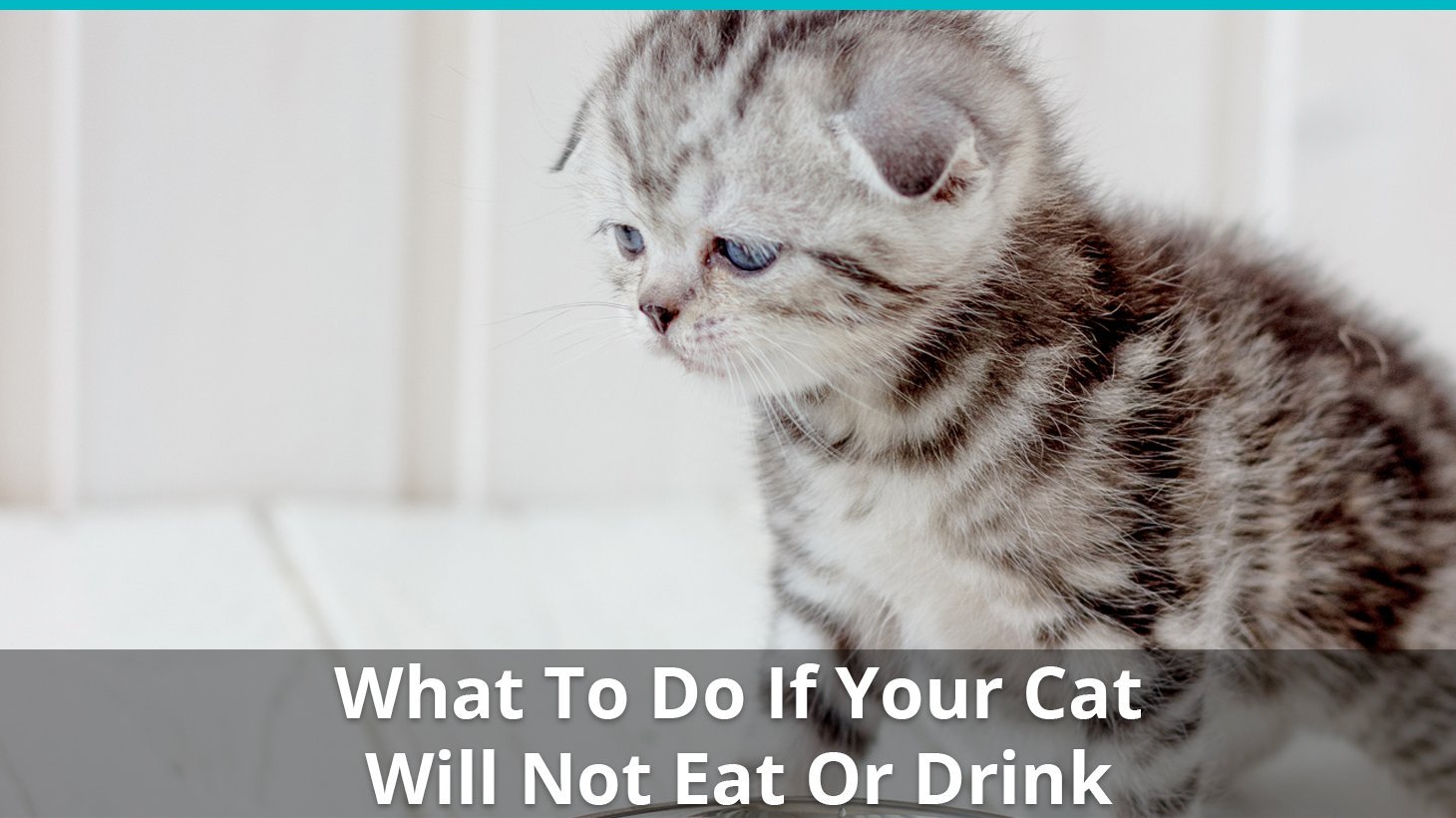 Felines are curious, whimsical, often misunderstood and sometimes quite troublesome creatures. If you’re a relatively new pet parent, you know how difficult taking care of a cat can get. And if you’ve had experience dealing with feline furballs before, then you probably have tons of stories to tell in which the cat has been the main culprit for your sorrows.

Kitties of all breeds and ages can be a pain in your neck.

Sometimes they’ll do crazy things just for the kicks of it, whereas in other cases they’ll just start acting out without a clear explanation. Either way, they’ll behave strangely for one reason or another.

The most common type of alarming behavior is when your cat is not eating or drinking all of a sudden.

Yes, cats are capricious by default.

But what happens if your pet won’t eat or drink even if there’s no apparent reason for it? Should you start worrying? Should you call your vet? Or should you spoil the cat by trying every single food item you can find in your house?

Before you start panicking, take a deep breath and try to relax. There are numerous reasons as to why your cat refuses to eat or drink.

Some of them are potentially dangerous to your feline furball and could indicate an undiagnosed health disorder. Others, however, are completely natural and harmless. So, without further ado, here are the reasons as to why your cat is refusing to eat or drink.

Why Is My Cat Not Eating Or Drinking?

There are two types of factors behind your feline pal’s unlikely behavior – physical and emotional. Similar to us, human beings, cats may refuse to eat or drink depending on the physical changes in their organism, as well as on the emotional responses to particular situations, places and people.

The Bowls Are All Wrong

A feeding station is just as essential as a cat’s sleeping spots, toys and litter box are.

Furballs of all breeds and ages can refuse to use their food and water bowls if they don’t like the actual bowls. For example, if the bowls are too deep, the cat won’t use them because it will be hard to not get its whiskers wet or dirty.

Moreover, if you don’t clean the bowls after each meal, the kitty will easily sense that. Think of it as how repulsive it would be to you if you had to use dirty dishes or glasses.

Another reason as to why the bowls might be a problem is them being too close to each other. Some cats won’t mind that. However, other kitties can’t get over their inborn instincts of hunting for food and water out in the wild. As such, they will want the food bowl to be nowhere near their source of water.

And lastly, the cat may refuse to drink from anything other than a pet water fountain or a faucet. In other words – it will want a source of fresh, running water.

Whimsicality is a common trait, which basically all cats out there share with one another. Even the most laid-back, tolerant and calm kitty can eventually become capricious.

If your cat is refusing to use the feeding station out of whimsicality, there are 3 basic reasons for it.

Firstly, it probably knows you’ve secretly tried to hide a supplement or some medicine in the food or in the water.

Secondly, it’s probably waiting around to find something tastier and better-scented than the food it already has.

Lastly, it probably thinks you’ll indulge it with some table scraps. After all, the grass is always greener on the other side of the fence. And cats don’t know that the chocolate dessert or cheesy snack you’re keeping to yourself is bad for them.

By default the feline organism works differently than ours. Felines lack the strong sense of dehydration which humans have.

If your fluffy friend is refusing to drink, it could be due to its weak sense of dehydration. It just doesn’t realize it’s supposed to be thirsty.

What’s more, if you’re feeding it mainly with wet canned food, it will reach its daily water intake faster than if you’re giving it dry food due to the high amount of moisture in canned cat food. If that’s the reason behind your pet’s refusal to drink, there’s no reason to worry. However, if it’s not drinking at all, there’s an actual issue at hand.

There’s a possibility that your kitty could be suffering from indigestion, and as such, refusing to eat or drink. Digestive disorders can be caused by a variety of things, including hairballs.

It’s also possible for your furball to be feeling nauseous if the last thing it ate was hard to digest.

However, it can also be refusing to take liquids or food because it’s currently suffering from another issue like diarrhea, stomach pains and other problems related to poor digestion.

You could be overfeeding your furry pal without even realizing it. Giving it cat treats too often or administering highly caloric supplements can leave it with a feeling of being over-saturated.

What’s more, you could be overfeeding it by serving it more food than required. It’s only natural for most cats to stop eating if they are still full from the last meal they had, especially if they aren’t physically active or if said meal was too ample for them.

Overfeeding your cat can lead to obesity, as well as to numerous other physical and mental health-related problems.

Age plays a crucial factor in every cat’s eating habits. Kittens need to be fed several times a day, whereas their older counterparts must eat once on daily basis. Senior felines usually have troubles with loss of appetite, slowed down metabolism, indigestion and other similar problems, which can make them unwilling to eat.

On top of that, as time goes by, it’s actually normal for every kitty to get fed up with eating the same thing every day. If your cat has stopped eating the food you’ve been giving it over a long period of time, it’s just grown out of liking it.

Elder cats already have a lot to deal with – from impaired senses to worn out muscles and bones. If there’s also medical issue at hand, it’s possible for the kitty to not want to deal with the process of digesting food or drinking water.

Cats can experience a wide range of emotions much like us, human beings. Negative emotions like depression, stress and restlessness can cause loss of appetite.

Felines can also suffer from separation anxiety, especially young kittens or cats that have recently moved to a new home. It’s possible for your pet to refuse to even sniff its water and food bowls if it’s experiencing something traumatic on a mental level.

The most troubling causes for not drinking or eating are health-based problems. Toothaches, abscess, kidney failure, tapeworms, and other more severe diseases could result in loss of appetite.

Sometimes something as simple as a slowed down metabolism or an unexpected pregnancy could also affect your pet’s appetite. However, if there’s an undiagnosed disease at hand, which is causing the refusal to eat or drink, not knowing and not treating it could be potentially lethal to your kitty.

What To Do If Your Cat Is Refusing To Eat Or Drink?

Unlike us human beings, feline furballs can’t go on without food for too long. So, if your fluffy friend isn’t eating or drinking, try one of the following tips:

Focus On The Bowls

Deep clean the bowls. Make sure there are no leftovers from the detergent or any lingering smells. Separate the two bowls if necessary. Opt for switching from plastic to metal or silicon ones.

Also, try heating up the food, but don’t serve it hot.

Another idea is to change the food by carefully transitioning to the new food in order to avoid indigestion.

Lastly, use high quality cat food manufactured for your pet’s breed and age.

Opt For A Cat Water Fountain

You might not have seen it, but that doesn’t mean that your cat hasn’t tried drinking from your faucets. Change the water in the cat’s bowl at least once every day and opt for investing in a pet fountain.

Residing in a stress-free environment is of crucial importance for every single feline furball out there. Apart from loss of appetite, stress can lead to numerous other issues, such as exposure to feline herpes.

If needed, move the kitty to a new room and set up its cat furniture there. Make sure you’re spending quality bonding time with your pet on daily basis. If it’s suffering from separation anxiety, it will need comfort, love and some time to adjust to the new situation.

If you’ve tried most of the tips mentioned above and the cat keeps refusing to eat or drink for a couple of days in a row, it’s time to call the vet. Be as descriptive as possible regarding any recent changes in the kitty’s life and surroundings. Don’t forget to mention the methods you’ve tried in an attempt to fix the problem.

Your furball might not be eating/ drinking because of something as common as whimsicality or an unexpected pregnancy, but you should still take it to the vet. Don’t ever neglect its well-being. Cats have unique ways of showing us just how much they care, so don’t make the mistake of disregarding your pet’s needs.

3 thoughts on “Help! My Cat Won’t Eat Or Drink! What To Do When Kitty Refuses”