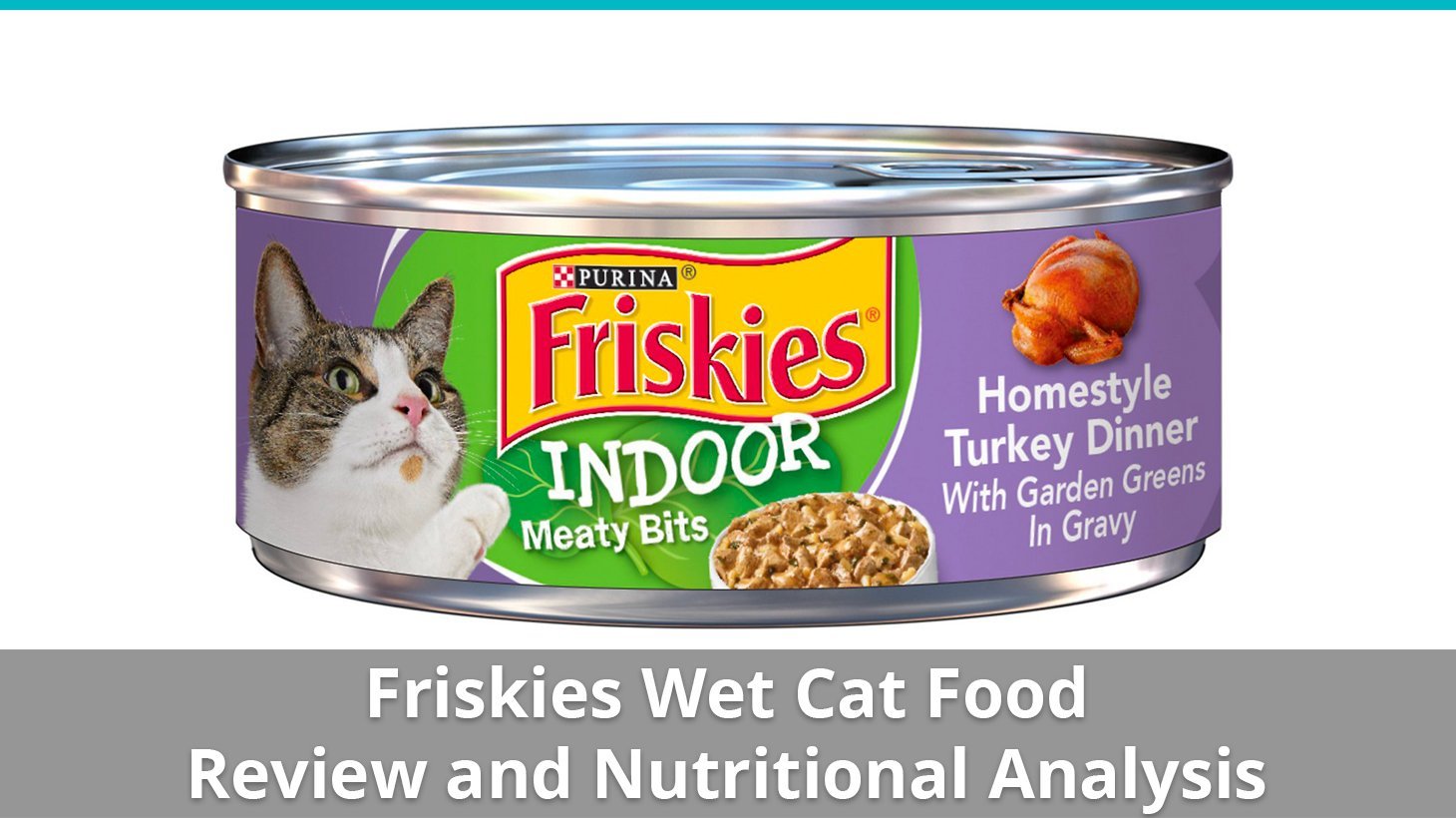 Tap Here To Choose One Of Our Top Rated, Best Cat Foods Instead

Friskies wet foods are very similar to each other, and we rate them all poorly.

While they market a variety of different wet foods, they are mostly the same, and none of them stand out enough to rate on their own.

Because we do not recommend any of them, and they all suffer from the same problems, we chose to group them all into this review.

Friskies has 11 wet product lines, which include 58 recipes/flavors.

Each recipe below includes its related AAFCO nutrient profile when available on the product’s official webpage or packaging: Growth (G), Maintenance (M), All Life Stages (A), Supplemental (S) or Unspecified (U).

The star rating is a rough average of all of the flavors in a single line of food. If an individual recipe scored lower or higher, we will mark that below, next to the flavor.

Friskies Indoor Homestyle Turkey was selected to represent the other products in the line for this review.

Ingredients in red are controversial or of questionable quality.

After water, the first ingredient in this cat food is turkey. Good.

While quality of the individual ingredient can vary, turkey is a very good protein source for cats.

It’s also important to note that turkey contains about 70% water, so when it is processed and cooked for use in cat food, it will become a smaller part of the total recipe.

According to Wikipedia, wheat gluten is “made by washing wheat flour dough with water until all the starch granules have been removed, leaving the sticky insoluble gluten as an elastic mass which is then cooked before being eaten.”

It’s a popular ingredient in a vegan diet, because you can use it to make a high-protein, meat-like food called seitan.

As an ingredient in a cat food, though, it misses the mark.

It is used to boost the crude protein numbers, without having to add more meat (meat is expensive for manufacturers).

It comes from a grain, and cats don’t eat grains in the wild. We believe this is not an appropriate ingredient.

Check out TruthAboutPetFood.com for more info on the subject.

The third ingredient is rice. Bad.

It may be slightly better than corn in some areas, but rice is simply not biologically appropriate for cats.

It is a filler ingredient.

Whether you consider the use of by-products as a good use of otherwise wasted animal matter, or you consider it a cheap, poor quality ingredient, there’s no arguing with the fact that an unnamed animal product is bad news.

According to AAFCO, meat by-products are “non-rendered, clean parts, other than meat, derived from slaughtered mammals. Includes, but not limited to lungs, spleen, kidneys, Brain, livers, blood, bone, partially defatted low temperature fatty tissue, and stomachs and intestines freed of their contents. It does not include hair, horns, teeth, and hoofs.”

Basically what this means is that anything left over on the carcass once the good, human-grade cuts of meat are removed, is thrown into a vat and processed.

Since it just says meat and not chicken or beef, you have no idea what’s in it.

The rules surrounding ingredient labeling on pet food allow for less than ideal animals to be used in pet food.

It is possible for these rendering plants to use “4-D” animals…Dead (from means other than slaughter), diseased, dying, or disabled.

This is a low quality ingredient.

The fifth ingredient is liver. OK, but with reservations.

Normally, liver is a fantastic ingredient.

It provides protein and a lot of important nutrients.

However, the meat source is not specified, and so we are left to wonder where exactly this liver comes from.

Not all animal meat is created equally when it comes to your cat’s diet, so you really want to know more about each ingredient than we are getting here.

This is the “outer coating of the corn kernel, with little or none of the starchy part of the germ”.

It is very high in carbohydrates and fiber, and contains some protein.

Corn is not a biologically appropriate food for cats.

The ingredient used is usually an inexpensive feed-grade corn. There are reports of it including moldy grains and fungus.

It’s not as digestible as meat, it’s not meat protein, which means it isn’t a complete protein that your cat needs, and it’s typically only included as a cheap filler.

The seventh ingredient is chicken. Good.

While quality of the individual ingredient can vary, chicken is a very good protein source for cats.

It’s also important to note that chicken contains about 70% water, so when it is processed and cooked for use in cat food, it will become a smaller part of the total recipe.

This recipe includes a number of other ingredients, but once you get down this far, none of them will be in large enough quantities to make a real difference, except for the added vitamins and minerals.

However, there are still a few things you should know.

Corn starch may be used to bind other ingredients in the food together, and contains pretty much only carbohydrates. It can be allergenic. Corn is not biologically appropriate, and most if not all corn ingredients are cheap fillers.

Soy flour is basically a by-by-by-product of soy beans. From the bean to soy protein meal to flakes to toasted and ground down soy flour.

Soy contains many anti-nutrients that inhibits your cat’s body from digesting nutrients from the other foods she eats.

Soy is a bad ingredient for cats, particularly soy manufactured in factories in the US, where soy bean protein is used to create other products, compared to Asia, where soy is typically fermented, which makes it much better for the body.

This recipe includes added color. There is no reason for a cat food to be colored, except to make it appeal to cat parents. Your cat does not care what color her food is.

Since it is 100% marketing gimmick, it is unnecessary, and usually the sign of a cheap cat food.

Many coloring options, such as caramel, are potential carcinogens, or otherwise potentially harmful for your cat.

To read a more in depth article about any of the ingredients listed here, check out our Cat Food Ingredient Wiki (currently under development).

From top to bottom, this is a far below average food.

It is mostly low quality, unnamed cuts of meat, corn, and other fillers.

The macronutrient profiles on most foods look OK with roughly 50% protein on a Dry Matter Basis. However, they all contain some unnecessary carbohydrates – and some contain a significant amount.

This is NOT a good example of a wet food you should be feeding your cat.

Even though much of it is from unnamed sources, meat still appears to be the main ingredient in most recipes, so we can assume that this is a mostly meat-based food, which is ideal for your carnivorous feline’s dietary needs.

But don’t let that fool you into thinking this is a good food.

This is a very cheap food, and for good reason.

Compared to the other 2000+ foods in our database, this food has:

Because meat is the first ingredient, but unnamed cuts of meat are used, and the whole recipe looks fairly inappropriate for a feline diet, our rating for this brand is 1.5 stars.

We do not believe that a recall indicates a low quality food or company, and we respect the fact that sometimes things happen that cause a manufacturer to recall a food.

Usually these things are non-life-threatening, and we think it’s important to take a moment to be thankful about just how few recalls there really are in the industry, considering the enormous volume of food produced.

However, we do believe that a history of recalls may point to a larger issue with a company, and that discerning consumers want to know who they’re buying from, especially when it comes to something as important as the food you feed your beloved cat.

Here is a list of recalls that have affected the Friskies brand in the past:

If you want to stay up to date on the latest recall information affecting your cat’s food, sign up to our email list and receive an email every time a recall is announced. We’ll also let you know about any updated ratings, recipe changes, or new cat foods on the market. (Our alert system will be launched shortly, check back soon.)

We recommend purchasing your pet products from Chewy.com. They continually prove that they walk the walk while talking the talk, and I’ve never dealt with a more dedicated pet-parent base of people than those who work at Chewy.

Plus, they offer 20% off and free shipping on lots of orders.

Check out our ratings and reviews of the best cat foods in our comprehensive, data-backed guide right here.

Tap Here To Choose One Of Our Top Rated, Best Cat Foods Instead

Catological has been featured on