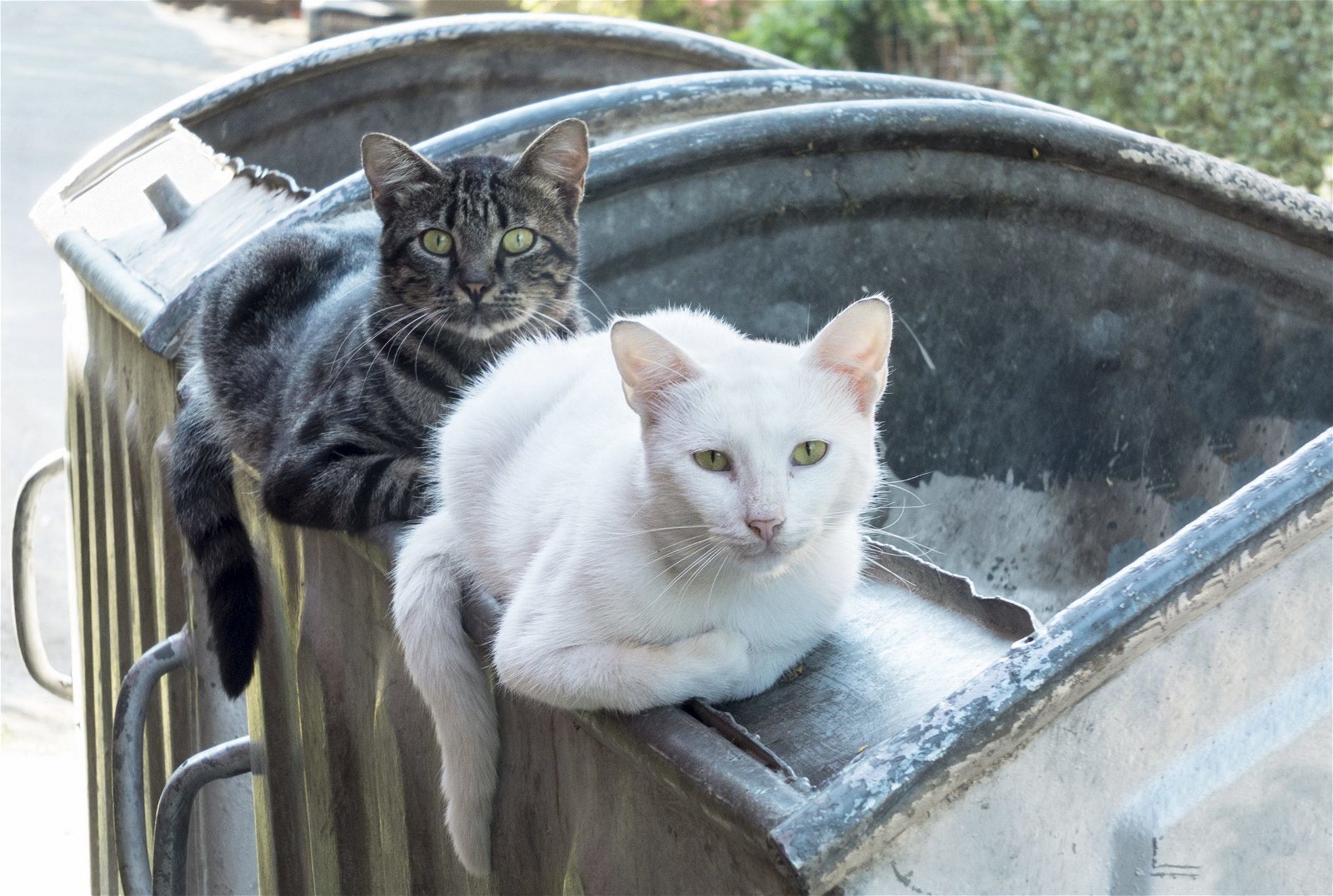 You spot them near a restaurant dumpster. They are crouched down, silent, and unmoving. They watch you, wide-eyed, preparing to dart away into the night.

What are they? Feral cats.

What are the characteristics of feral cats? How do these cats survive outside? What problems do they cause? Can they be tamed? Can you adopt one?

Here’s everything that you need to know about feral cats.

What is a Feral Cat?

A feral cat is an outdoor domestic cat that exhibits antisocial behavior from living a large amount of its life with minimal or no human contact.

Feral cats often live in groups called colonies. They share a territory and its food sources. They have a loose social order and will protect their area from strange cats.

Feral cats are not pests, but they’re not wildlife either. The vast majority of them rely on humans for their food sources and shelter, albeit often indirectly.

Even though people often use the terms interchangeably, ferals are not the same as strays.

While they are both outdoor domestic cats, they differ in behavior.

Feral cats exhibit wilder behavior, showing they have little to no trust in humans. Strays are cats that have escaped or been abandoned by their owners and still exhibit human-socialized behavior.

If strays live on their own for long periods, they often become feral.

You can often tell the difference between ferals and strays by the traits they display.

Strays will have qualities similar to house cats such as

Alleycat provides an excellent breakdown of feral vs. stray characteristics. I highly recommend checking it out.

How Long Do Feral Cats Live?

Feral cats can live as many as ten years or more if they have a well-established colony and a good source of food. Feral cats living on their own rarely survive for more than two years, according to the ASPCA.

We often think of cats as being solitary animals, but in fact, they depend on a social group. For house cats, this group is people. For ferals, this group can be other cats or people.

So cats that live in groups tend to live longer. The group helps watch out for predators, find food, and protect against the elements.

Where Do Feral Cats Live?

Feral cats generally live in colonies, which are usually groups of related cats, according to the Humane Society.

Because they are people-shy but often rely on a human-based food source, they choose places to live where people don’t frequent but are near human establishments.

It is surprising how many neighborhoods in the United States sustain a feral cat colony. Feral cat colonies are common across the country, but their primary concentration is in urban areas.

What Do Feral Cats Eat?

Feral cats are opportunistic. Their diets vary dramatically by what is available to their community.

Cats that live near the water may eat a lot of fish heads and other debris from fishing activities.

Cats that live in rural areas around livestock depend mainly on pests like mice and rats. City cats often get most of their food from dumpsters.

Here are a few of the most common food sources for feral cats.

Dumpsters, garbage cans, and other sources of human waste are a primary food source for many feral cats.

To the dismay of home-owners, ferals often make a mess out of neighborhood garbage cans.

As you can imagine, this can be dangerous for cats as well as they may end up eating things that aren’t good for them.

Cats are natural hunters, and given the opportunity, they will stalk and capture prey.

As a rule, cats are ambush predators. They like to wait for their prey to move into range and then leap on it.

Cats will eat any animal significantly smaller than themselves that they can catch, including rodents, birds, insects, etc.

Many feral cats are part of community cat colonies that are cared for by Good Samaritans in the community.

Feral cats may never interact with these people, but they know when food goes out and will come at the right time to get their portion.

Furthermore, they come into contact with lots of wildlife and other cats, which increases the likelihood of contracting a disease.

A study on 96 feral cats in Canada revealed the following diseases and pathogens in feral cats.

These red cell pathogens can cause severe anemia, which severely weakens feral cats. This effect can result in death either directly or by making them more vulnerable to predation.

The study tested for three types of these pathogens and found that 11.5 % of cats tested positive.

This organism is a parasite that cats obtain by eating infected rodents, birds, small animals, and even items that have been in contact with the feces from other infected cats.

This parasite causes toxoplasmosis in the cat. Typical symptoms include fever, lethargy, and loss of appetite and can lead to more significant problems such as pneumonia.

This pathogen is transmittable to people. People are most likely to become infected with this pathogen if they come into contact with cat feces or contaminated water.

The study found that 29.8% of feral cats were exposed to this pathogen.

This pathogen may or may not result in clinical disease in feral cats.

Fleas are the leading carrier when it comes to cats. The pathogen also spreads to humans via fleas or when an infected cat scratches or bites a person.

2.1% of cats tested positive for this pathogen.

These viruses can affect any cat, although outdoor male cats are most likely to contract the Tpathogen.

It also increases their likelihood of the cat contracting another infectious disease.

8.3% of the cats carried a form of one of these viruses.

Despite arguments to the contrary, evidence continues to mount concerning the devastating effect of feral cats on birds.

According to a nature.com review of various studies on the effect of cats on birds and other wildlife, their “estimate of bird mortality far exceeds any previously estimated US figure for cats.

Per their estimates, 1.324 billion birds and 6.32 22.3 billion mammals are killed by cats in the US annually. Unowned feral cats contribute to the majority of these mortality rates.

Pete Marra, the head of the Smithsonian migratory bird center and author of the book Cat Wars, claims outdoor cats are the leading human-influenced cause of dying birds.

There are those, whoever, that think the problem isn’t as bad as it seems. According to Alleycat.org, when cats hunt, which isn’t as often as most people think, their primary prey is rodents and insects, not birds.

While it may be true that birds are not a substantial dietary staple for the majority of feral cats, the fact remains that cats are active predators who kill a significant number of birds in our communities.

These programs are more humane than other ways of handling community cats, which included mass euthanasia or relocation. Such methods result in cats dying from predation or starvation.

Here are a few of the reasons why TNR programs are preferred to catch and adopt programs.

TNR programs aim to capture feral cats, neuter or spay them so that they cannot create more feral cats. Cats in the program are returned to the area where they were trapped to live out their lives.

When these cats are released, they are given a visual marker, indicating the cat has been spayed or neutered. This marker is usually an ear with the tip clipped off.

Community cat populations are managed by volunteers who look out for the welfare of community cats, feed them, and trap them as necessary.

Check out the Humane Society if you want to get involved in helping with TNR.

Hopefully, in time these efforts will eliminate feral cat populations without having to resort to mass euthanasia.

It is arguable whether it is possible to tame a feral cat. Alleycat.org states that a feral cat will never be comfortable indoors. Kittens, older than a few months, will most likely never develop the domestication of a typical housecat.

While they may acclimate to humans and allow themselves to be touched, they may never be truly trusting. That said, people do adopt feral cats every day.

If you are considering adopting a feral cat, here are a few things to keep in mind.

A feral cat who has never built up trust with you, suddenly put inside your home, will most likely panic.

If you want to adopt a feral cat from a shelter, it is best to keep them in a designated room and carefully control their exposure and interactions, gradually building trust.

If a cat has lived its entire life without human contact, especially if it comes from several generations of such cats, it will never behave like a typical housecat.

You can expect the cat to be shy, especially of strangers. They will startle more easily at slight noises, and they have an undying fascination with the outdoors and escape.

Feral Cats and Other Pets

It is doubtful that a feral cat that has lived in a colony will get along with your other pet cats.

Feral cat communities are often related. So they’ve been with their ‘family’ a long time.

When you put a feral cat into your community of unrelated cats, the results are often predictably disastrous.

Keep in mind that if a feral cat gets into a fight with your cat, the chances are good that the feral cat will be the one to cause the most damage, as most feral cats have been in a fight or two at some point in their lives.

And when it comes to dogs… As a rule, dogs are generally nothing other than enemies to feral cats. And despite how good-natured your dog is, it is unlikely that your feral cat will ever accept him.

It will take you a long time to win over the trust of a feral cat. You can expect to invest as many as 40 or 50 hours just to make contact. And some cats will never be won over no matter how much effort you put in.

It can be very frustrating and discouraging to spend so much time trying to win the affection of an animal who seems to want nothing to do with you. Think carefully about whether you are willing to commit to taming a feral cat.

How To Tame a Feral Cat

Here is a set of steps to winning over a feral cat who you have seen around your home or business. Again, these will have varying degrees of success, depending on the cat.