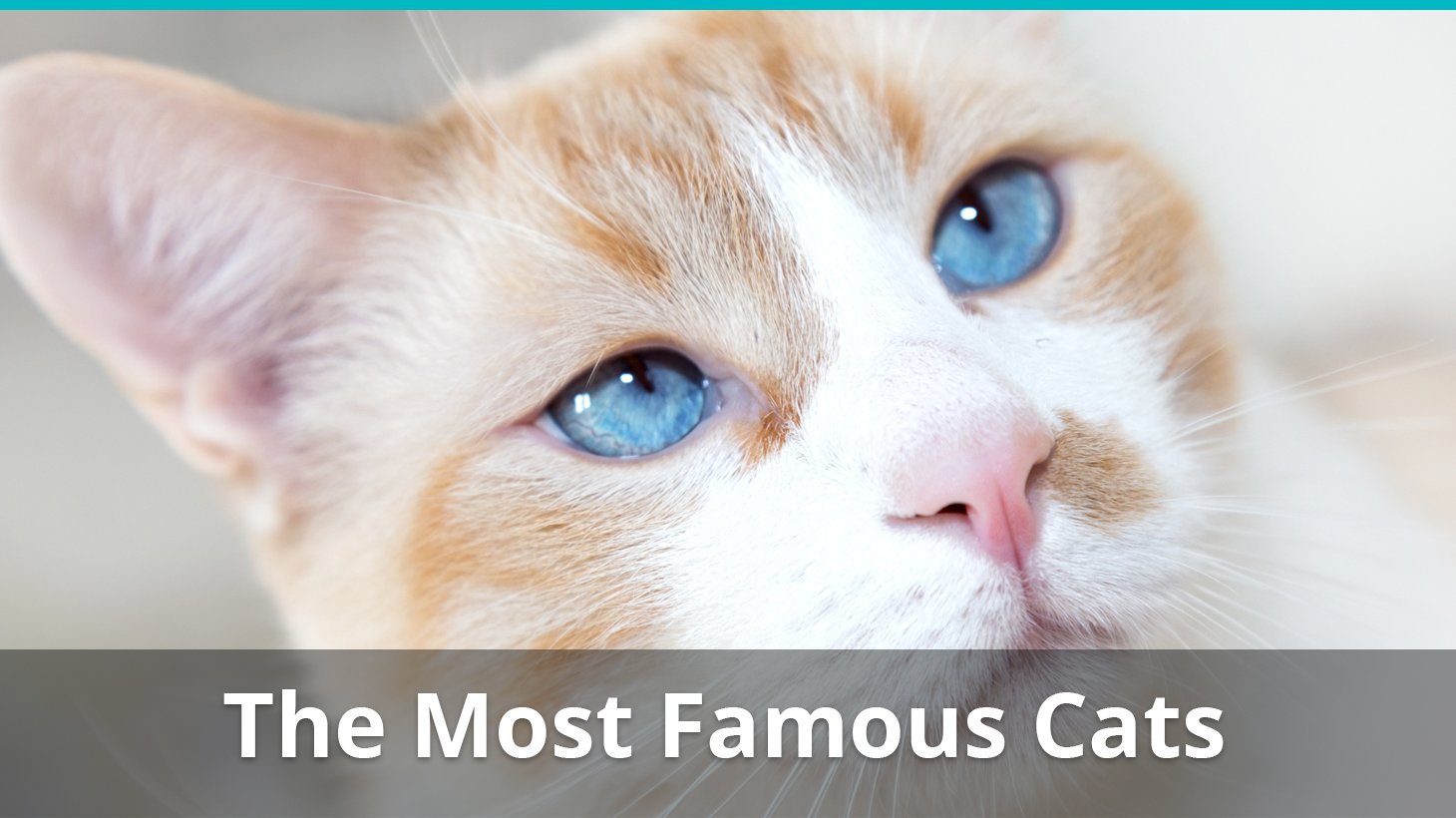 Even if you’re not a big cat lover, you’re probably here because you’re eager to find out something about the most famous cats in the world. We can guarantee you won’t be disappointed!

Are you ready? Let’s start with some adorable fictional characters.

The Most Famous Fictional Cat Characters

We’ve prepared a long selection of the most well-known fictional feline creatures from movies, books, and even comics.

Who doesn’t know the mischievous Thomas from Tom & Jerry? Tom is probably one of the most loved villains of all times. He often gets defeated and outsmarted by the tiny mouse, but he never gives up. A little-known fact is that Tom has been around since 1940. He actually made his very first appearance in 1940’s Puss Gets The Boot.

Puss in Boots (Hundreds Of Years Of Tales…and Shrek)

The Booted Cat, the Master Cat, or simply the Puss in Boots, is a notorious fictional character dating back to 1550’s fairy tales. This particular kitty cat has received tons of attention in re-told fairy tales and in various movies. Some of the Puss’ most famous appearances are in Disney’s 1922 black-and-white movie, in the Shrek animations, in Tchaikovsky’s Sleeping Beauty ballet, and in DreamWorks’ 2011 Puss in Boots.

Speaking of numerous adaptations, here comes Garfield. The egoistic, lasagna-loving orange tomcat appeared for the very first time in a comic strip in 1978. He has also graced video games, animated TV series, and a total of five movies! Witty, lazy, and extremely adorable, this orange fellow is often perceived as the original grumpy cat before Grumpy Cat (named Tardar Sauce in real life) was ever famous.

While we’re on the subject of famous grumpy cats, do you remember Crookshanks? He was not a villain (Ron Weasley might say otherwise!), but he was the most popular cat in Harry Potter. In the books and movies’ diverse abundance of magical creatures Crookshanks was a simple, ordinary ginger Himalayan cat. And while he was extremely intelligent, he was, indeed, always looking grumpy.

The Cheshire Cat (Alice In Wonderland)

Enough with the grumpiness. Let’s focus on some positivity. And what’s more positive than the Cheshire Cat’s iconic smile? Well, it wasn’t exactly positive 100% of the time, but it was the last thing that always remained visible all those times when the Cheshire Cat’s body disappeared in the book and the movies from the Alice in Wonderland universe. Here’s a fun fact – the famous Cheshire Cat also appears in Radiohead, Taylor Swift, and Blink 182’s music.

Sylvester is among the most famous Looney Tunes characters. Much like Thomas from Tom & Jerry, this guy has become an iconic figure in pop culture. Sylvester is the proud winner of not one, not two, but a total of three Academy Awards! Furthermore, this mischievous tuxedo cat was also featured among TV Guide’s official list of the top 50 best cartoon characters.

Nope, we’re not talking about the politician. Winston Churchill, often called by his nickname Church, was one of the main antagonists in Stephen King’s popular horror novel Pet Semetary and its movie adaptations. Of all the British Shorthair cats in the world, Church has to be the scariest of them all!

The Most Famous Cats In Real Life

All right, so now that we took on you on a trip down memory lane and you’ve refreshed your memories of Stephen King and Tom and Jerry, it’s time to focus on some of the most famous feline furballs in real life.

Tardar is the original Grumpy Cat and she rose to stardom after appearing on Reddit back in 2012. Ever since then she has graced countless memes, photos with Dennis Crowley and Ian Somerhalder, and editions of ABC News’ Good Morning America, CBS’ Evening News, VH1’s Big Morning Buzz Live, and so forth. Oh, and she also won a sponsorship with Friskies.

While Doctor Grey and Detective Benson are fictional characters, they inspired the names of Taylor Swift’s famous domestic cats. The pop singer’s own fame often reflects on her cats as she’s constantly traveling with them and sharing their pictures on social media. Meredith Grey and Olivia Benson are two Scottish Folds. They are so adorable that Swift herself admitted that she prefers hanging around with them instead of going to after parties.

Choupette is the notorious white Birman feline pet of Chanel’s CEO Karl Lagerfeld. She has her own Twitter and Instagram accounts, her own personal maid, and her own feeding table set next to Lagerfeld’s. The snow-white kitty was reportedly the inspiration behind Lagerfeld’s Spring 2012 Couture collection. And, of course, she’s a famous figure in the fashion world’s echelons.

The Italian tomcat named Tommaso may not be the most famous cat in the world, but he’s definitely the richest. While Choupette isn’t short on money and luxury, she still doesn’t have what Tommaso has. Back in 2011 the tomcat’s owner, Maria Assunta, left him as the only heir of her $13 million will! This little feral millionaire was once adopted by his former owner from the streets of Rome and his love and affection for her definitely paid off!

Colonel Meow holds the Guinness World Record for the longest cat fur. He was a Himalayan-Persian mixture who had an impressive fur length of nine inches! Unfortunately, Colonel Meow’s 15 minutes of fame were cut short as the kitty passed away in early 2014 at the age of two due to severe heart problems. Nevertheless, even today he still remains one of the most famous cats in the world.