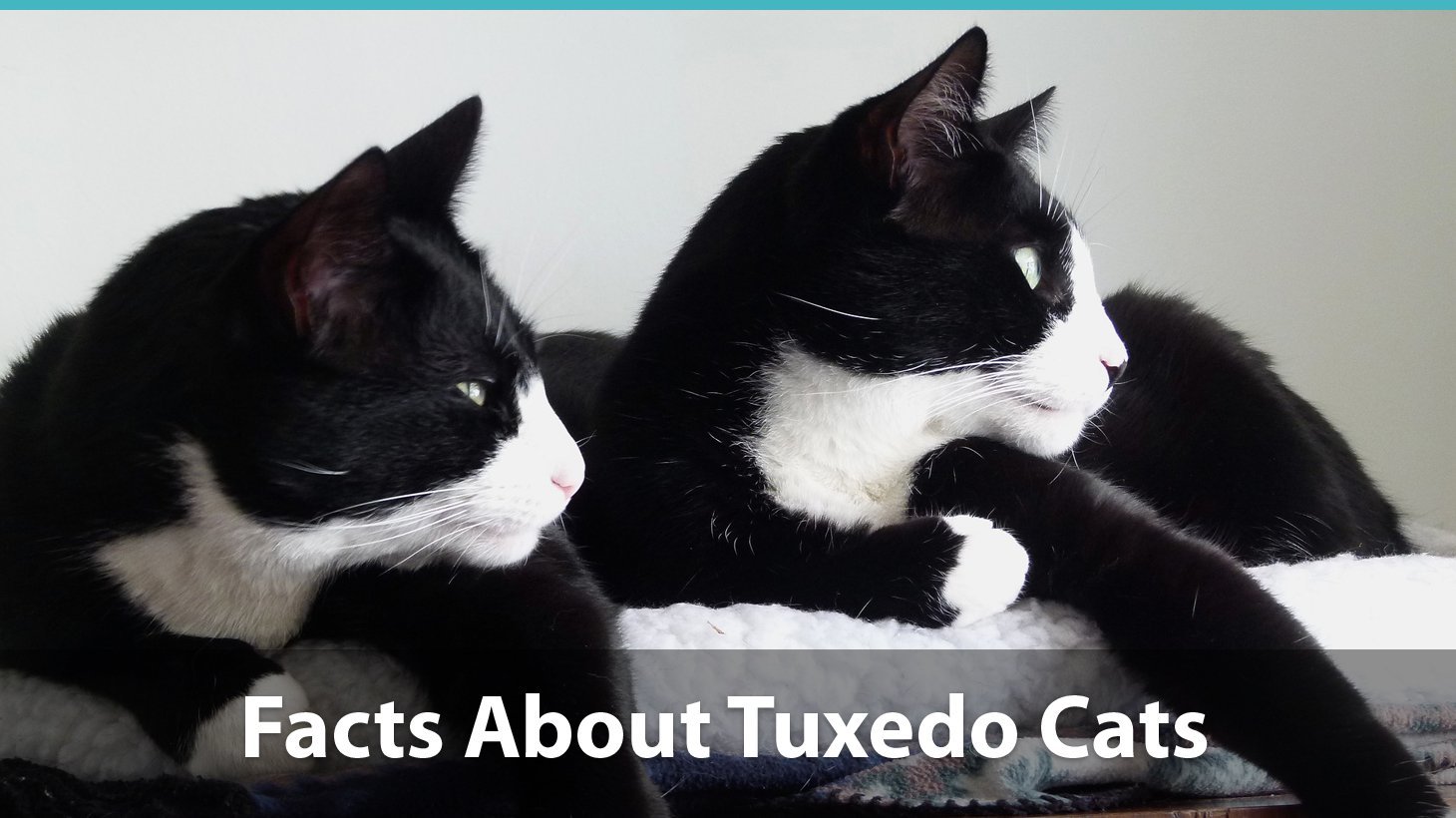 You’ve probably seen them before and you’ve probably even wanted one just because it looked unique compared to every other kitten out there.

Famous in real life, pop culture and fiction, desired by many for their signature looks, and grabbing the attention of everyone in the room, Tuxedos have been around for thousands of years.

Curiously enough, even though they’re so widespread and famous, nobody knows their true origins.

Today I want to talk about some well-known and some little-known Tuxedo cat facts and the mysteries surrounding these gorgeous creatures.

Below you’ll find information about the Tuxies’ physical appearances, price tag, notable moments in history and the answer to the ultimate question – if they’re widespread across the globe, why can’t you easily find one?

Are you ready? These awesome Tuxedo cat facts will make you crave for a pet Tuxie kitten – as if these cute feline furballs weren’t appealing enough already!

Some of these facts may surprise you while others may even seem shocking. Either way, Tuxies are deserving of the spotlights.

Tuxedo Is Not A Breed

Let’s start with the most important fact about Tuxedo cats. Tuxedo is not an actual feline breed, it’s just a term that describes a type of cat fur pattern. The official name for Tuxedos is actually “bi-color cats”.

Many breeds can produce Tuxedo kittens.

Some of the most notable ones are Maine Coons, Turkish Vans, British Shorthairs, and American Shorthairs.

The name comes from the popular formal wear as it resembles a black and white tuxedo suit. As such, Tuxedo kitties are often perceived as the gentlemen of all cat colors and patterns due to their sophisticated and elegant looks.

In some parts of the world, Tuxies are called Piebald cats, Felix cats or Mask-And-Mantle cats, although the latter one is a different type of pattern.

It’s The White Color That Counts

What’s curious about Tuxies is that the black color doesn’t play a factor in their distinctive pattern. It’s the white spotting genes that make these kitties so unique.

The white genes can be recessive or dominant. They are the ones that give Tuxedos their formal attire looks because they dominate over the black color genes.

Fortunately, these white color genes are inherited by males and females alike.

In other words, there are just as many female Tuxies as there are males, which is the opposite of the case with Calico and Tortoiseshell kittens. And unlike Torties and Calicos, male Tuxedos are usually not sterile.

There Are Different Types Of Tuxedo Cats

Even though some markings form the typical Tuxedo look (white chest and black body), there are different types of Tuxies.

You can see Tuxedos with white paws, chins, tails, and socks or mittens. And some of these kitties even have black spots on their necks that give off the impression that they’re wearing a bowtie.

Moreover, there are different coat color combinations when it comes to Tuxies. The black and white markings can also be tabby, blue/ grey and even orange. Some Tuxedo kitties may even have pink socks. 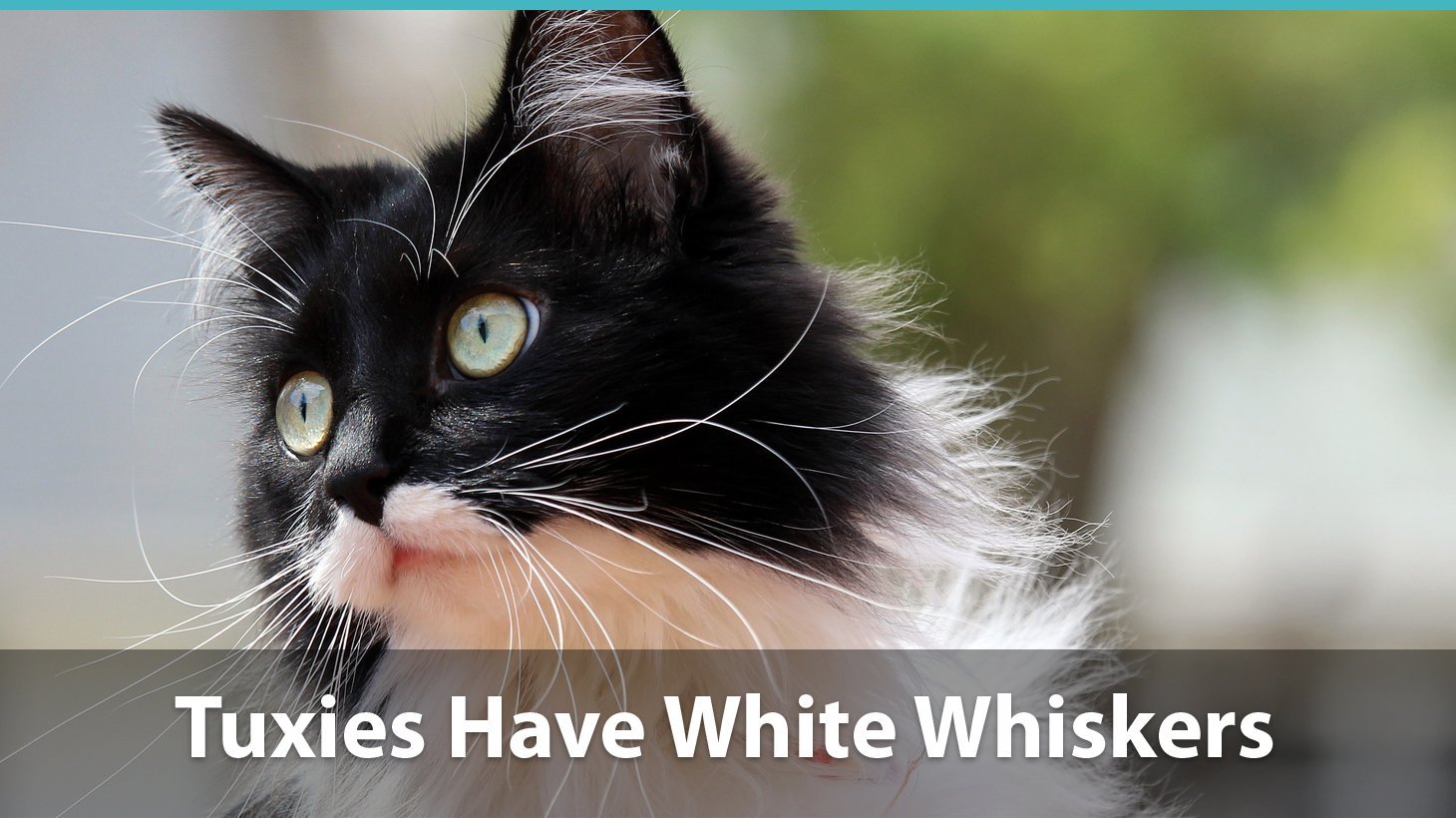 Most Tuxedo Cats Have White Whiskers

A funny fact about Tuxedo cats is that these furballs almost always have white whiskers instead of dark ones. That’s not the case with all Tuxies, but most of them have this signature physical trait.

They Have Green Or Yellow Eyes

Even though Tuxedo cats can be found among a variety of feline breeds, their eye colors aren’t that varied. According to official standards set by major cat organizations, the true Tuxies can have green, gold or yellow eyes.

Tuxies are undeniably adorable and can come from purebred kitties, as well as from mix-bred feral cats. However, that doesn’t mean everyone wants to run out and adopt one.

Tuxedo cats are among the least-adopted cats in shelters across the country, according to a Priceonomics study. They say it’s below 70%, which they call “unusually low”.

Even A Single Tuxedo Cat Can Pass The Tuxedo Genes Successfully

While the Tuxedo pattern is quite specific, it doesn’t take two Tuxie parents to make a new Tuxie kitten.

Even if one of the parents has the Tuxedo pattern, it can successfully pass it on to one or more kittens.

Furthermore, a Tuxedo kitten can be born even if neither of its parents is a Tuxedo. It just needs to inherit black and white genes. Nature and chance will do the rest.

You Can Find Tuxedo Cats All Over The Globe

These kitties can be easily found in shelters in the US, but they’re also common all around the world.

Their Reputation Precedes Them

This fact shouldn’t be surprising. The Tuxies’ reputation precedes them.

It’s believed these furballs are sophisticated, intelligent, are susceptible to training, and have a mind of their own.

Of course, not all Tuxedo cats are like that. Whether the notorious “tuxitude” is a real thing and whether the kitty’s personality matches its looks, that depends on the breed, the pet parent and the cat’s upbringing.

Because Tuxies can come from different cat breeds, there are no known health concerns, which can be applied to all Tuxedo cats.

Furthermore, unlike Albino cats, these creatures don’t have any fur-specific health conditions that owners should be looking for. And that’s just yet another reason why Tuxies are so awesome and desired by cat owners all over the world.

How Much Do Tuxedo Cats And Kittens Cost? Price Analysis And Buying Guide

If you’re looking to buy or adopt a Tuxedo cat or kitten, you’re probably wondering if that will cost you a small fortune. Fortunately, that’s not the case.

If you want a pet quality Tuxie, you don’t have to splatter thousands, but make sure the kitten you choose is healthy.

Pro buying guide tip: opt for getting a Tuxedo kitten from friends or relatives who have black and white cats. Chances are they’ll produce a black and white kitten with the Tuxedo pattern. Or, adopt from a local shelter. 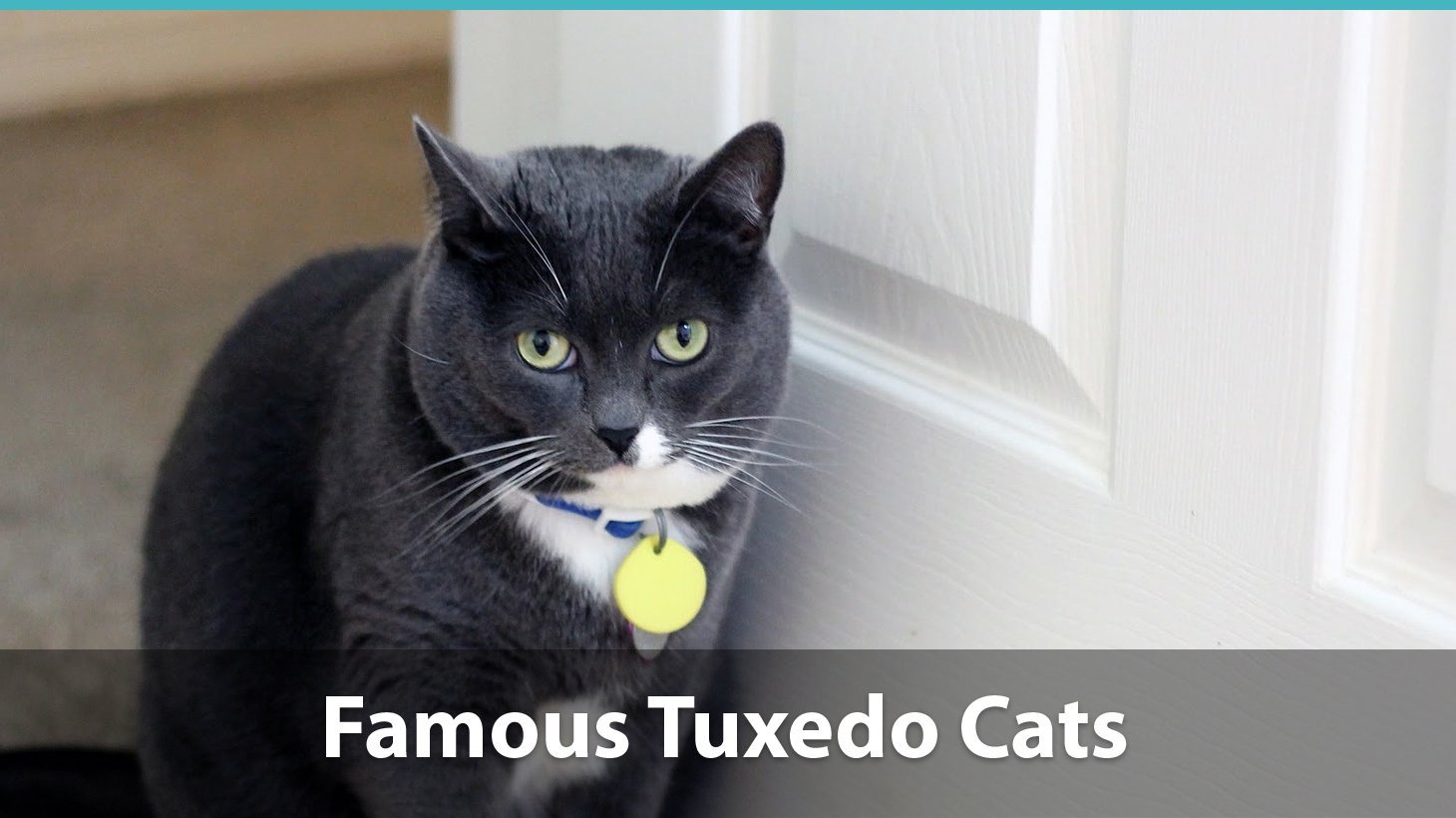 Did you know that Tuxedo cats are famous? No? Well, they are. Tuxedos are attention-grabbers everywhere they go and they’re quite famous in books, movies, TV, music and even in real life.

Even if you’ve never been a fan of Tom and Jerry (is that even possible?) you know what Tom looks like and who he is. Since the early 1940s, Tom has been a lovable character for people all over the world. But what you probably never realized is that Tom is a Tuxedo cat.

Yes, he’s not a typical black-and-white Tuxedo kitty and that’s probably why many people never perceive him as one. Nevertheless, his patterns still count. It’s kind of ironic actually, because he is, in fact, the most famous Tuxedo cat on the planet!

Another popular cartoon character, whose name has grown to become one of the most popular male cat names, is Sylvester. Similarly to Tom, Sylvester has been gracing the screens of numerous generations ever since the first half of the 20th century.

And again similarly to Tom, Sylvester is also a Tuxedo furball. Unlike the former one, though, Sylvester is sporting the more traditional black and white bicolor dat combination.

While I’m still on the subject of cartoon characters, here’s another one of Looney Tunes’ well-known feline furballs – Penelope Pussycat.

Penelope is a typical Tuxedo cat. Unlike real-life Tuxedos, she’s not exactly portrayed as extremely sophisticated and unique, but rather unfortunate. She’s often chased down by the lovelorn skunk Pepe because he mistakes her for a female skunk thanks to her Tuxedo patterns.

Palmerston is a famous real-life Tuxedo kitty that leads a royal-like life.

He’s the true incarnation of the phrase “rags to riches” because he used to reside in a London-based animal shelter. But now he lives in the Foreign & Commonwealth Office in Whitehall, London. The kitty is serving there as a Chief Mouser and has made numerous appearances in the news.

Another popular male cat name is also the name of yet another popular cartoon Tuxedo cat. Felix is the cute fictional character, which Purina uses as a mascot for their cat food series. He’s a mischievous and adorable classic black and white Tuxedo kitty.

Here’s another real-life Tuxedo cat, which was quite popular because it also lived a life similar to Palmerston’s. He was the pet cat of the former US President Bill Clinton while he was serving office. Socks resided in the White House, but he wasn’t born there.

Similarly to Palmerston, Socks was an adopted stray kitty. He served as the First Cat of the United States between 1993 and 2001. Socks is proof that Tuxedo cats can have impressively long lifespans as he died at the age of 19-20 back in February 2009.

If you’ve never seen the musical Cats, one of its popular characters is called Mr. Mistoffelees and he has one of the most difficult choreographic roles in the entire show.

The character’s costume is one of a traditional black and white Tuxedo. In the original poem that inspired the musical, he’s a solid black cat, but the musical portrays him as a Tuxedo for visual purposes since a solid black costume wouldn’t make the actor stand out.

One of the richest cats in history (probably even the richest one) was allegedly a Tuxedo cat named Sparky. According to some rumors, this kitty received a fancy inheritance of more than $6 million back in 1998.

Another one of Disney’s famous feline characters is Figaro, who is also a black and white Tuxedo kitten. He gained popularity through his appearance in the animations based on the story of Pinocchio.

Tuxedo Stan was a Canadian-based kitty who ran for the Mayor’s office in Halifax, Nova Scotia. Of course, the feline didn’t get to serve as Mayor. Nevertheless, he managed to make a huge difference.

During his run for the office, Stan (or rather his pet parents) used his newfound fame to do some good. They founded a cat welfare society, the Tuxedo Party of Canada, to raise awareness of the feral cat problem.

Moreover, Tuxedo Stan influenced the city of Halifax to donate the whopping $40,000 to the local SPCA. Thanks to that, the SPCA was able to open a clinic for low-cost spaying/ neutering procedures.

Another real-life Tuxedo hero is Simon. Simon was a Tuxedo kitty who served as a guard on board of the HMS Amethyst during the Chinese Civil War. He guarded the food against rodents, thus saving the lives of all people on board.

Simon was awarded the PDSA Dickin Medal, which is an equivalent of the prestigious Victoria Cross. The kitty passed away prematurely from an injury and was buried with honors.

According to various legends, William Shakespeare, Sir Isaac Newton, and Ludwig Van Beethoven had Tuxedo cats as pets. Whether that’s true or not, we’ll never know for sure. But it still sounds cool, doesn’t it?

Unarguably, Tuxedos are among the most eye-catching and adorable kitties out there. Their signature patterns make them the center of attention wherever they go. A

nd whether they’re sophisticated and obedient, clumsy and clingy or simply aloof, their gorgeous looks are undeniably a reason enough for many cat owners to prefer them next to kitties with other fur patterns.