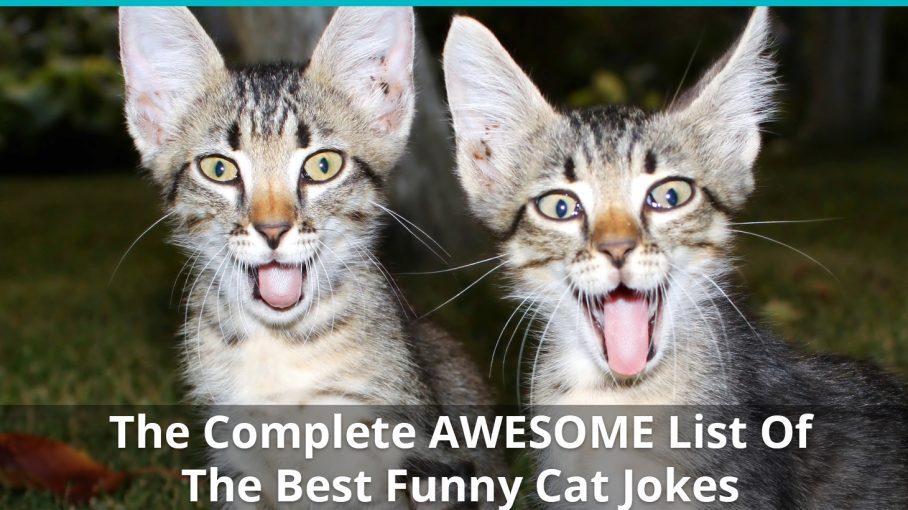 The Complete AWESOME List Of The Best Funny Cat Jokes

If you didn’t already know that, just spend 5 minutes on Youtube. Or 30 minutes. Or…all day. Not that I’ve ever done that…

But what about cat jokes? You’ve undoubtedly seen thousands of cat puns all over the Internet. We won’t cover the basic ones here. Instead, we’ve compiled a complete list of awesome cat jokes. That’s right! We have the longest list of the best cat jokes you’ll ever find. Just keep reading. We dare you not to laugh!

Why don’t cats play poker in the jungle? Too many cheetahs.

What is a cat’s way of keeping law & order? Claw Enforcement.

Where is one place that your cat can sit, but you can’t? Your lap. (Source)

My kitten was having trouble watching her Blu-Ray. Turns out she just had the movie on paws.

Why are cats so good at video games? Because they have nine lives.

Your cat is so fat that when it tried to chase the laser pointer, it caused an earthquake. (Source)

What is the difference between a cat and a comma? One has the paws before the claws and the other has the clause before the pause. (Source)

What did the cat say when the mouse got away? You’ve got to be kitten me!

What do cats say when they get hurt? Me-OW!

What do you call a kitten drinking lemonade? A “sourpuss.”

What is smarter than a talking cat? A spelling bee. (Source)

If Chuck Norris was a cat, he would have ten lives. (Source)

If someone from the 1950s suddenly appeared, what would be the most difficult thing to explain about life today? One answer: “I possess a device in my pocket that is capable of accessing the entirety of information known to man. I use it to look at pictures of cats and get into arguments with strangers.”

They make cat food out of cow, fish, turkey, chicken, and lamb meat—but not mouse meat, which is probably all cats want. (Source)

Why are cats better than babies? Because you only have to change a litter box once a day.

What is the first thing a cat does in the morning? It wakes up. What is the second thing it does after waking up? It goes back to sleep. (Source)

How do you know if an Asian robbed you? The homework is done and the cat is gone. (Source)

How to give a cat a pill

It’s Claw Enforcement. You have the right to remain silent. Anything you say or do may be used against you in a court of meow.

Neil down and pat the cat before he loses his temper!

Claws the door, I’m getting cold!

2 cats were looking into a green canary’s cage. The first cat said to the second cat, “That’s not a canary. It’s green!”

The second cat said, “I don’t know, maybe it’s not ripe yet!”

There’s this man, he walks up to this lady’s door. The lady answers it. The man says, “I’m terribly sorry. I just ran over your cat. I’d like to replace it.” Then the woman says, “How good are you at catching mice?” (Source)

A Chinese student is looking for an inexpensive room to rent. He finds one, but the owner warns him, “Yes, you can have the room. But we have a dog and two cats. I hope you like them.” “No problem,” beams the student, “I’m happy to eat anything!” (Source)

A policeman in the big city stops a man in a car with a Siberian Lynx in the front seat. “What are you doing with that Siberian Lynx?” he exclaims. “You should take it to the zoo.” The following week, the same policeman sees the same man with the cat again in the front seat, with both of them wearing sunglasses. The policeman pulls him over. “I thought you were going to take that cat to the zoo!” The man replied, “I did. We had such a good time we are going to the beach this weekend!”

It was Christmas Eve. A poor old lady was sitting alone except for her cat, in her tiny house, in front of a small fire. Suddenly, there was a flash of light, and the old woman’s good fairy appeared in the room. The old woman was astonished, but the fairy reassured her: “Don’t be afraid! I am your good fairy. You are very poor, and all alone at Christmas, so I have come to grant you three wishes, to cheer you up.” The old woman was about to speak, but the fairy held up her hand. “Wait!” she said. “Before you make a wish, think carefully! You will get exactly what you wish for, and no wish can be undone!” So the old woman sat silently, staring at the fire and thinking. Eventually, she spoke. “First,” she said, “I want to be very, very wealthy.” Poof! Immediately, the tiny house was packed with pots full of gold coins and sacks of bank-notes. There was more money than anyone could spend in an entire lifetime. The old woman looked around and smiled. She thought some more, and spoke again: “Next,” she said, “I want to be young and beautiful again, like I was when I was 18.” Poof! The old woman disappeared. In her place sat a beautiful young woman, with smooth white skin and long golden hair. The woman looked at her hands and arms, felt her hair, and smiled. “Third,” she said to the fairy, “I want you to change my cat into a handsome young prince, who will love me and take care of me all my life!” Poof! The fairy disappeared, and the cat leaped up from his place by the fire as a handsome young prince. He reached out to the woman, pulled her to her feet, embraced her, and kissed her passionately. Then he gazed into her eyes and said: “Hah! Now you’re really going to be sorry that you took me to the vet!”

A mother mouse and a baby mouse are walking along when suddenly a cat attacks them. The mother mouse shouts “BARK!” and the cat runs away. “See?” the mother mouse says to her baby. “Now do you see why it’s important to learn a foreign language?” (Source)

A couple was going out for the evening. They got ready – showered, all dressed up, put the cat out, etc. The taxi arrived but as the couple left the house, the cat shot back in. They didn’t want the cat shut in the house on its own while they were out, so the wife went out to the taxi while the husband went back inside and followed the cat upstairs to chase it out. The wife didn’t want the taxi driver to know the house would be empty, so she told him, “My husband’s just going upstairs to say goodbye to my mother.” A few minutes later, the husband came out and got into the cab saying, “Sorry I took so long, the stupid old thing was hiding under the bed and I had to poke her with a coat hanger to get her to come out.”

A tomcat and a tabby cat were courting on a back fence one evening. The tom leaned over to the tabby with pent-up passion and purred, “I’d die for you!” The tabby gazed at him from under lowered eyelids and asked, “How many times?” (Source)

Two female cats are sitting on the fence passing the time of day when a  handsome tomcat walks by and winks at them. “Oh darling, did you see that one?” one of the felines opines. “I wouldn’t mind sharing a dead mouse with him.” “Oh, forget about him,” her friend tells her. “I went out with him once, and all he did was talk about his operation.”

Now I lay me down to sleep,
I pray this cushy life to keep.
I pray for toys that look like mice,
And sofa cushions, soft and nice.
I pray for gourmet kitty snacks,
And someone nice to scratch my back,
For windowsills all warm and bright,
For shadows to explore at night.
I pray I’ll always stay real cool
And keep the secret feline rule
To never tell a human that
The world is really ruled by cats!

A cow says to a small kitten, “Look at you, so small and already such long facial hair.” The kitten cooly replies, “Yeah, look at you, so big but still no bra.”

A cat meets a fox in the forest. The fox asks the cat why she smells so dreadful. The cat replies, “I was walking by a pooping bear and he asked me if my fur makes fuzz. I said no. So he wiped his butt with me.” The fox wonders, “So how come you’re still in such a good mood?” “Well,” the cat replies, “When he was done with me, he asked the hedgehog.” (Source)

In the year 3000, animals rule the Earth; they talk and drive sports cars. An owl enters a psychologist’s office. The psychologist says to the owl, “What is your problem?” The owl replies, “I always sleep at night and am awake during the day. I am an owl, and we usually are awake during the night.” The psychologist tells the owl to come back in two days to solve his problem as he is very busy. The next night, a cat comes in. He says, “I always sleep during the day. Like my friends, I want to sleep during the night. Can you help?” The psychologist advises the cat to come back in one day as he is very busy. The next day, the cat comes very, very, very early for his appointment and ends up at the same time as the owl. The cat is told to wait outside. He peeks in the owl’s appointment and figures out his problem … and his address! The next evening, when the owl usually comes in for his appointment, the cat comes in. The psychologist asks the cat why he is here instead of the owl. The cat replies, “He is here!” and poops on the floor, explaining, “I was sent to deliver him.” (Source)

what do you recommend for the best foods for young cats 3yrs+ to sustain a long life???? Brand name Foods???

Hi Matthew – Check out our huge article on the best cat foods here.

These jokes are really good.
I laughed a lot