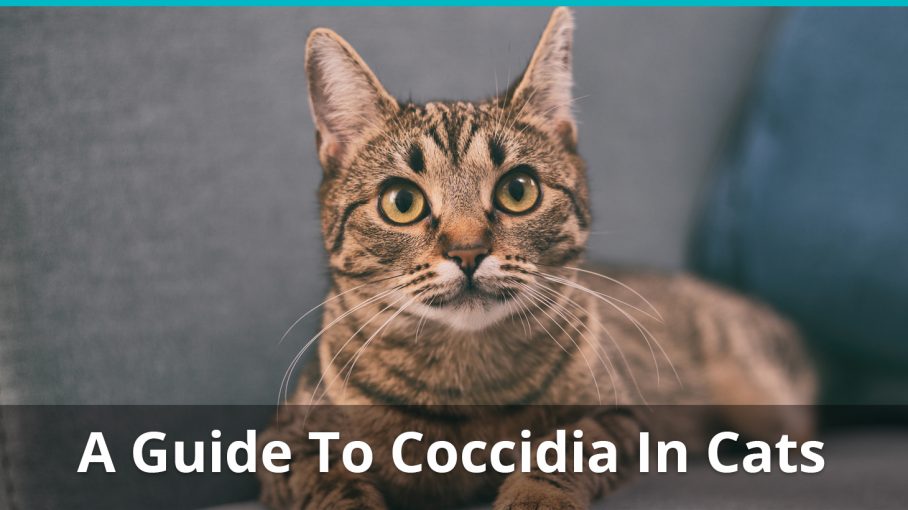 Coccidia In Cats And Kittens: What Is It, Symptoms, Treatments, And More

Cats are among nature’s best hunters. They live all over the globe and some of them have adapted to extremely harsh weather conditions in places like Norway and Siberia.

That, however, doesn’t mean that they are invincible. Felines can contract a variety of diseases. Many of them are similar to the ones we, human beings, can contract.

Allergies, common colds and digestive disorders are just as common for kitties as they are for us.

On the other hand, there are also some other, more dangerous health issues, which can affect both humans and cats. One such issue revolves around intestinal parasites.

Felines can contract numerous internal parasites, many of which can affect their intestines and overall excretory system. As a result, that leads to diarrhea, blood or mucus in the stools, flatulence, loss of appetite, pain and other unpleasant outcomes.

One of the intestinal parasites that severely affect cats is the Coccidia parasite, which leads to the Coccidiosis infection.

It may sound scary, as most intestinal parasites are, but you can cope with the outcomes of Coccidia if you don’t neglect the cat’s treatment. The parasite can cause life-threatening infections in felines if you don’t treat it on time. Fortunately, it’s not incurable.

What Is Coccidia / Coccidiosis?

Coccidia is a one-cell parasitic organism, which can affect cats and dogs alike. It causes an infection in the cat’s intestinal tract, known as Coccidiosis. The damage it can do and the symptoms it triggers are similar to the ones caused by worms.

As such, Coccidia is sometimes misinterpreted as a tapeworm or another type of intestinal worm. However, Coccidia is just a microscopic parasite, which “nests” among the kitty’s intestinal lining cells.

There are various types of Coccidia, with Isospora Rivolta and Isospora Felis being the most common ones.

How Common Is It?

The parasite is quite common for felines of all breeds. It’s mostly present in newborns and young kittens because their immune systems are underdeveloped. However, it can also affect adult felines, as well as their senior counterparts.

Can Humans Get Coccidia From Cats? Can It Be Transmitted?

The most common types of Coccidia in felines or dogs cannot affect human beings.

But some of the less common types of the parasite can indeed be transmitted to their pet parents. The Cryptosporidium type is one of them.

Coccidia is most commonly found in overcrowded shelters and in stray feral cats due to lack of hygiene and healthcare.

Causes Of Coccidia In Cats

Another way to contract Coccidia is through swallowing infected animals like rodents or birds.

Lastly, newborn kittens can also get the Coccidiosis infection from their mothers. Even if they have been dewormed, they can contract the parasite from their mother’s feces. That’s why when a female gets pregnant it’s of intrinsic importance for her to be tested for Coccidia and other health-threatening parasites or diseases.

Symptoms Of Coccidia In Cats

The symptoms of Coccidia will start showing up only after the Coccidiosis infection has affected the kitty. So, what will happen to your cat if it has contracted the parasite?

Many infected cats won’t show any symptoms of the Coccidiosis infection. So if you find the parasite’s eggs in their stools, you might disregard them due to lack of alerting symptoms. However, if the infection is severe, it could lead to your beloved furball’s death.

What To Do If Your Cat Has Coccidia?

As mentioned above, an animal can be infected without showing any telltale signs of the infection. If you’re suspecting something’s wrong with your kitty, keep an eye on the way it’s behaving.

Is it defecating properly? Are there any mucus-y bits in its feces or things that might look like tiny eggs? Is the cat drinking the same amount of water daily or is it drinking more than usual? Does it seem like it’s experiencing any pain in its abdomen area? Is it eating grass or trying to vomit? Has it been in contact with other animals since its last parasite test?

If any of the aforementioned symptoms are present, you need to call your vet’s office. Be as descriptive as possible and take the cat to the doctor at your earliest convenience.

If your kitty is adopted and it has never been tested before, it could still be infected, even if it hasn’t been in contact with animals outside your home.

Treatment: How To Treat Coccidia

You can treat the Coccidiosis infection if you spot it on time. Your vet will administer medication to kill the Coccidia parasite.  From there, you’ll have to follow the treatment plan thoroughly to make sure the infection doesn’t harm your kitty any further.

Drinking lots of liquids is of intrinsic importance for the cat’s well-being. The infection has probably dehydrated it. A change of diet is also possible if the vet believes the cat needs a new nutrition plan.

Some cats with severe cases of Coccidiosis need to be hospitalized for a week or two. The amount of time depends on the severity of the infection.

Even in mild cases your kitty may need to get weekly fecal tests after the parasite has been killed. In some instances, the vet may prescribe additional medication, which you need to administer at home to help your pet fight off the infection.

If you’ve adopted the kitty from a shelter or a breeder, you should immediately warn the original owner. There is a possibility the Coccidiosis infection in his/ her other cats.