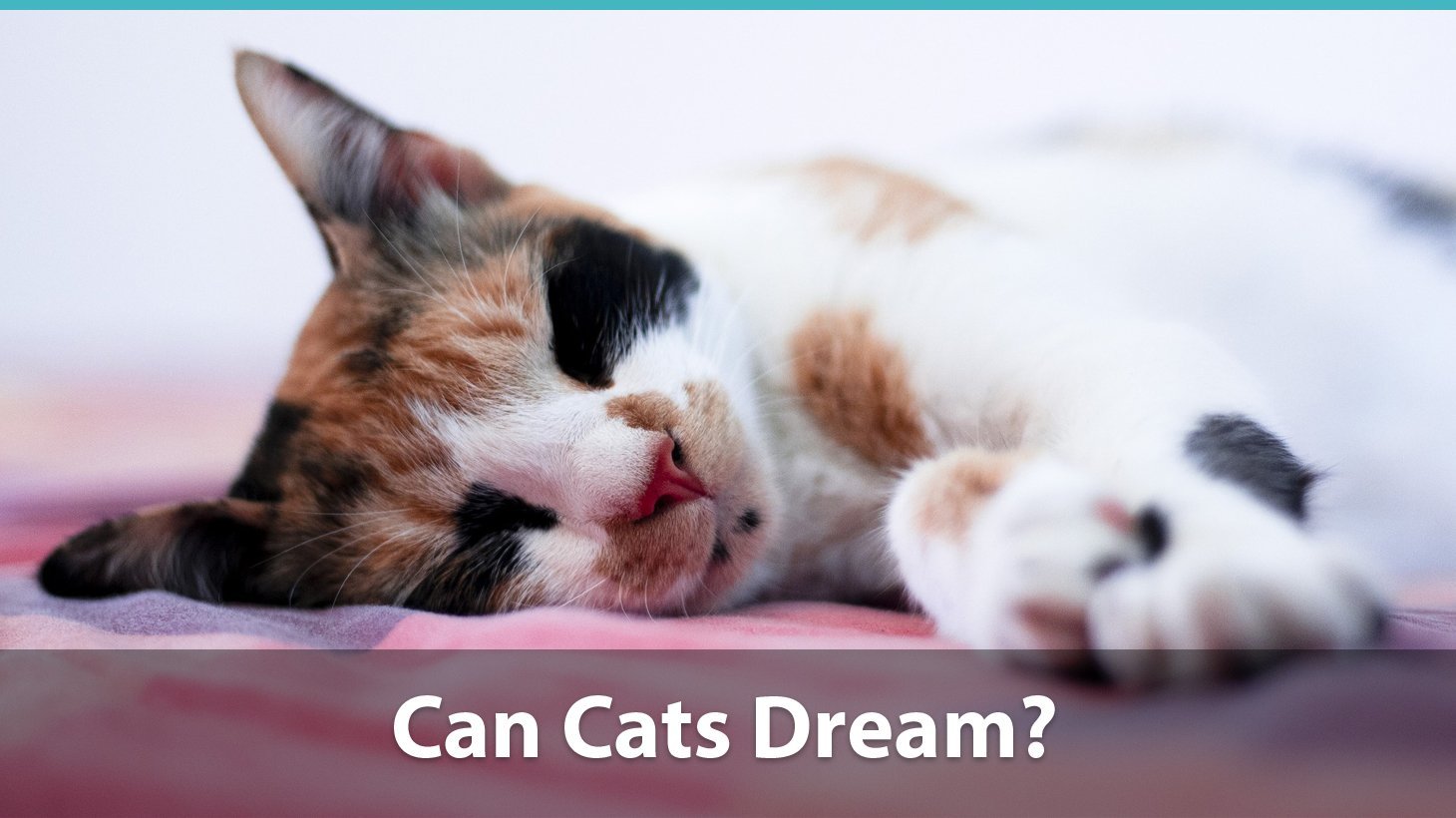 All felines on the planet love to sleep.

In fact, they do it more often than any other species of domestic pet.

Young kittens sleep through 20 hours of their entire 24 hour regime. Older kitties can snooze for up to 16 hours a day.

But can they dream while doing so? Or are they just relaxing in a blissful, blank slumber?

If you’ve ever monitored your cat, you’ve probably seen her twitch, move her whiskers, snore or produce some other unexpected and odd sound. And you might have also seen the kitty change its sleeping position without waking up at all.

It must all mean cats do dream, right? Otherwise why would they make any movements or sounds at all?

So, Can Cats Dream?

And for quite a while researchers weren’t able to prove it, but thanks to present-day technology, we now know that felines, canines and other animals can experience dream-filled slumbers.

Just like us human beings, cats go through different phases in their sleep, including REM sleep, which is when most dreams occur.

The REM phase comes with vivid, long-lasting dreaming sequences. Even though kitties can also dream in other sleep stages, if you’ve ever seen your pet’s whiskers, vocal cords, tail and paws “wake up” during a nap, then your precious furball is probably going through a REM cycle and dreaming about something. Non-REM dreams are often toned down, fragmentary and less tangible than the vivid REM dreams.

Kittens go through long and frequent phases of REM sleep in their first few months.

That’s why you’ll see more prominent muscle twitches in the sleeping cycles of youngsters rather than in adult or in senior cats.

As the kitty grows, the daily/nightly REM sleep significantly decreases – as does the amount of hours which the cat will spend in napping.

What Do Cats Dream About?

Asking what cats dream about is kind of asking what cats think about. The answer lies in their unpredictable, curious and often misunderstood nature.

Sadly, we won’t be able to fully understand what our cats dreamt about during their last nap. We could always ask them, but we’ll only get a meow – if we’re lucky enough. Hopefully, technology will evolve to such a point that one day we’ll have useful apps that can accurately translate each meow into coherent human speech. Imagine!?

Can Cats Have Nightmares?

But they sure don’t dream about politics, cataclysms and other alarming things they saw or heard on TV. They aren’t bothered by global climate crises, financial troubles, employment and other common problems that spark fear into people’s lives.

Nevertheless, that doesn’t mean that they can’t dream of scary stuff.

Cats can experience a wide arrange of negative emotions and seemingly trivial situations can leave a strong impact on them.

For example, if your pet is twitching and fidgeting in its sleep, it could be having a frustrating dream about the bird it saw through the window and how it couldn’t catch it.

On the other hand, cats can have nightmares related to truly unpleasant things that have happened to them in real life. For example, separation anxiety, painful landings, fights with other animals and other experiences can induce nightmares.

Rescued animals, which have spent some time on the streets, in overcrowded shelters or among abusive pet parents, are more likely to have nightmares even if they’re currently residing in safe, happy and relaxing surroundings.

Moreover, kittens usually have nightmares more often than their adult counterparts due to the more frequent REM phases.

Seniors can also have more frequent nightmares than adult cats. When their days get painful due to compromised health, it’s possible for the suffering to haunt them in their dreams.

But don’t think that cats aren’t intelligent enough to know that once they wake up everything will be back to normal!

Bottom line is, your kitty will have troubled dreams every now and then. There’s no need to stress too much over it.