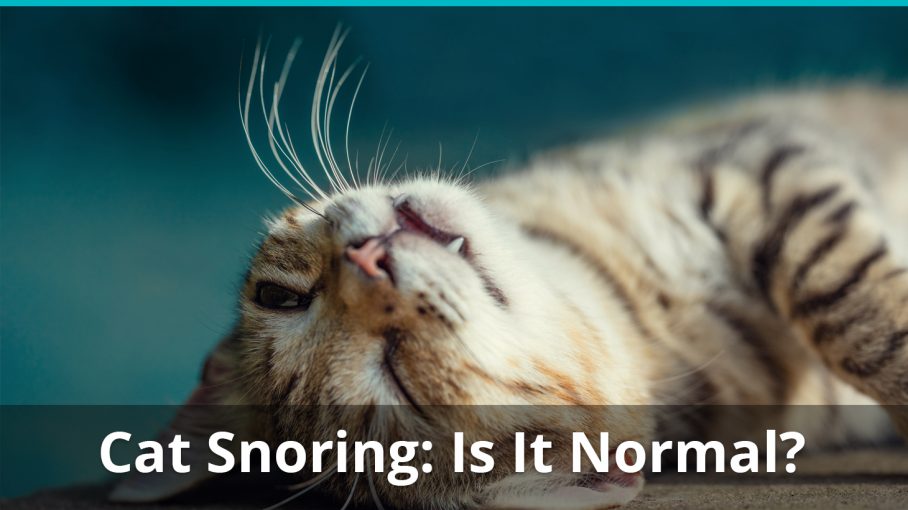 Cat Snoring While Sleeping: Is It Normal To Sound Like That Or Should I Be Worried?

Felines may be among nature’s best hunters, but that doesn’t mean they don’t love sleeping all day long.

In fact, cats can snooze for up to 20 hours on a daily basis, especially during kittenhood. Adults and seniors can nap for anywhere between 12 and 16 hours each day. But even though they can zzz for so many hours, it doesn’t mean their sleeping is uneventful.

Cats can do a whole lot of things while sleeping. They can dream and have pleasant or nightmarish visions, they can nap and still be on alert, and they can also fall into extremely deep slumbers in the most uncomfortable positions known to mankind. And some felines can even snore in their sleep.

Is Snoring While Sleeping Normal For Cats And Kittens?

Snoring is normal and quite common for some cat breeds. If your feline pal happens to have a short-nosed flat face, it’s normal for it to be snoring. Persians and other flat-faced breeds with short nasal passages do it more often than you think.

When the cat’s upper airways (nose and throat) are blocked, the passing air results in vibrations and snoring.

Light snoring sounds are normal even for non-flat-faced breeds. However, if the sounds are growing louder and are accompanied by troubled breathing, there may be bigger issues at hand, and the cat may have an undiagnosed health condition.

Like humans, cats snore when there’s some sort of distress to their respiratory system. If the kitty is snoring when it’s awake, that’s definitely an indicator for trouble. Here are the most common reasons for snoring in cats:

A common problem for many domestic cats is obesity. It can lead to a variety of health-threatening conditions and can significantly shorten a kitty’s lifespan. Obesity can also cause snoring, regardless of the cat’s breed or age.

The extra pounds  put a lot of strain on overweight cats’ nasal passages. As a result, their breathing during sleep becomes troubled. Due to the buildup of fat around the upper airways, breathing becomes difficult when air can’t flow through the cat’s respiratory system naturally. Obese cats can also have breathing problems when they’re fully awake.

Conditions like feline herpes and other viral infections can easily cause respiratory issues. Some bacterial and fungal infections can also lead to breathlessness, wheezing, panting, coughing, and snoring.

If your own furball is suffering from some sort of infection, there will most definitely be other telltale signs apart from the snoring. If there are other respiratory problems with the cat when it’s awake, you should immediately consult with a vet.

Foreign Objects In The Respiratory Tract

Cats are curious and often unpredictable by nature. Unfortunately, nobody can look after their feline pet 24/7. So, it’s possible for a kitty to be suffering from respiratory issues if there is a foreign object lodged somewhere in its respiratory tract.

Regardless of how finicky your pet is towards its food, it might have swallowed part of a toy or something else. Foreign bodies apply additional pressure on the nasal passages and often result in snoring, wheezing, and coughing. If the foreign object is too large, it may require removal through surgery.

Despite your kitty’s cat bed’s coziness, the way it’s lying might be causing problems with its respiratory system. The feline’s body is enviably agile and cats often sleep in the most unbelievable positions. If positioning is the cause for the snoring, you’ll know it immediately, because the snoring won’t be a persistent occurrence.

Last, but not least, is another type of health-based problem that can result in snoring – growths. Polyps, cancers, tumors and other types of growths in the cat’s respiratory system will block airflow to its nasal passages. As a result, the kitty will definitely have trouble breathing in its sleep.

If your pet’s snoring is light and occurs only from time to time, there’s no reason to panic. However, if the cat has started snoring all of a sudden and it sounds painful, you should see a doctor. When it’s experiencing other respiratory issues (panting, breathlessness, coughing, wheezing), that’s a clear indicator that there’s something wrong with your feline pal’s health.

And lastly, even if you own a flat-faced kitty like the Persian and its snoring sounds troublesome, don’t hesitate to call your vet’s office. Neglecting an undiagnosed health condition can have a fatal outcome for your precious furball.