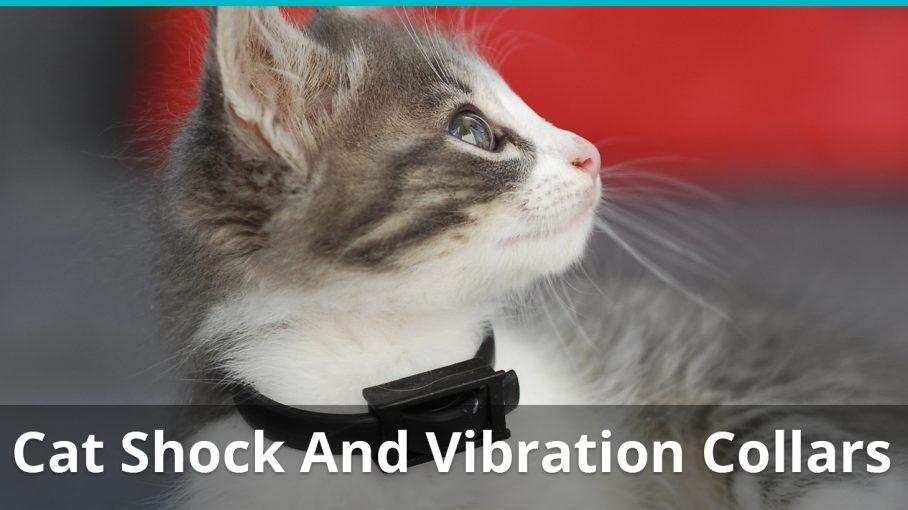 Electric Shock Collars For Cats And Kittens: Are They Safe? What Are The Best Ones? Are There Alternatives? 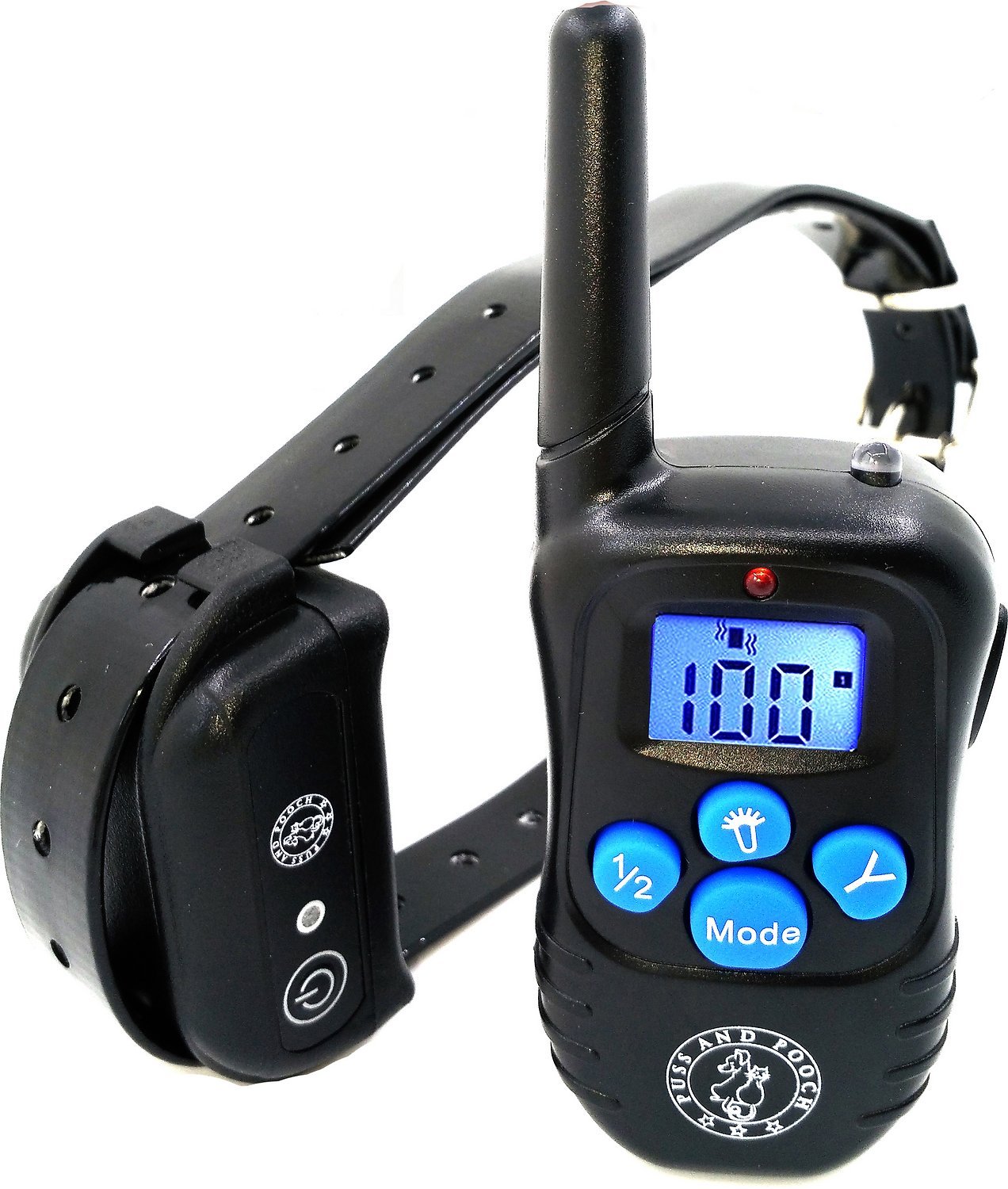 VIEW BEST PRICE
Puss and Pooch
Puss and Pooch is our top pick because it's a safe and humane electronic collar that allows you to decide what works best for your pup.
FEATURES

As cute and fluffy as cats are, sometimes they can be a pain in our necks. Mood swings, capricious whims, and a constant need to explore the forbidden (and sometimes even dangerous) corners of their homes – all of these things can be quite problematic for cat owners.

Many pet parents even seek the help of professional animal behaviorists when it comes to understanding and taming their feline companions. Because let’s face it – even though cats have been domesticated for many centuries, they still tend to act like wild animals.

A popular training method for canine pets is warnings or light “corrections” via shock collars. And that raises the question – when nothing else works, can you use shock collars on cats too?

What Are Electric Shock Collars?

Shock collars have been the subject of controversy for many years and for good reasons. Not only can they be extremely dangerous, but in many cases, they don’t produce the desired effect. On top of that, some think that using them is considered an act of animal cruelty.

Just as their name suggests, these devices are animal collars that deliver electric current. There are three types of shock collars:

These collars deliver electricity to the pet’s neck (or vibrate, or make a loud noise) when the owner activates the shock feature via remote control. Also dubbed remote trainers, they’re similar to pet clickers and require the owner to monitor the cat’s deeds.

Motion-sensitive collars are suitable for preventing pets from entering a certain area, such as a room. They are meant for restraining purposes so the pet won’t enter a forbidden room or try to escape, much like how an invisible electric fence works to keep a dog on your property without a physical fence.

Sound-sensitive collars deliver electric shocks as punishment for loud noises, such as barking.

Arguments Against Shock Collars For Cats

There are many reasons why using shock collars on a cat could be a bad idea. For starters, they are illegal in some parts of Europe and Australia.

What’s more, they actually aren’t always as effective as many people think. The feline brain doesn’t work well on the punishment system. Instead, cats learn the meanings of Yes and No through positive reinforcement training techniques.

Feline furballs prefer doing something if they get a reward for it. In other words, bad behavior shouldn’t result in punishment – it just needs to be discouraged by tricking the cat into learning that good behavior equals a reward.

Treats, verbal praises, petting, and other rewards help cats so much more than any form of verbal or physical punishment.

Even if the collar delivers a low voltage, it can still affect the nervous and cardiovascular system of kittens, adults, and senior cats alike. Shock collars intended for large pets can even be fatal for a cat.

Lastly, regardless of the type of shock collar an owner is using, it will pose dangers for the pet if the owner isn’t experienced with these devices. Overdoing it is life-threatening and it often results in a negative outcome because cats just don’t respond well to punishment. Even if it doesn’t hurt the pet’s health, a shock collar can make the most tolerant cat out there hate its owner.

And needless to say, cats can be extremely vengeful. From ruining your furniture pieces and carpets to attacking you – your feline friend will certainly find creative ways to become a pain in your neck.

Can Shock Collars Be Effective On Cats?

As mentioned above, many people consider using shock collars as a practice of animal cruelty. Nevertheless, some pet parents might opt for using these devices on extremely problematic cats. So, if they are available on the market and people are using them, do they really work?

It depends on your cat, your own behavior, the type of collar, and many other external factors.

Motion-activated ones work when you need to keep the cat away from a certain area. However, they work only because they inflict pain, fear, and stress on your pet and because the cat can’t tell you’re the one doing it.

Inflicting physical and emotional pain on your cat can not only be seen as cruel, but the trauma and the stress can make it vulnerable to feline herpes and other health-based problems.

How To Effectively Use Training Collars For Cats

However, many collars actually have a more humane feature (maybe two, in some cases).

I’m talking about vibration and sound.

Instead of using the shock setting on your training collar, you can actually choose to give a gentle vibration to warn the cat or use a loud beeping sound.

Usually, this just requires you to press a button to switch between shock, vibration, and sound.

If you choose vibration or sound, you bypass pretty much all of the negative stuff we’ve been talking about here, and you might actually find that you get a really useful tool in your training regimen!

Where Can I Get The Best Shock Or Vibration Collars For Cats?

Alright, so you know all the risks and you are sure that you will be one of the few pet parents who use one of these things responsibly. Or, you’re just going to use the vibration/sound function.

While some collars aren’t meant to be used for cats (too strong, or they don’t have anything but shock settings), we have found some amazing options, which we’ll give you below.

Because they’re banned in some places and are controversial, you probably won’t be able to find cat shock collars at your local pet store. In some cases, cat owners even opt for shock collars manufactured for small dogs.

Puss and Pooch’s shock collar for small dogs is just about the only device like this that is suitable for cats. It’s specifically designed for smaller animals, and most cats should fit into the collar with no problem.

The collar actually has three training forms of “punishment”:

Meaning, it can give your cat a clear warning with vibrations or with beeps without the need to actually shock it with electricity.

Compared to many shock collars out there Puss and Pooch’s isn’t pricey, especially bearing in mind the two additional training features you can use (vibrate and tone).

What’s more, it suits dog breeds which are as small as eight pounds. As such, it would easily fit on a feline neck. It’s also water-resistant, so it will work for cats who go outside, or even during bath time.

Last, but not least, the batteries on the receiver and the controller are rechargeable, so the product also offers the advantage of not having to spend money on new batteries after each use.

Overall, this is about the only product on the market that is available for smaller pets like cats. Luckily, it actually works, so we’re happy to recommend it!

The collars produce beeping sounds whenever your feline furball is near a forbidden area. Right after the beeping, they deliver an electric current, which can last between 3 and 15 seconds. If the cat doesn’t move away, the device will automatically stop the electric transmission after 15 seconds for safety purposes.

The motion-controlled collars use low voltage and are suitable for cats with 6’’ to 28’’ wide neck diameters.

Although the kit isn’t cheap, it can serve a multi-cat household. Another advantage of PetSafe’s product is that it has an adjustable barrier range. If you’re one of those people who allow their cat to roam the outdoors, these barriers can help you prevent your fluffy friend from escaping your yard.

Moreover, the collar also works with PetSafe’s threshold barriers, so it can keep the kitty away from doorways and staircases.

Alternatives To Shock Collars For Cats

Instead of subjecting your beloved furball to a shock collar, you can opt for alternatives like we suggest below. Sound machines and pheromone sprays can be just as efficient as a cat shock collar would be.

However, they are much less harmful to your pet’s mental and physical health. And on top of that, they are definitely much cheaper!

Here are the best alternatives to shock collars.

#1. Sentry’s Stop That For Cats (MAY BE UNAVAILABLE – SEE BELOW FOR ANOTHER OPTION)

Among Sentry’s many nifty pet products is their Stop That spay for cats.

It’s a calming pheromone spray, which doesn’t inflict any mental or physical injury.

On the contrary – the spray makes the cat less excited, dulls its headstrong determination, and calms it down, thus putting an end to whatever destructive or unwanted behavior it was displaying.

What’s more, the spray has the pleasant scent of lavender and chamomile, so it won’t leave nasty odors in your house or apartment. And its diffuser doesn’t produce any startling sounds.

The Stop That spray is for manual use only. In other words, you have to spray your cat with it on your own. However, the pheromones won’t anger the cat and as long as you’re using it from a distance of 12-18 inches, your pet won’t even feel the airburst.

Unlike the previous spray, PetSafe’s SSSCat is fully automated.

It’s motion-controlled and ideal for keeping the cat away from forbidden areas of your home. The inbuilt motion detector can cover a surface of up to 3 feet, whereas the spray nozzle is fully adjustable. Compared to a motion-controlled shock collar, the spray is much more affordable and can be just as efficient.

The detector works with replaceable batteries and the spray is good to go for 80-10 bursts. The manufacturer offers replaceable spray cans with odorless and stainless compressed HFC 134a gas, which is painless, but effective.

One downside to this particular shock collar alternative is that it’s annoying for cats. Thus, if it irritates your pet too much, it may provoke unwanted behavior in other, accessible parts of your home.

Regardless of whichever option you decide to choose for your feline furball, keep in mind that shock collars are cruel. Moreover, they pose a  real danger to your pet’s physical and mental health. Instead of opting for electric shock therapy, try to train your kitty with positive reinforcement techniques. Most cats will go above and beyond to get a tasty reward for doing something good.