Get 20% Off + Free Shipping on Blue Buffalo Cat Food

Here’s a few important points to consider for this particular line:

Each recipe below includes its related AAFCO nutrient profile when available on the product’s official webpage or packaging: Growth (G), Maintenance (M), All Life Stages (A), Supplemental (S) or Unspecified (U).

The star rating is a rough average of all of the flavors in a single line of food. If an individual recipe scored lower or higher, we will mark that below, next to the flavor. 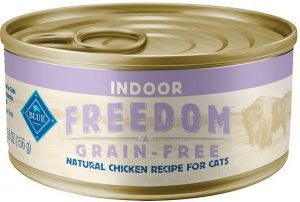 Blue Buffalo Freedom Indoor Chicken was selected to represent the other products in the line for this review.

Ingredients in red are controversial or of questionable quality.

The first ingredient in this cat food is chicken. Good.

While quality of the individual ingredient can vary, chicken is a very good protein source for cats.

It’s also important to note that chicken contains about 70% water, so when it is processed and cooked for use in cat food, it will become a smaller part of the total recipe.

Instead of using water for processing, chicken broth is added for moisture.

Broth may contain vitamins and nutrients from the original animal (chicken, in this case), that water would lack.

This is usually a sign of a high quality food.

After water, the third ingredient is chicken liver. Good.

Liver is an important organ meat that your cat would eat in the wild to get extra protein, vitamins, and minerals.

This is usually a sign of a high quality food.

Even though eggs are not meat, they are a highly digestible form of protein.

In fact, they are one of the most complete, bioavailable forms of protein for both humans and cats.

As long as it is not the main protein ingredient, the addition of egg is a quality ingredient

These are typically used as filler in grain-free recipes. They are not biologically appropriate and may cause digestive upset.

After natural flavors, which are fine, the sixth ingredient is sweet potato. OK, but with reservations.

Normally sweet potatoes are a good source of carbohydrates and fiber, with less sugar than beets.

However, cats do not require carbohydrates like this, and while it won’t necessarily hurt the cat, it is not biologically appropriate.

It may be hard to digest, and is unnecessary.

The seventh ingredient is carrots. Good.

The beta carotene in carrots turns into vitamin A, which is a useful antioxidant compound.

However, cats can’t turn much beta carotene into vitamin A like we can, so much of it is stored for growth or cell reprouction.

Therefore, carrots are most useful for kittens or senior cats.

This recipe includes a number of other ingredients, but once you get down this far, none of them will be in large enough quantities to make a real difference, except for the added vitamins and minerals.

However, there are a few things you should know about.

It includes cellulose, which is a filler high in insoluble fiber. It’s typically wood pulp (sawdust) from pine trees. Too much insoluble fiber can interfere with digestion and inhibit protein and nutrient uptake.

In small quantities, like those in cat food, it should be a harmless ingredient.

However, some research has shown that including guar gum in a commercial cat food “had a significant negative effect on apparent protein digestibility in many of the cats and tended to depress apparent fat and energy digestibilities.”

While not heavily substantiated beyond this study, it might mean your cat needs to eat more protein to make up for the lower digestibility.

Carrageenan is a very controversial ingredient. It is derived from a red seaweed.

One of it’s forms, degraded carrageenan, is a potential carcinogen.

While degraded is not used in food applications, some people have concerns that the ingredient could become degraded from a cat’s stomach acid, therefore potentially increasing cancer risk.

It is likely fine, but with so many other options on the market, many people choose not to take the risk.

To read a more in depth article about any of the ingredients listed here, check out our Cat Food Ingredient Wiki (currently under development).

From top to bottom, this is an average wet product.

Meat is the first ingredient, and some organ meat is used. The fillers are mostly whole foods, but there are some controversial ingredients included.

Three out of the five recipes have decent macronutrient profiles (protein, fats, carbs), and are likely mostly meat.

This is a decent example of a dry food you should be feeding to your cat.

Of the three we’ve rated 3.5 stars, meat is most likely the main ingredient, and we can therefore say it’s a mostly meat-based cat food, which is biologically appropriate for your kitty.

Compared to the other 2000+ foods in our database, this food has:

Because meat comes first, most fillers are whole food plant ingredients, and most macronutrients are decent, our average rating for this brand is 3.5 stars.

Recommended as a decent, but not perfect, option.

We do not believe that a recall indicates a low quality food or company, and we respect the fact that sometimes things happen that cause a manufacturer to recall a food.

Usually these things are non-life-threatening, and we think it’s important to take a moment to be thankful about just how few recalls there really are in the industry, considering the enormous volume of food produced.

However, we do believe that a history of recalls may point to a larger issue with a company, and that discerning consumers want to know who they’re buying from, especially when it comes to something as important as the food you feed your beloved cat.

Here is a list of recalls that have affected the Blue Buffalo brand in the past:

If you want to stay up to date on the latest recall information affecting your cat’s food, sign up to our email list and receive an email every time a recall is announced. We’ll also let you know about any updated ratings, recipe changes, or new cat foods on the market. (Our alert system will be launched shortly, check back soon.)

We recommend purchasing your pet products from Chewy.com. They continually prove that they walk the walk while talking the talk, and I’ve never dealt with a more dedicated pet-parent base of people than those who work at Chewy.

Plus, they offer 20% off and free shipping on lots of orders.

Get 20% Off + Free Shipping on Blue Buffalo Cat Food