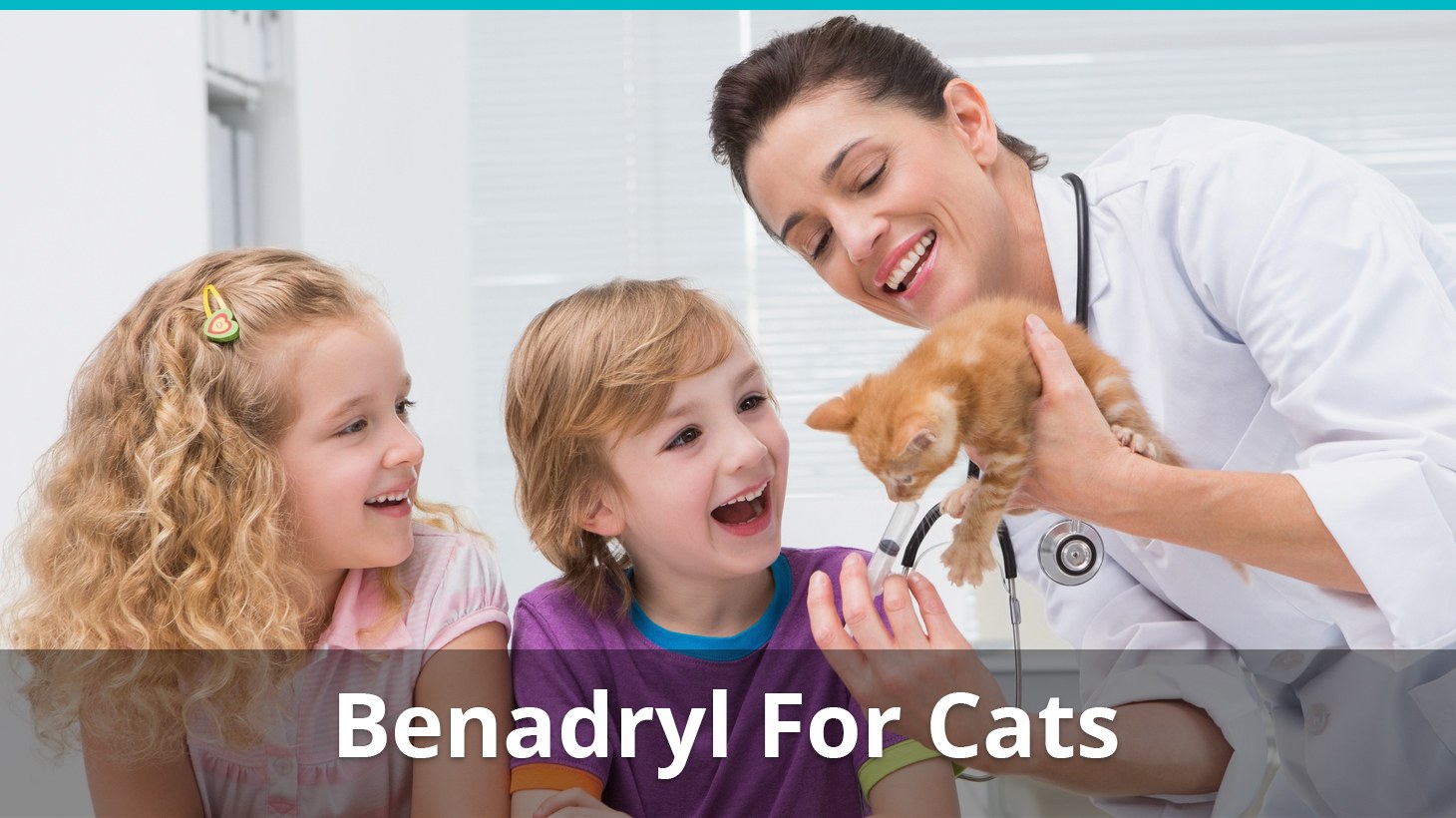 Benadryl Dosage for Cats | Can You Give It For Allergies, Itching, Or Sedation?

Benadryl is among the most popular products you’ll find in any pharmacy. Its numerous applications often come in handy when you wish to treat your allergies, runny nose, common cold, skin rash, insomnia or motion sickness.

You may or may not have heard that some pet parents give Benadryl to their canines. So it only comes natural to ask yourself if it’s also safe for your feline furball.

By default, medications and other health and wellness products manufactured for humans shouldn’t be given to cats, especially when it comes to NSAIDs (non-steroidal anti-inflammatory drugs) and other similar medications. Nevertheless, there are a few human-based drugs, which are safe and efficient as pain reliefs for feline creatures.

Benadryl is one of the numerous medications produced for human consumption, which are also considered safe for cats.

Can you give Benadryl to your cat? If so, how much and what dosage?

Yes, you can give Benadryl to your feline pal.

It’s not only approved by veterinarians, but it’s also administered by them. Of course, your cat’s body differs in many ways from your own. As such, it’s not safe to use the exact same dosage on your cat as you would take yourself.

The drug’s active ingredient is diphenhydramine, which is indeed safe for animals. It can be administered in various forms – liquid, crushed or as solid pills – but always orally.

Some vets suggest giving a dosage of roughly one milligram per pound of body weight.

Remember, when it doubt, contact your vet! Some veterinary pharmacies may also be able to mix the solution with a flavor your cat will actually enjoy, like chicken, if she doesn’t like the taste of it plain.

When do cats need Benadryl?

There are three main reasons to give your kitty Benadryl:

The most common cases in which feline furballs are in need of such medication are to combat itching or rashes caused by allergies, bugs, or anything else. Cats from all around the globe suffer from a vast variety of allergies. Benadryl can help them deal with the allergic reactions.

Some people use it during traveling or when they’re suffering from car sickness. In cases like these it works like a relatively mild sedative.

Benadryl can also be given when you need to calm down your pet when you’re moving into a new home or when you’re expecting noisy guests to visit you and to upset the kitty with their presence.

Excessive scratching, restlessness, anxiety and other similar problems can also be suppressed with Benadryl. Nevertheless, the above-mentioned rule applies here too – consult with a vet prior to giving the drug to your pet.

How to give Benadryl to your cat?

As we mentioned before, Benadryl must be given orally to a cat. There are three basic ways to administer the medication to your fluffy pal – in liquid form, as a solid pill or as a crushed powder mixed with something tasty.

Some pet parents find it easier to administer it in liquid form with the help of a syringe.

Whether you’re doing it this way or by trying to make the kitty swallow a pill, there a couple of things you should keep in mind. The first is that the cat might not like its taste and the second is that you should focus on safety – your cat’s safety and your own.

Do your best at calming the furball down before administering the Benadryl. Speak in a soothing voice, be gentle with it and don’t let your behavior hint that there’s something unpleasant coming the cat’s way. Wrap the kitty in a blanket or a towel to keep it steady and to prevent it from scratching you, but be careful not to injure it.

If you can’t make the cat take the pill or the liquid form of the drug, try crushing the pill and mix it with some tasty cat treats or with your pet’s favorite cat food.

There is no ultimate formula because each kitty is unique on its own. Thus, some cats (even if they’re from the same breed, age and size) may need smaller amounts, whereas others may need to up the dosage in order for the Benadryl to work its magic on them.

One milligram per pound is the standard safe dosage.

This means that if your pet weighs around 10 pounds, the standard safe dosage of Benadryl will be 10 milligrams. However, that doesn’t mean that the cat won’t experience any side effects or that the medication will be enough. It all depends on the cat’s organism and on how well it absorbs and reacts to different substances.

One of the things you should never do is up the dosage because the drug hasn’t kicked in shortly after ingestion. Overdosing can have severe consequences for kittens, adult cats and seniors alike. If the medication isn’t working, don’t push your luck with it. Just consult with a reputable veterinarian for an alternative solution.

The dangers of giving Benadryl to your cat

Apart from the side effects (see below), there are additional risks when giving Benadryl to your cat. Interference with other medication is one of them and it’s definitely not something you want to experiment with.

What’s more, you may be misinterpreting the symptoms your cat is showing. If the symptoms are just masking another problem, administering Benadryl won’t cure the real problem, which is affecting your pet. On top of that, the drug can actually worsen your feline pal’s overall health if it’s already suffering from some undiagnosed disease.

And in the cases of severe allergic reactions the Benadryl can worsen the issue. Most allergens cause breathing difficulties in cats and since one of the side effects of Benadryl causes respiratory problems, the combination between the allergic reaction and the drug can have life threatening consequences for the kitty.

As it is with any type of medication, there’s a probability that your pet could experience some side effects to the drug. The most common ones are as following:

Overdose can have lethal consequences for cats. In other words, it can indeed lead to your precious feline furball’s death if you’re not careful.

It’s possible for the Benadryl to interfere with other drugs if your cat is taking other medication for pre-existing disorders. As such, you should always consult with a veterinarian prior to getting Benadryl. Regardless of the medication, always make sure everything is absolutely safe for your feline friend.