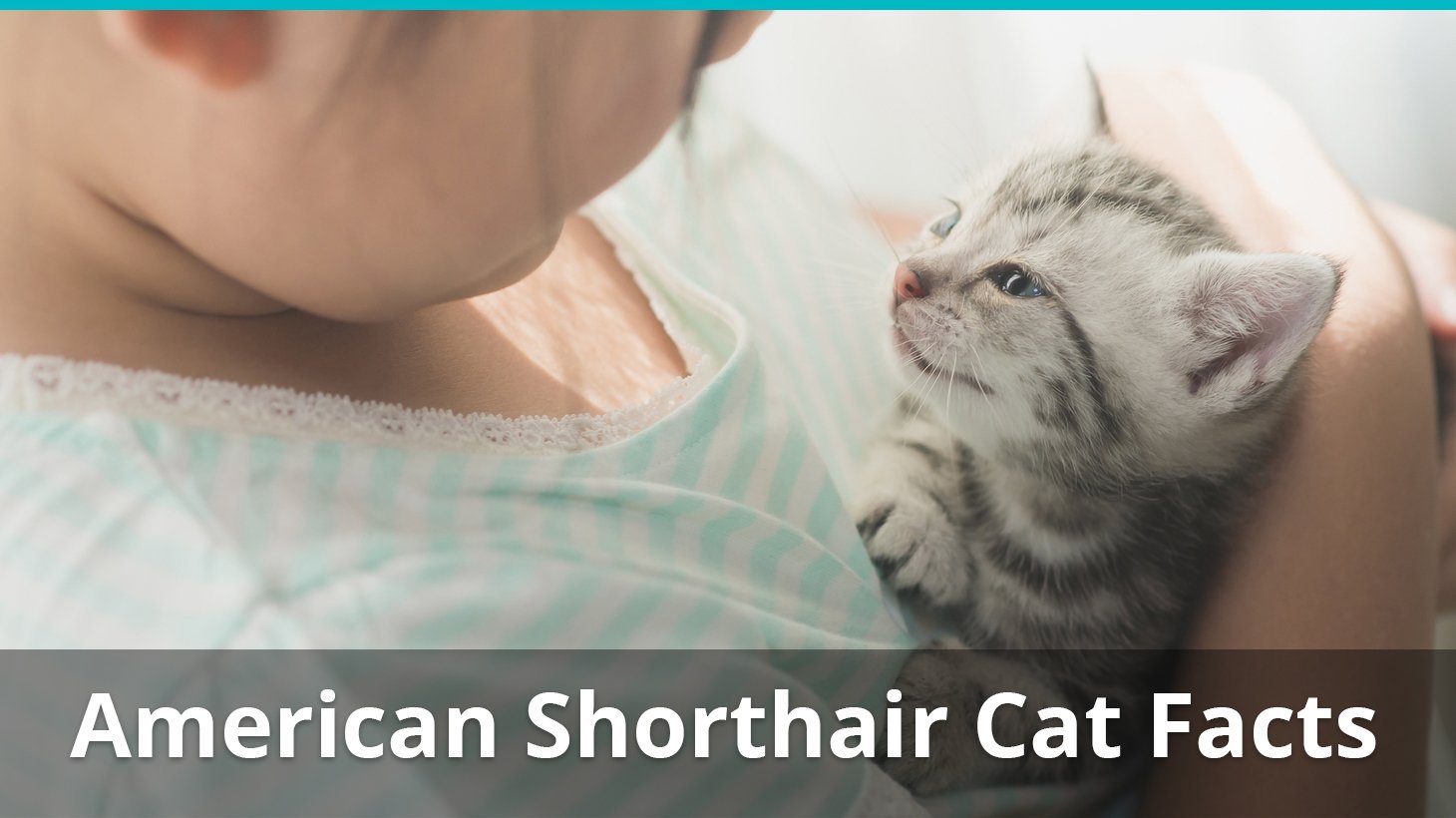 The American Shorthair is a popular feline breed, and for good reason. These kitties are not only playful, yet calm, but they are also great for big families with children.

This particular breed is the perfect cross between an independent feline and a needy one. If you’ve always wanted a social and affectionate kitty which also requires some alone time for itself, then the American Shorthair is the purr-fect match for you.

American Shorthairs are known as “working cats” due to the fact that they were once bred for the purpose of catching rodents. They have strong, robust bodies, but contrary to what their muscular build suggests, they aren’t aggressive. Not at all!

These cats are noteworthy for their calm and will make friends with everybody! Keeping them indoors will ensure a healthier lifestyle and safety from fleas and other parasites.

Another reason to keep your American Shorthair kitty strictly indoors is the fact that it may decide to make friends with a stray dog or a stranger walking down the street. And losing your beloved pet due to its over-friendliness would be truly devastating.

Here are some more interesting facts about the American Shorthair cats, most of which will most definitely make you wish you had one of these as a pet.

Contrary to the breed’s official name, American Shorthair furballs aren’t American at all.

They actually originate in Europe!

Once upon a time, European sailors started importing these creatures into North America on their ships. Due to the cats’ excellent hunting skills, they were an indispensable part of the crew because they kept the cargo safe from rodents.

They Are Colorful Creatures

American Shorthairs are quite colorful. They may not be as colorful as the Oriental Shorthair, but they come pretty close, in nearly 80 colors! That’s right, the American Shorthair is one colorful kitty! White, silver, brown, cameo, and orange are the most popular hues. The various patterns can be tabby, tortoise shell, smoke, shaded, bicolored, and so forth.

Sadly, regardless of their beautiful fur, American Shorthairs aren’t suitable for people with allergies. They don’t shed much and they have a short fur coat, but they still produce a lot of the Fel-d1 allergen agent. So if you happen to have trouble with this allergen, you should opt for another breed.

American Shorthairs are affectionate and enjoy the company of their pet parents. They are moderately independent and do require some me-time every now and then. They are happiest in the presence of their owners, but if said owners can’t play with them at the moment, they’ll find something to entertain themselves with.

Unlike other breeds, which stay loyal to only one owner, the American Shorthair will befriend all family members and will love them equally.

And unlike other more territorial breeds, these cats will show amicability even towards complete strangers!

They’re Gentle And Laid Back

The American Shorthair kitty’s temper is part of what makes these cats so desired all over the world. Aggression and destructive behavior are foreign to this particular breed.

These cats aren’t fascinated with climbing on top of the curtains or exploring high counter tops. They remain gentle even during playtime. Though accidents do happen, of course, a pee stain on the carpet or a broken vase are the last things you should expect from an American Shorthair.

Unlike other demanding breeds, American Shorthairs can be left home alone for a short period of time. Their laid-back and placid tempers mean they won’t ruin your house or apartment.

If you think you can’t leave your particular cat home alone, you can opt for an interactive pet camera. You can monitor the kitty from afar, feed it treats, and even play it recordings of your voice. 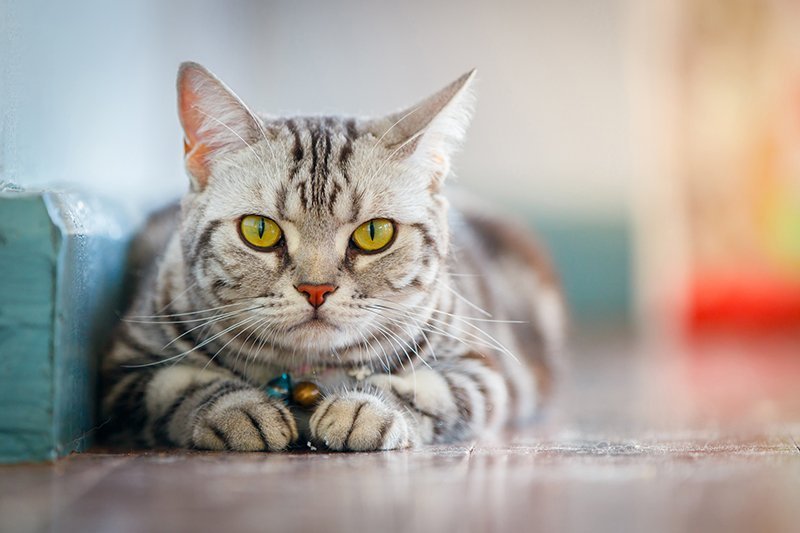 American Shorthair kittens of all ages have truly stunning eyes. They are well-known for their distinctive round faces and notoriously short ears, but their eyes are what make their facial appearances extraordinary.

This breed’s eyes come in a variety of colors. Their irises can be blue, green, hazel, gold, copper, and even heterochromatic, or in other words – they can be odd-eyed.

This breed is particularly playful. But don’t misinterpret their playfulness as destructive behavior! The gentle nature of the American Shorthair and its lack of over-curiosity make this particular breed rather meek and placid.

Stocking up on cat toys is essential if you wish to welcome an American Shorthair into your family. If you don’t offer cat toys or engage in playtime, this amiable kitty will make its own toy out of whatever it can find.

They’re Suitable For Kids And Other Pets

American Shorthairs will tolerate even small children who don’t know how to properly behave themselves around a cat. These creatures enjoy receiving attention and will express equal fondness towards all members of your family.

Moreover, they are also suitable for living with other pets, such as dogs. Of course, not all dog breeds can co-exist with a feline. Amiable and laid-back dog breeds are ideal companions for American Shorthairs. Make sure you’re introducing the two pets in a safe and controlled environment to avoid any unpleasant accidents.

Even though American Shorthairs are muscular and aren’t lazy, they are more prone to becoming obese than most cat breeds. So it’s important to monitor your kitty’s weight and make sure it has a well-balanced diet consisting primary of dried cat food.

This feline breed requires exercise on a daily basis. Interactive cat trees, ball toys, laser chasing games, and so forth offer great ways to exercise. Another idea is to teach your American Shorthair how to walk on a leash. And yes, walking your cat on a leash is indeed possible. You just need a proper leash and harness, and a lot of patience.

This breed has medium-level grooming requirements. American Shorthairs have a thick and short fur coat. Grooming comes easily with these furballs as long as it’s done regularly.

The breed is well-known for its moderate shedding and lack of matting. You’ll need to brush your American Shorthair kitty a few times a week in order to remove dead fur. Bathing your cat and maintaining its dental hygiene are also important.

How much do American Shorthair cats and kittens cost? Price analysis and buying guide.

Even though American Shorthairs are among the most popular cat breeds in the US, don’t think you’ll be able to get one for as low as $200. This is an official, pedigreed breed acknowledged by major cat organizations all over the globe. So, the real American Shorthair cats and kittens cost as much as some of their more refined and elegant cousins.

If you want to buy an American Shorthair, here’s my pro buying guide tip – search for a cat or kitten in shelters. Use a reputable vet’s services and make sure the kitty is healthy. The doctor and shelter’s fees will cost you less than going to an acclaimed breeder.

Unlike other domestic breeds, American Shorthairs can be found literally all across the US. Due to their widespread popularity, many of them do end up in shelters, regardless of how pedigreed they are. If you want to invest in such a feline furball, be careful not to get cheated into purchasing one from a possibly overpriced breeder’s litters.

Health Problems To Watch Out For

These kitties are considered an overall healthy breed. Their robust bodies reflect their good health. They are far less likely to suffer from cancers, tumors, and organ dysfunctions compared to other feline breeds. These kitties may still face some health problems, including teeth and gum diseases, and hypertrophic cardiomyopathy, a feline heart condition which can be congenital or not.

As they grow older, they will eventually be prone to developing more diseases, of course. However, the American Shorthair’s approximate lifespan is far longer than most cat breeds. They can easily live up to 20 happy years.

American Shorthairs are a sheer pleasure to be around. Their friendly, playful, and placid tempers, along with their lovely physical appearances, are two of the main reasons why they’ve grown so popular.

Make sure to never skip a scheduled appointment at the vet and always monitor your kitty’s weight and health. Devoting yourself to your American Shorthair won’t go unrewarded as these feline furballs really know how to make their owners feel loved and cherished at all times.